The discovery of dinosaurs and a species considered “dinosaur predecessors” together in the same Brazilian strata has shown dinosaurs were slow to establish their planetary dominance. Related non-dinosaur reptiles were thought to have died out rapidly with the rise of such fearsome competitors. However, this discovery suggests true dinosaurs were not so much better adapted to the era's conditions as to wipe out their competition immediately.

The Santa Maria formation in southern Brazil was laid down 237-228 million years ago, and includes the oldest well-preserved dinosaur remains we have found. As significant as this makes the deposit, the discovery of lagerpetids in the same layers as some of the early true dinosaurs could be even more important for our understanding of the Triassic era. Lagerpetids are members of the clade dinosauromorpha, which includes dinosaurs and birds, but also some forerunner species.

In Current Biology, a team led by Dr Max Langer of Universidade de Sao Paulo describe bones from four individuals found at Buriol Ravine, Brazil. Two of these were dauropodomorphs, a group of dinosaurs famous for members such as diplodocus and brontosaurus.

The dauropodomorphs have been classified as members of a new species, dubbed Buriolestes schultzi, although it is possible that the smaller one is an adult of a different species, rather than a juvenile, as the authors suspect. Tail included, the larger specimen was approximately 3 meters (10 feet) long. B. shultzi appears to be the closest species we have yet found to the original sauropodomorpha, from which such Earth-shaking descendents came from.

Although the most famous sauropods were herbivores, B. shultzi's teeth indicate it fed exclusively on animals. The paper proposes that this makes it more likely that the ancestral dinosaur was a strict meat-eater, and that plants entered the diet independently in several different branches of the family. Nevertheless, the authors acknowledge this theory is based on tentative conclusions about the relationships between the new species and those that came after them.

The lagerpetids are also from a new species, which the authors named Ixalerpeton polesinensis. To the untrained eye, they resemble small dinosaurs less than a meter (3.3 feet) long, but features such as their neck arches and leg bones identify them as belonging to a more ancient category.

Lagerpetids and dinosaurs were already known to have coexisted, but only in more recent deposits from the Northern Hemisphere. In combination with similar, although more fragmentary, evidence of the supposed predecessors and true dinosaurs living together in what is now Argentina, the discovery points to the idea that the two lived side by side for much longer than previously thought. “The rise of dinosaurs was more gradual, not a fast overtaking of other animals of the time,” Langer said in a statement. 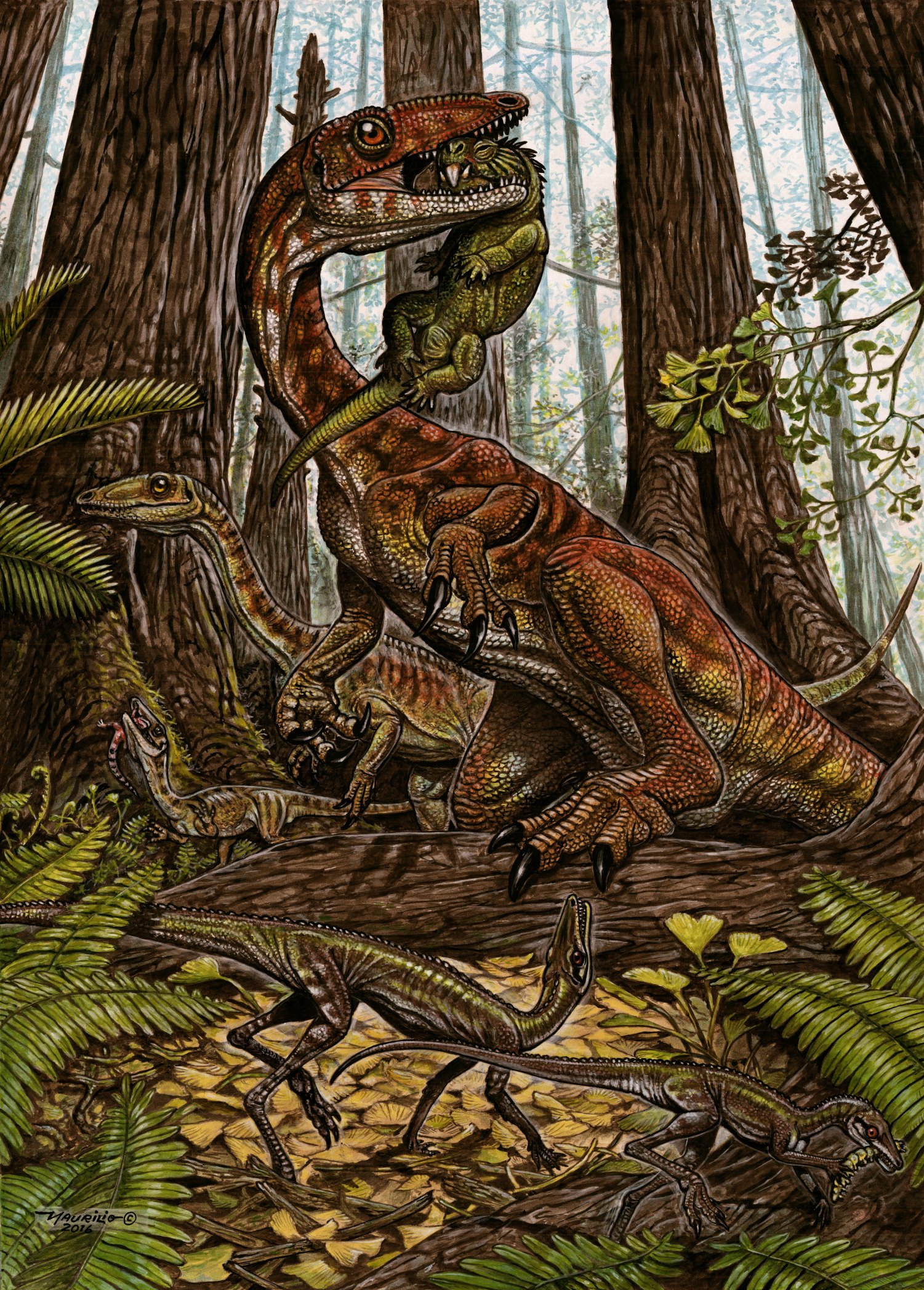 Artist's impression of the Triassic, when the specimens discovered were alive. It includes seven Ixalerpeton in the low left corner, and a large Buriolestes (at first plane, upper right corner) and with six behind. Other species in the image, which were not described in the paper, are an Aetosaur in the low right corner. Sphenodont on the tree (upper left corner), with a rhynchosaur on the ground next to it. A small rauisuchian is on the right of the large Buriolestes. Small amphibian (yellow) in the center of the image. Credit: Maurílio Oliveira