We don’t know what dark matter is. We think it exists because we see some peculiar gravitational effects on galaxies. People are looking for dark matter particles in many experiments, but astronomers are focusing on how it affects the larger structures in the universe.

A Yale-led team of astronomers has mapped the distribution of dark matter in three of the six Hubble Frontier Fields. These areas of the sky have a specific advantage that makes them optimal for this study. They are (relatively) small regions with so much matter (dark and visible) that they bend space-time itself, creating gravitational lenses.

These lenses bend the light from far away galaxies, and by study how the light path is changed, it is possible to “see” dark matter. In a paper published in the Monthly Notices of the Royal Astronomical Society, the team discussed the construction of the dark matter maps for these cosmic regions.

"With the data of these three lensing clusters we have successfully mapped the granularity of dark matter within the clusters in exquisite detail," Yale Astrophysicist Priyamvada Natarajan said in a statement. "We have mapped all of the clumps of dark matter that the data permit us to detect, and have produced the most detailed topological map of the dark matter landscape to date."

The simulation they ran closely matches the distribution of the standard cosmological model, which expects dark matter to be “cold”, moving relatively slowly around the universe. It also suggests something about these frontier fields. The team suspects they are actually in a transient evolutionary phase and we might just be getting a snapshot of it all.

While the details, like a lot of things related to dark matter, remain unclear, the expected amount and distribution of dark matter seems to match the theoretical prediction.

"While we now have a precise cosmic inventory for the amount of dark matter and how it is distributed in the universe, the particle itself remains elusive," Natarajan added.

Dark matter is believed to make up more than 80 percent of the whole matter content of the universe, but the many searches for its true nature are yet to bear fruit. 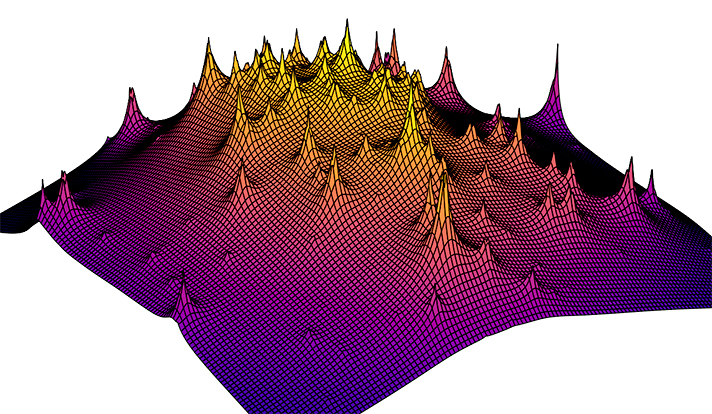 3D map of the dark matter distribution for a Frontier Field. The peaks are galaxies. Yale University.