Volcanoes are thundering, fiery forges, creating the landscape around them in explosive, effervescent glory – well, for the most part. Some are mountains made of ice, with water acting as their lava. These “cryovolcanoes” have been found on Pluto and several moons in our Solar System, and a remarkable new study in Science has dramatically revealed that they also exist on the dwarf planet Ceres, too.

Hiding in the asteroid belt between Mars and Jupiter, Ceres is 945 kilometers (587 miles) across and constitutes roughly a third of the mass of the entire asteroid belt, which makes it the largest object in that region. Dawn, the spacecraft NASA sent to investigate both the protoplanet Vesta and then Ceres, has now made its most incredible discovery to date.

“Ceres cryovolcanic activity and the composition of its cryomagma adds to the geological diversity of the Solar System,” the researchers write in their study.

Using Dawn’s Framing Camera imagery, a team of NASA scientists led by Ottaviano Ruesch, a postdoctoral fellow at the Goddard Space Flight Center, analyzed a protrusion at the surface of the dwarf planet. Initially thought to be a mountain named Ahuna Mons, they noticed it looked quite different from others nearby.

Ruling out any mountain-building tectonic features, the team concluded that it must have been extruded to the surface, very similar to how certain volcanic domes form on Earth. In fact, the crater within Mount St. Helens features a steadily growing dome of thick, viscous magmatic material, which is essentially magma slowly being forced up to the surface.

Ruesch’s team are convinced that this is the same mechanism operating on Ceres, with the “magma” here being comprised of a viscous mixture of water, ice and chloride salt.

On Earth, magma ascends through the crust of its own accord, cracking the rock around it as it does so. On Ceres, the cryomagmatic system operates a little differently. “Pathways for rising material were possibly provided by fractures produced by nearby impacts,” the authors suggest.

Importantly, for material to become buoyant and rise upwards through a planetary body, it requires a temperature difference between the core and the surface.

The volcanism-generating heat on Earth is provided by primordial heat left over from its fiery formation, as well as radioactive heat generated continuously by decaying, unstable elements. Some bodies, like the hellish, volcanic Jovian moon of Io, is heated by tidal forcing – the gravitational interaction between it, its host planet, and other moons that generates frictional heat within its core.

With no tidal forcing mechanism available for Ceres, it must have an internal heat source like Earth, but the team is reluctant to say via what that may consist of. They do note, however, that the high salt concentration within Ceres will lower the temperature water ice melts at, which will encourage the formation of a water-based magma body beneath the surface. 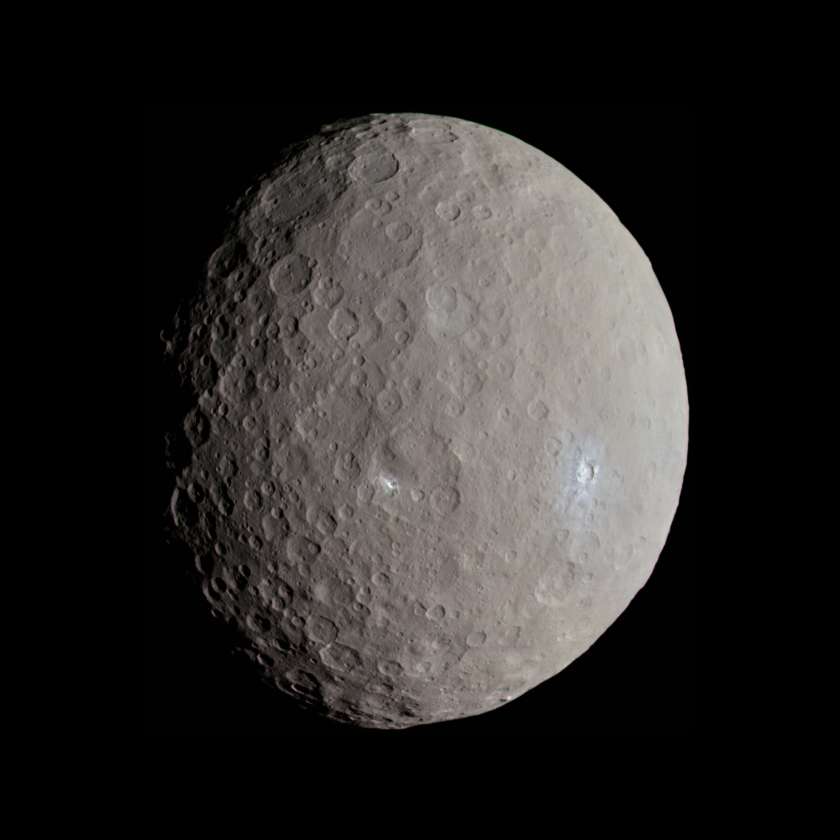 A second Science study adds credence to this cryovolcanic theory, revealing that liquid water exposed by a young impact crater has been detected at the surface. “This observation is the first and only direct detection of the H2O molecule at the surface of Ceres,” lead author Jean-Philippe Combe, a remote sensing expert at the Bear Fight Institute, told IFLScience.

Using a spectrometer, its unique composition within the 1 million to 10 million-year-old Oxo crater was confirmed by the Dawn spacecraft. This strongly suggests that Ceres has a mantle of water and ice, partly molten and partly solid – just like our own, but made of very different materials. So is it, and any associated cryovolcanism, still active today?

“There could be movements of water-rich materials in the subsurface of Oxo, which is a common point with Ahuna Mons when it was active,” Combe adds. Indeed, “water has played a major role in the evolution of Ceres in the past, by most of the surface activity related to water has [today] ceased, but not all.”

Ruesch's team are not convinced Ahuna Mons is still rumbling away. “Today, it is most probably not active,” Ruesch told IFLScience. “But nature often surprises us.”

The hunt is now on for signs of present-day icy eruptions.

Image in text: Ceres, with the Oxo crater represented by the bright speck in the center. NASA/JPL-Caltech/UCKA/MPS/DLR/IDA

A false-color map of Ceres' surface. Are there any other cryovolcanoes we haven't spotted yet? NASA/JPL-Caltech/UCKA/MPS/DLR/IDA