Ladies and gentlemen, a round of applause for Costa Rica – this Central American nation has been running on 100 percent renewable electricity for at least 76 consecutive days. This follows on from 150 other days already this year wherein it has only used geothermal and hydrothermal power generation. Last year, a whopping 300 days were fossil fuel-free in terms of electricity generation.

No matter which way you cut it, this is a wonderful achievement, particularly in light of increasing evidence that climate change is exacerbating everything awful, from natural disasters to human conflict. Ever since the nation expunged its military dictatorship in 1949, Costa Rica has made it a primary objective to focus on environmentally sustainable development. To this end, it hopes to become carbon-neutral by 2021.

Normally, about 7 percent of its electricity is generated by fossil fuels. Fortunately, particularly heavy rains recently have supercharged the nation’s four huge hydroelectric dams recently, rendering fossil fuel combustion unnecessary. (Weirdly, the surge in rainfall may be attributable to climate change itself.)

However, as always in the case of stories like this, there are some important caveats that need to be taken into account. As a relatively small country fortunate enough to have sizeable river networks across undulating topography, as well as geothermal sources beneath its feet, Costa Rica is able to harness hydroelectric and geothermal power like few others.

Its small population of 4.87 million also means that the amount of energy required to provide power to all is smaller than many other nations. Its GDP (about $10,200 per person) is also relatively low, and poorer nations tend to require and use less energy than wealthier, more developed ones.

Iceland – a far wealthier (GDP $47,500 per person) but far less populous (323,000) country, is comparable in terms of how it produces energy. Like Costa Rica, it has almost no need for other power sources, including wind, nuclear, biomass or fossil fuels.

Other more populous countries hoping to lower their carbon footprint aren’t so lucky. In order to do this, but to make sure their energy needs are met, they require a mixture of renewables and nuclear power. 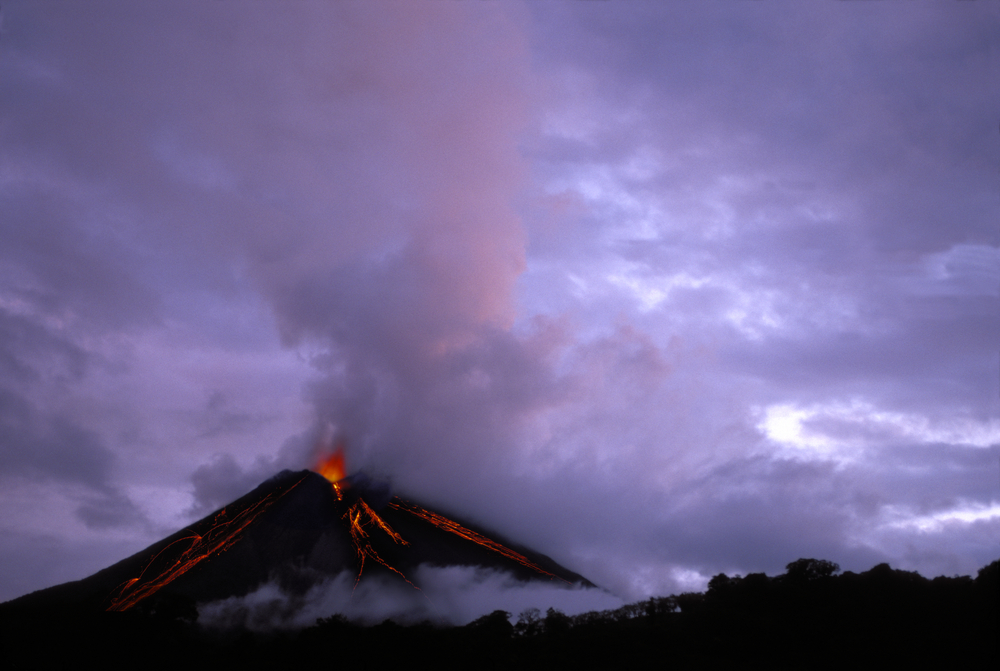 Arenal volcano, powered by the same fire that generates some of the country's geothermal plants. NancyS/Shutterstock

There’s also the fact that Costa Rica, like Iceland, isn’t a 100 percent fossil fuel free nation. Its electricity supply more or less is, but its energy supply isn't. This covers other forms of power production, such as that used by transportation. As reported by Vox, the nation still has one million cars running on “outdated” hydrocarbons, and as a result, imported oil supplies over half the nation’s energy demands.

If anything, this illustrates just how much of a barrier transportation is to the clean energy revolution. Although many nations around the world are switching their electricity grids to become more environmentally sustainable, fueling transportation and construction will remain giant elephants in the room for some time.

Overall, then, Costa Rica’s low-carbon achievements seem small. However, they set a good example of where a nation’s priorities should be, and as data demonstrates, the world is trying to follow along.

In 1960, 2.7 percent of the world was powered by nuclear or renewable energy. In 2013, that was up to 8.6 percent. Fossil fuel energy consumption has dropped from 94 to 81 percent in the same time. Make no mistake, we are heading in the right direction. The question, of course, is – are we doing it fast enough to change the future?

Comparing Costa Rica to some other notable countries with varying carbon footprints, measured in megatonnes of carbon dioxide, circa 2014. Global Carbon Atlas