Cats are smart, furry psychopaths – this much is clear. These tiny neurotic lions seek dominance in every single situation that they’re presented with; although some are frightened of cucumbers, most see us as either rubbish kittens or pathetic landlords. They have even evolved to recognize their owner’s voice, but they frequently choose to ignore it.

Writing in the journal Animal Cognition, a team of scientists from Kyoto University suggest that perhaps we have not yet even begun to fully comprehend the scope of the oft-malevolent intellect of these ferocious felines. Based on how cats seem to understand that rattling boxes have hidden objects inside them, the researchers have come to the rather fanciful conclusion that they are acutely aware of some of the laws of physics.

Clearly, though, they don’t mean that cats can tell the difference between Newton’s and Einstein’s theories of gravitational attraction, and it’s highly doubtful that they even care about the monumental discovery of gravitational waves. 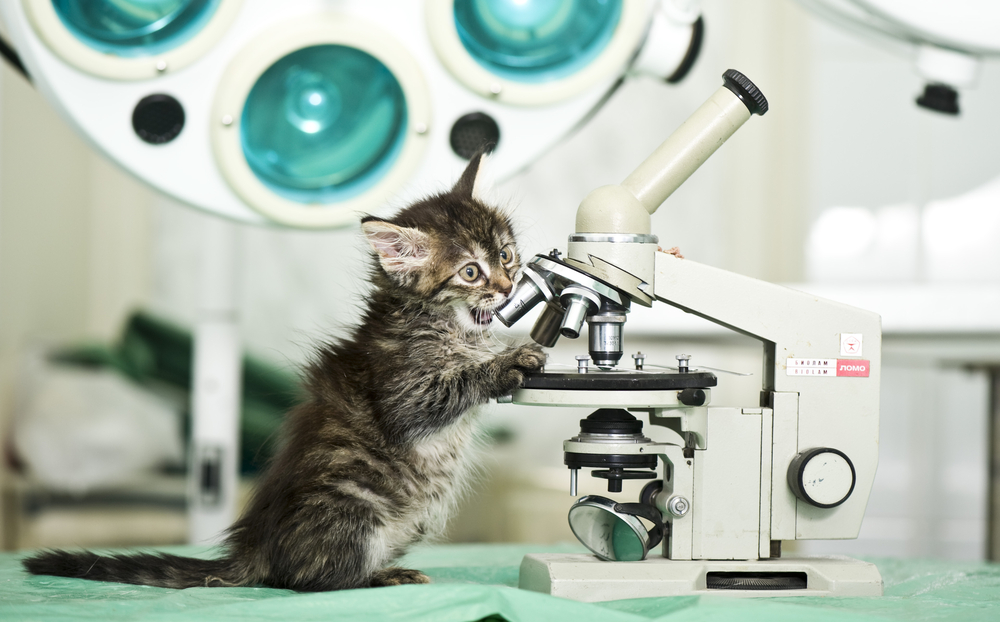 This kitten probably has no idea whatsoever how to use a microscope. Kachalkina Veronika/Shutterstock

“This study may be viewed as evidence for cats having a rudimentary understanding of gravity,” the authors write, completely nonchalantly. Rather beautifully, they point out the novel nature of their work, saying that “We have found no [previous] study specifically testing knowledge of this fundamental physical rule in cats.”

Observing 30 domestic cats, an experimenter stood in front of them and began shaking a box. The box either contained an object or it didn’t. It was then inverted, and the cat watched – probably with a sense of world-weariness – as an object fell out onto the floor, or as nothing at all happened. The box was shaken before the inversion occurred, and if it had an object inside, it rattled; if it didn’t, it didn’t.

This, ladies and gentlemen, is where the plot thickens. In order to try and trick half of these cats, sometimes the box was empty but the researchers played a rattling sound from within the box anyway. In some instances, the box was jiggled around with an object inside, but they made sure no rattling noise occurred, before turning over the box and letting the object tumble out.

Firstly, the cats were seen to stare for longer periods of time at the boxes that made rattling noises, from which the researchers inferred that the cat was pondering on the existence of a hidden object within the box. They inherently understood that the rattling was the “effect,” one that was “caused” by the object moving around.

Whenever a rattling noise wasn’t followed by an object, or whenever an object was followed by no rattling noise, the cats spent ages glaring at the box, presumably wondering what sort of bizarre witchcraft was happening before their beady eyes. The research team interpret this prolonged stare as them mentally processing how their understanding of cause and effect was not apparently applicable.

Or, perhaps, the cats were just wondering what on Earth these people were actually doing. It’s quite a big leap to conclude, based on how they stare at the unusual sight of a person dancing with a container, that cats actually understand basic physics.

There’s no question that they’re intelligent: Like many other non-primate animals, such as ravens, they can infer the presence of objects or even intent based on audio and visual cues. But it’s probably going to be a long time before your cat pipes up about the Higgs boson.

Gif in text: Just because a cat knows that falling happens when there's nothing beneath it, it doesn't mean that it comprehends gravity. Funny Animals via YouTube