It may not look like much, but this creature could be one of the earliest mollusks ever discovered. A diverse group of animals, mollusks include not only snails and clams, but also some of the cleverest critters both above and below the shoreline: squids and octopuses.

The bizarre fossil, which looks a little like a hairy finger with a nail, dates to around 480 million years old. It has been identified as belonging to mollusks due to the presence of a toothed tongue – known as a radula – that is distinctive of this group of invertebrates. Fossils of the creature have been dug up for decades, but as they are often incomplete, it wasn’t until two whole specimens turned up in rocks from Morocco that researchers realized what they were dealing with.

The two fossils, which belong to a juvenile and an adult, were so beautifully preserved that the researchers were able to see in fine detail the spines that covered its back, the radula with over 125 rows of teeth, and the curious single shell that covered its head. Mullusks today are well known for their hard shells, and this fingernail-like structure is thought to have been the precursor, with later animals evolving more plates of shell further down the line. 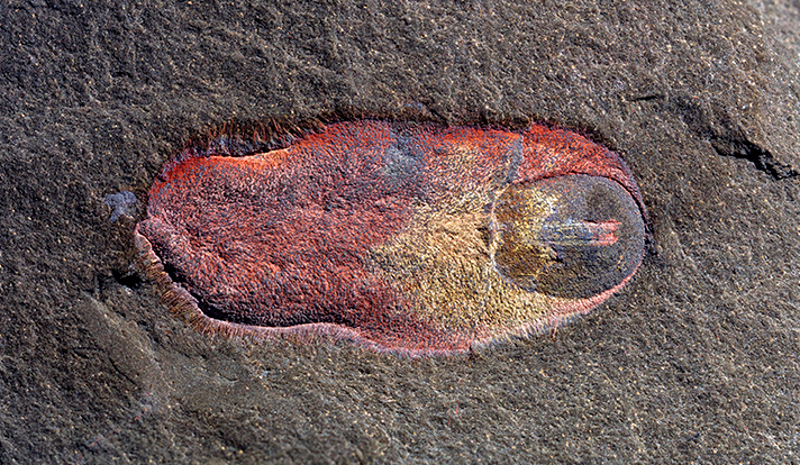 The fossil looks weirdly like a severed finger or toe. Peter Van Roy

“The molluscs are amongst the earliest animals identifiable in the fossil record, however determining what their ancestor looked like is difficult since many of the groups appear within a small window of time, making the sequence of evolutionary events difficult to piece together,” explains Dr Jakob Vinther, who led the study published in Nature.

It is thought that the group first evolved around 530 million years ago, and although this creature, scientifically named Calvapilosa kroegeri, appeared much later, the researchers think that it gives them a pretty good idea of how those early mullusks probably looked.

Not only that, this latest research may have also solved another palaeontological mystery. Fossils of a separate animal, called Halkieria, have been vexing scientists for a while, as they are unable to place it in the evolutionary tree. Looking like a slug, but with two armored plates on its back, it's now thought that it may also be a mollusc that came after C. kroegeri, after it evolved a second bit of shell.