Ten blind patients in the UK will undergo a major new treatment that will hopefully let them see again. The new procedure has already been successfully tried out on patients with the genetic blindness retinitis pigmentosa, which causes the progressive loss of sight, but will now be offered on the National Health Service (NHS) to a handful of people at the beginning of next year.

The “bionic eye” works through a combination of external technology working in sync with internal implants. A pair of glasses integrated with a camera captures what is going on, and then sends the video to a small computer worn on the hip. This then turns the video into the necessary data, which is then wirelessly sent to an implant in the eye.

This implant has to be surgically placed on the retina of the patient, bypassing the damaged photoreceptors, as well as an electronics case and antenna, which is attached to the outside of the eye. The computer sends the implant the data to the implant, which then stimulates the retina's remaining cells through pulses of electricity, creating the perception of patterns of light, which the patient can then learn to interpret as visual patterns. 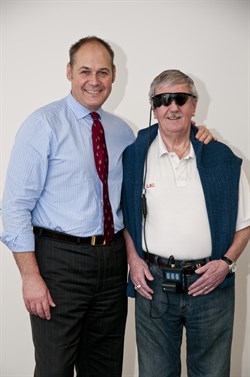 While patients with the implant cannot see full pictures, it does allow them to differentiate between objects that are dark and light. This enables them to read large letters, identify doorways, or tell if they have been approached by someone, or if a person has moved away. It may sound simple and of not much use to people who see, but for patients who have previously been blind, it is an incredible step forward.

“Having spent half my life in darkness, I can now tell when my grandchildren run towards me and make out lights twinkling on Christmas trees,” said Keith Hayman, who had been blind for more than 20 years before he had the bionic eye fitted. “I would be talking to a friend, who might have walked off and I couldn't tell and kept talking to myself, this doesn't happen anymore, because I can tell when they have gone.”

“These little things make all the difference to me,” he added.

Now, 10 people in the UK will get the chance to have the implant fitted from the beginning of next year, with the treatment being provided on the NHS meaning that they will not have to pay a thing. They will then be followed up over the following years, and if the results are good and it significantly improves their lives, then the bionic eye may be offered to more people in the future.

Image in text: Keith Hayman (right) wearing the glasses that allow him to see again, with the surgeon who carried out the procedure, Professor Paulo Stanga (left). Manchester Hospital