Mars is the next big frontier of human space exploration, but it’s hardly a hospitable world. While there have been many proposals for making the Red Planet a bit more cozy, NASA scientists have now suggested that one way to do it would be to give Mars a magnetic field.

This might seems like the pitch for a sci-fi movie, but the idea is based on solid science. A magnetic field would protect astronauts from cosmic rays and allow Mars to have a thick and mild atmosphere. Achieving this feat is actually relatively simple. We would put a magnetic generator at a precise point between Mars and the Sun.

The point in question is called L1 and it is a special position. Something placed there would always be located exactly between the Sun and Mars, and since the solar wind is responsible for depleting Mars’ atmosphere, that’s the only protection needed to enrich the planet again.

“The magnetic field will be increased until the resulting magnetotail of the artificial magnetosphere encompasses the entire planet,” the abstract of the research said. “This situation then eliminates many of the solar wind erosion processes that occur with the planet’s ionosphere and upper atmosphere, allowing the Martian atmosphere to grow in pressure and temperature over time.” 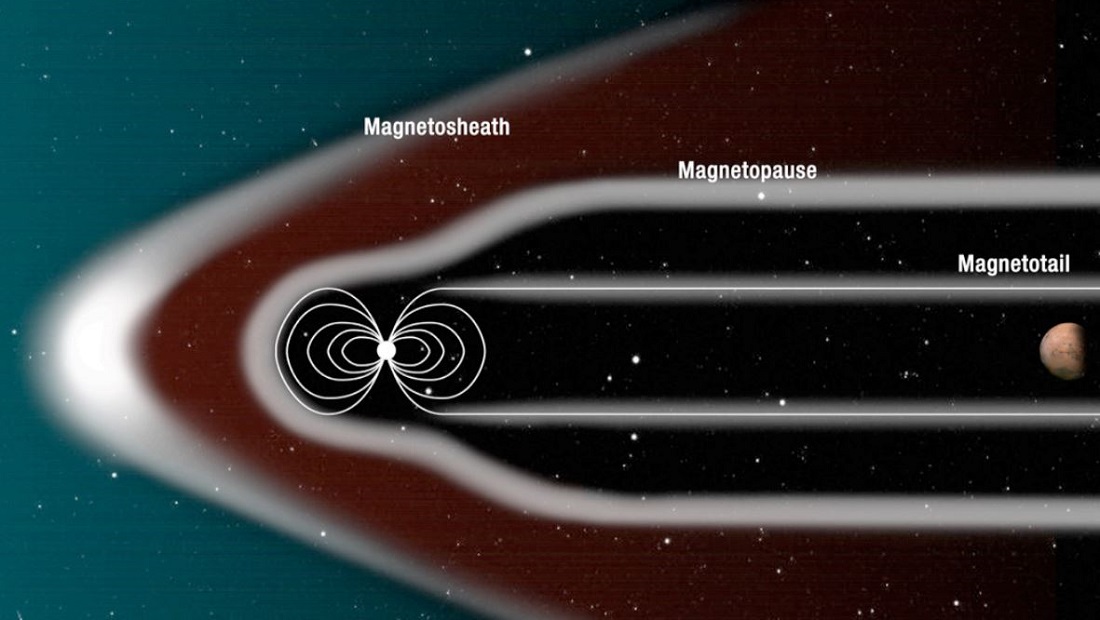 How the artificial magnetic shield would work. NASA/Green et al.

The research was presented at the Planetary Science Vision 2050 Workshop by Dr Jim Green, NASA's Planetary Science Division Director. The idea behind this “fanciful” technology is actually being studied to protect astronauts and spacecraft. The scientists simply imagined a more powerful shield and then ran simulations of the potential consequences.

According to the model, this shield would, over time, increase the atmospheric pressure, which would lead to an increase in temperature. Just a 4°C (7.2°F) increase will melt the ice in polar regions, liberating CO2 and creating a powerful greenhouse effect, enough for water to once again abundantly flow on Mars.

The team will run more simulations to establish how long it will take for an artificial magnetic field to deliver this terraforming approach.

While the strategy is absolutely intriguing, it doesn’t mean it could or should be done. Mars might be home to some basic life forms and although this might thwart our planetary expansion, we should take them into consideration.