Mice like it warm, scientists from the Roswell Park Cancer Institute point out. Yet most labs keep them at a temperature more comfortable for human researchers. The difference can affect the way rodents respond to diseases and medication, and make them less reliable models for human conditions. Changing the lab temperature could mean big things for medical research.

"Most people only look at results from experiments at standard lab temperatures," said Dr. Bonnie Hylander in a statement. "They're not necessarily aware that if you repeat the experiments with mice at a different temperature, you might get a different outcome."

Most labs keep mice between 20 and 26°C (68 and 79°F), in line with National Research Council guidelines. From a human perspective, this makes sense. Researchers and technicians wear coats and gloves in the lab, and become uncomfortable at higher temperatures. However, mice lose so much heat through their large surface area, relative to volume, that they prefer 30 to 32°C (86 to 89°F), spending more time in warm locations if offered the chance.

In Trends in Cancer, Hylander points out that the need to make up the extra heat changes the mouse metabolism, which in turn causes them to eat more food and store less energy for later activity. “The 'mild' cold stress caused by standard sub-thermoneutral housing temperatures used for laboratory mice in research institutes is sufficient to significantly bias conclusions drawn from murine models of several human diseases,” the paper argues. 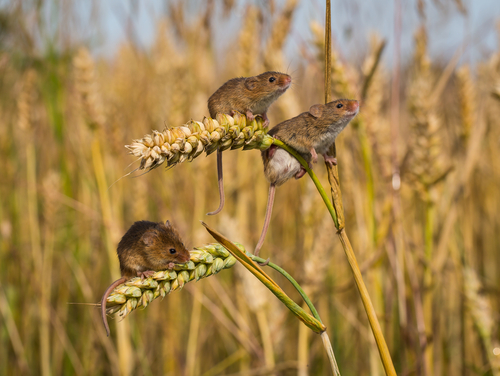 There is a reason these mice like to sunbake while they feed. Paul Tymon/Shutterstock

In 2013, Hylander co-authored a paper showing that mice have a better chance of fighting off cancer when they are kept at their preferred temperature, with tumors growing more slowly and being less likely to metastasize.

Since then she has been exploring whether this temperature difference changes treatment effectiveness. "While animal physiologists have recognized the potential of this problem for some time, we were surprised that essentially no work was done on cancer models,” said Dr. Elizabeth Repasky, who is collaborating with Hylander, in a statement. “We thought it was very important to highlight how many other areas of biomedical research, some related to cancer, are influenced by standard housing temperatures."

So what is the solution? Can mice and researchers find a mutually satisfactory temperature? Or do we need to keep our mice wearing adorable little sweaters?

"We're not saying one housing temperature is better than another," Repasky argued. "The different temperatures are simply resulting in differences in experimental outcomes, which could be important. I think a lot more research is needed to optimize the use of mice for testing therapies that will be useful in people."

What Repasky and Hylander do suggest is that researchers monitor the temperatures at which mice are kept, and report this in papers. Additional nesting material could also help keep mice warm. They also note care should be taken to ensure common conditions for mice in a study - if test mice are kept higher, where it is warmer, than the controls, differences in temperature might be more influential than the medication being tested.