In late 2016, more than two dozen US diplomats and their family members based in Havana, Cuba reported concussion-like symptoms resembling traumatic brain injuries after hearing a loud, high-frequency sound, yet none of them had received notable trauma to the head.

Dizziness, ear pain, tinnitus, and a sensation of pressure moving through their head and abdomen were among the symptoms simply explained by Cuban authorities as hearing the sounds of crickets chirping and the ramifications of stress. However, previous studies found brain abnormalities in changes to their white matter tracts, the part of the brain responsible for transmitting bioelectrochemical information throughout the brain and central nervous system. For the first time, a team of researchers has now conducted comprehensive history and physical examinations to describe these neurosensory symptoms in an effort to understand what happened and to prevent it from happening again.

The retrospective review analyzed clinical data from all 25 people who reported the mysterious noise and symptoms, as well as 10 of their housemates who did not experience such sensations, including a standard set of health history questions, tests for visual and auditory reaction times, as well as physical, neurological, and eye examinations between four and 60 days after “exposure”. Additionally, all patients were treated for balance, cognitive, and emotional symptoms. 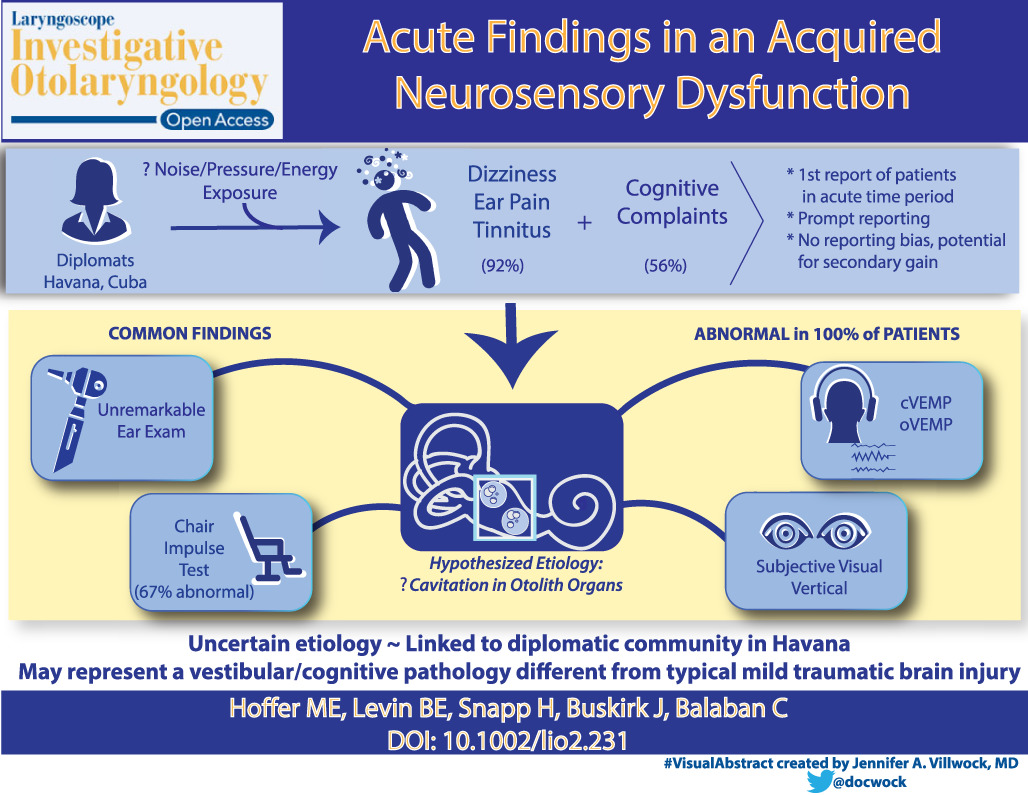 “This report is incredibly important because it represents the findings from patient evaluations that were conducted shortly after exposure, and an analysis of the data confirming that they had a unique set of symptoms that we have not seen before," said study author Carey Balaban in a statement.

Every person who reported symptoms was found to have an inner ear abnormality and show evidence of cognitive dysfunction.

"Objective testing showed evidence of a balance dysfunction that affects the inner ear and a unique pattern of cognitive dysfunction," said lead author Michael E. Hoffer. "This cluster of auditory, vestibular, and neurological symptoms, along with associated psychological issues, does not resemble more classic traumatic brain injury (TBI), based on our team's vast experience in this area."

The study did not determine the cause of the symptoms, but rather conducted an evaluation of them. To help explain what caused them, the researchers noted that ultrasonic exposure can produce “a syndrome involving manifestations of a headache, tinnitus, pain, dizziness, and fatigue,” continuing that the “exposure responsible for these findings is unknown.”

“It would be imprudent to exclude any potential directed or non-directed energy sources at this time,” they added. The study is published in the journal Laryngoscope Investigative Otolaryngology.

Other Americans experienced similar symptoms after having visited Cuba in the months following the "attacks", with explanations ranging from sonic weapons to brain-changing psychosomatic conditions associated with mass hysteria.