A backyard telescope has helped discover that a star locked in orbit with a pulsar has enormous star spots, indicative of a powerful magnetic field. The discovery could help explain features of pulsar behavior that have mystified professionals.

André van Staden is an amateur astronomer living in Overberg, South Africa. Using a 30-centimeter-diameter (12-inch) telescope – large for an amateur, but tiny by the standards of professional devices – van Staden took images over a 15-month period of MSP J1723-2837, a binary system containing a pulsar and main sequence companion. His findings were interpreted by Dr John Antoniadis of the University of Toronto, and could reshape the way we think about binary systems where one component is a pulsar.

Pulsars are highly magnetized neutron stars, and their extreme density creates intense gravitational fields. When a companion star is close by, as is the case for MSP J1723-2837, the field distorts the companion into a teardrop shape. From Earth, the companion looks brightest when we see it most spread out – that is when we are seeing the long side of the teardrop – dimmest when we are looking at the front or tail. Consequently, even telescopes far too small to make out the shape can track the companion's orbit by observing changes in brightness.

Antoniadis and van Staden noticed that MSP J1723-2837 was different, with brightness varying on a longer cycle than its 15-hour orbital period. The timing of the peaks also contradicts the theory that stellar wind from the pulsar produces a “hotspot” on the side of the companion that is facing it.

The discovery was reported in The Astrophysical Journal, where Antoniadis and van Staden attribute changes to magnetic activity on the companion star, a much larger version of the sunspots we see on our own Sun. Since MSP J1723-2837 is not tidally locked to the pulsar it orbits – it doesn't always keep the same side facing its companion as the Moon does to Earth – its brightness is affected by the direction in which the star spots are facing.

This is the first time astronomers have detected magnetic activity on a pulsar companion with such confidence. Nevertheless, several other stars in similar circumstances show behavior that may be interpreted in the same way, leading the authors to suggest in their research that “this may be a common property” of these types of systems.

Astronomers are particularly keen to track the behavior of pairs like MSP J1723-2837 because they might shed light on why the process whereby pulsars draw material from their companion stars sometimes stops and restarts.

The work is a reminder that astronomy remains one of the areas of science where amateurs can make a major contribution. Van Staden noted in a statement that time on professional telescopes is frequently too scarce to make the regular observations needed to plot a light curve for an interesting object like MSP J1723-2837, and amateurs can fill the gap.

This is particularly the case for those in the southern hemisphere, since the smaller number of professional telescopes in the south means parts of the sky that can't be seen from northern hemisphere observatories are often neglected. MSP J1723-2837's location in Sagittarius means it is visible in the northern hemisphere for a relatively short period each year, but much longer from van Staden's home in the Western Cape. MSP J1723-2837 is 2,500 light-years away and the companion has an average 15.5 magnitude brightness, indicating just how faint objects can be and still be suitable for amateur study. 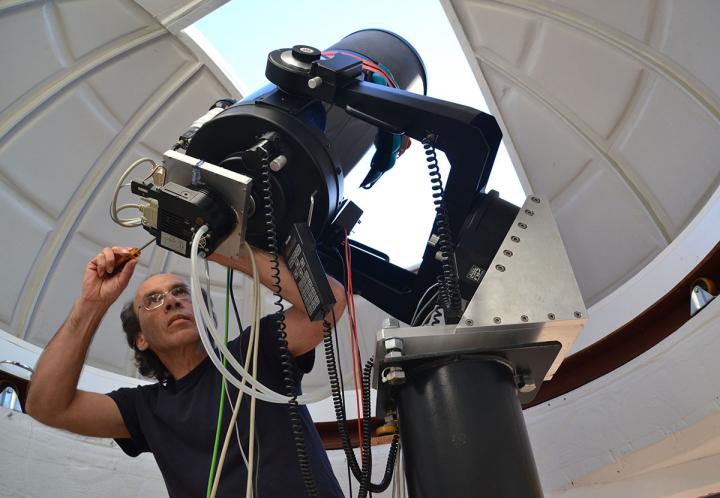