One of the most important discoveries made by Hubble has just got a completely new look. Two international teams of astronomers have used the Atacama Large Millimeter/submillimeter Array (ALMA) to take a deeper look at one of the furthest regions we’ve ever discovered, the Hubble Ultra Deep Field (HUDF).

The Ultra Deep Field was first observed in 2004 and features some of the most distant galaxies ever detected. It has since been repeatedly observed by telescopes including Hubble many times, and is the deepest view of the universe to date.

ALMA complements the Hubble data by providing information about the distribution of gas and dust around these very young galaxies. To do this ALMA, has conducted an extensive observation of the HUDF – 50 hours of telescope time – which is more time than ALMA has spent on any other single region.

There are several results from this latest observation, and they are published in a series of eight papers that will appear in the Astrophysical Journal and Monthly Notices of the Royal Astronomical Society.

The astronomers found confirmation that, in the early universe, the best way to predict if a galaxy is forming a lot of stars is to look at its mass. The warm gas detected by ALMA is a good proxy for star-formation activity, and the teams saw almost many of the very massive galaxies already seen by Hubble. There’s a clear link between the two.

“This is a breakthrough result. For the first time we are properly connecting the visible and ultraviolet light view of the distant universe from Hubble and far-infrared/millimetre views of the universe from ALMA,” said Jim Dunlop, from the University of Edinburgh and lead author of one of the papers, in a statement. 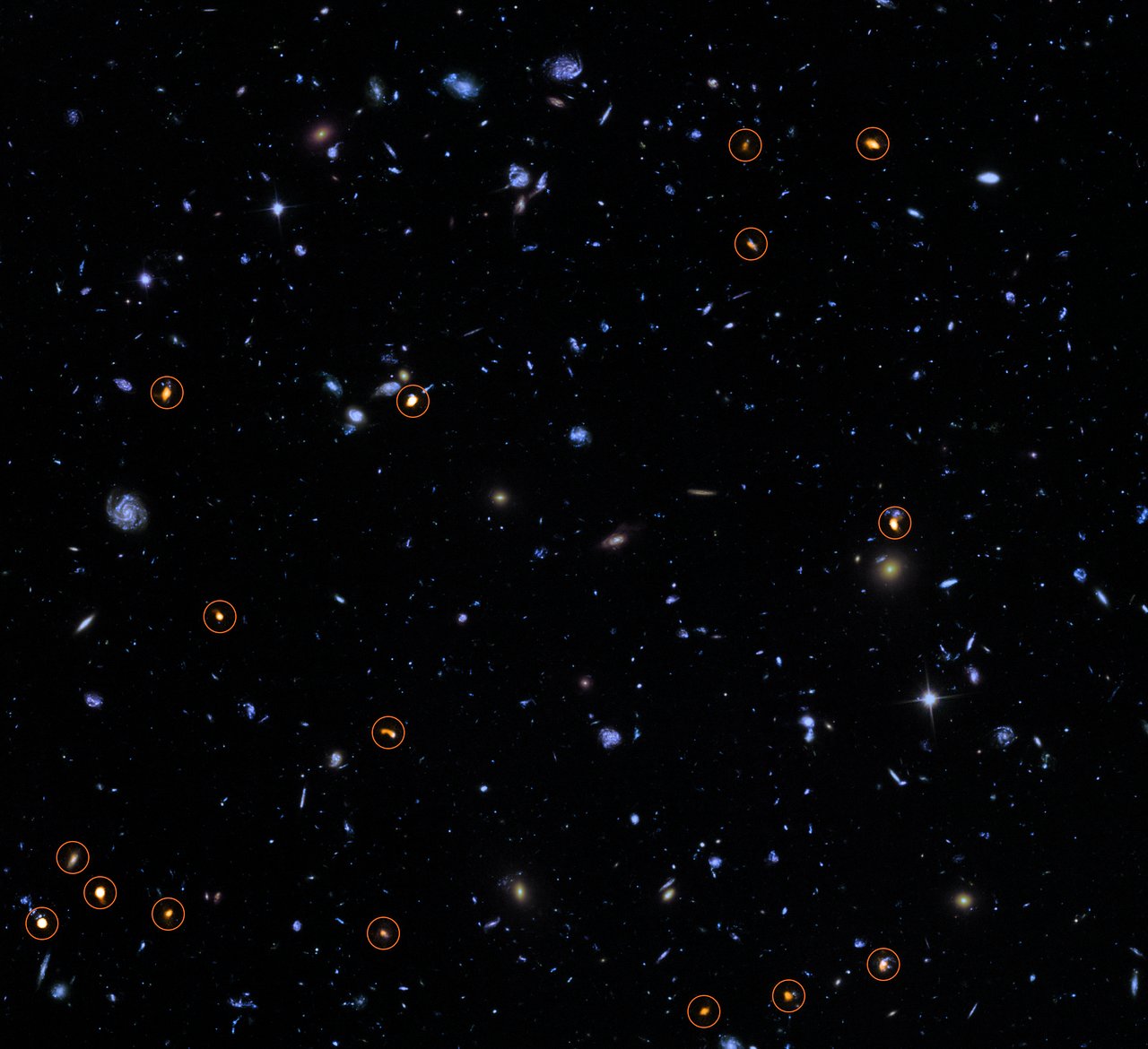 The Hubble Ultra Deep Field with the ALMA detection of the most massive galaxies circled. ALMA (ESO/NAOJ/NRAO)/NASA/ESA/J. Dunlop et al. and S. Beckwith and the HUDF Team.

A second team worked on a smaller area of the Ultra Deep Field but looked much deeper into the universe. Thanks to this approach they discovered a population of galaxies that hadn’t been seen before, and the observations helped them create a 3D map of the distribution of gas in the distant cosmos.

“The new ALMA results imply a rapidly rising gas content in galaxies as we look back further in time,” said team co-leader Manuel Aravena from the Diego Portales University in Chile in the statement.

“This increasing gas content is likely the root cause for the remarkable increase in star formation rates during the peak epoch of galaxy formation, some 10 billion years ago.”

These results are just the beginning of more planned observations in the region. A new observing campaign of the Ultra Deep Field lasting 150 hours is already being planned, which will allow an even deeper look into the dawn of the cosmos.