The possibility of a ninth planet has aroused plenty of excitement lately among astronomers. Evidence for this planet comes from its herding of more modest-sized worlds beyond Neptune, suggesting a large gravitational force is at play. However, attempts to explain how such a large object could be orbiting at these distances suggest it had to buck the odds to get there.

Until we have visual confirmation, we won't know for sure that Planet Nine exists, but as evidence starts to build, the race is on to see if we can spot it. This in turn has led to another race to explain the planet's history.

Dr. Gongjie Li of the Harvard-Smithsonian Center for Astrophysics has had a paper accepted by Astrophysical Journal Letters (preprint on arXiv) discussing some of the possibilities for how it formed. But she found that none could feasibly explain how it got to be in a wide and eccentric orbit.

“Evidence for the new planet is provided by the orbital alignment of Kuiper Belt objects, and other Solar System properties, which suggest a Neptune-mass object on an eccentric orbit with semi-major axis 400 − 1,500 AU [Astronomical Units, 1 AI is the distance from the Earth to the Sun],” Li and her co-author Fred Adams write. “With such a wide orbit, Planet Nine... is susceptible to disruption by passing stars.” 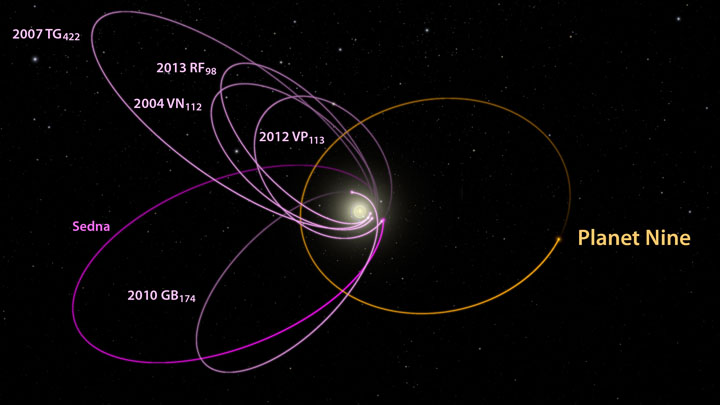 Evidence for Planet Nine rests on the way the orbits of Kuiper Belt objects come together as if something was herding them. Caltech/Robert Hurt.

Today, the nearest stars are so far away they would not disturb Planet Nine. Things would be different, however, if the Sun was part of a cluster, like the one in which it is believed to have formed. Within clusters, stars are so near each other that it would be very likely that a close encounter would disrupt Planet Nine, hurling it out of its orbit.

Stars begin their lives in clusters, which tend to be 1,000 times as densely packed as the Sun's current neighborhood. Eventually, they break free, but how long this takes varies. If the Sun spent more than 100 million years within its birth cluster, Li and Adams think Planet Nine would have been unlikely to last the distance.

If the Sun spent less than 100 million years in such an environment, Li and Adams think Planet Nine would have had a reasonable prospect of maintaining its current orbit, but are still puzzled by how it got there in the first place.

An interaction with a nearby star (either before leaving the cluster or a chance encounter thereafter) could have pulled Planet Nine into its current theorized orbit, but only if it started out in a location that fit poorly with our current models of the Solar System.

Alternatively, Planet Nine could once have dwelt closer in and been thrown out by Jupiter or Saturn. However, the paper reports, “the window for scattering a planet into an orbit with a ∼1000 AU [1 AU is the Earth-Sun distance] is narrow.” More often, planets get thrown out of the Solar System entirely.

Another theory is that Planet Nine formed outside the Solar System before being captured by the Sun's gravity, but Li and Adams conclude that the chance of this occurring is less than 1 percent. Not Leicester City level of unbelievability, but unlikely nevertheless.

Not everyone thinks Planet Nine is such a candidate for the finite improbability drive, however. Dr. Scott Kenyon, also of the Harvard-Smithsonian, has submitted two papers to the Astrophysical Journal with models for how a series of repeated encounters between Planet Nine and a larger planet could have placed it in its current orbit. Kenyon's work has yet to pass peer review, but preprints of both are also available on arXiv.

Kenyon argues his theories can be observationally tested. If either is confirmed, it will provide unparalleled information about the Solar System's early development.