The internet is a testament to how much we love animals. When people aren’t busy looking up cute cat videos, they are sharing random facts about their favorite animal. There is just one problem, though – a lot of these “facts” are plain wrong.

Ok, so this one has been busted a million times already, but it is also one of the most common facts on the internet, so it is worth repeating. A duck’s quack does echo. It’s as simple as that. Just the notion that this particular sound -- out of all the noises in the world -- would not be capable of producing an echo under any circumstances is ludicrous. Moreover, a duck’s echo isn’t a universal thing. There are different species of ducks out there and they make different noises (and they all echo). The echo is a little faint and ducks usually hang around open spaces so their echo is not something you would typically hear in nature but, still, it’s just a sound like any other. There is nothing special about it. If you have access to a duck, feel free to test it out by yourself. Take the duck into a bathroom and get it quacking.

2. Bees die after they sting you Bees sting you once, wasps can sting you over and over again. That’s the rule right? Not really. There are around 20,000 species of bee in the world, and only honey bees sting once. This is because their stinger has barbs on it and it gets lodged in the target’s skin. When the bee flies away it leaves the stinger and venom sack behind, basically ripping itself apart and dying within minutes. However, any other species of bee or wasp that has a smooth stinger can sting you as many times as it wants. Even the honey bee doesn’t always die after a sting. If its target doesn’t have thick skin (typically another insect) it is generally strong enough to pull out its stinger and repeat the process. At the same time, certain species of wasps can die after stinging because they also have barbs on their stingers, albeit smaller.

We already talked about this one here so we won’t go into detail. Basically, the idea that lemmings commit suicide by hurling themselves off cliffs is false. This was first presented in a documentary by Disney and the filmmakers fabricated everything by getting a bunch of lemmings at the side of a cliff and then pushing them off.

4. We swallow X number of spiders in our sleep every year 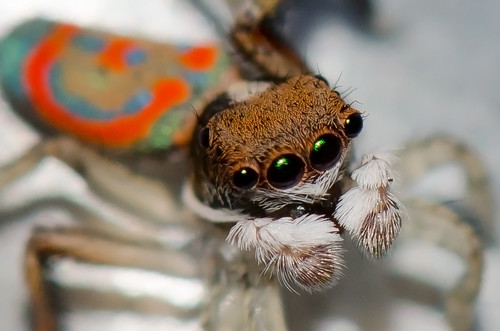 I use X because, although the “fact” crops up everywhere and everyone knows it, it’s always a different number - which usually suggest that it’s complete nonsense. Arachnophobes everywhere can sleep easy. We're not saying that it is completely impossible for someone to swallow a spider while they sleep, it is definitely not a common occurrence that happens multiple times each year. Besides the fact that there is no study or scientific research to support such a claim, it is likely that this “fact” was created in the early days of the World Wide Web specifically to show how gullible people are and that they will believe anything they read on the internet. If you are not convinced, try to look at it from the spider’s perspective. We are not food. We are a giant predator who can kill it instantly. Why would it go in our mouths? Would you go poking around inside the mouth of a great white shark? Unless you have a tasty fly buzzing around in there, your mouth has nothing to offer to a spider.

5. Ostriches stick their heads in the sand

Just because you saw it in cartoons does not make it true. Again, try to look at this from the bird’s perspective. Let’s say you are an ostrich. You are the biggest bird in the world. You can weigh up to 320 lb (145 kg) but you can still run at 40 mph (70 km/h). You can grow to be over 9 ft (3 m) tall and have sharp claws at the end of your feet. You are basically the descendent of the raptor and you can’t find any better way to defend yourself other than sticking your head in the sand and hoping that the problem goes away? Sorry, that doesn’t happen. When in danger, ostriches will either run away or fight. Both are perfectly viable options for the bird. If it does fight, don’t expect a pushover. Ostriches have been known to take down lions with a well-placed kick.

Ok, technically, this isn’t an incorrect animal fact, but people get them mixed up all the time so this seems like the perfect opportunity to make a few clarifications. The basic idea is that tortoises are land animals while turtles are water animals that only return to land to lay eggs. You can typically tell the difference between them by looking at their feet: tortoises have round, stumpy feet with claws in order to walk around while turtles have webbed feet in order to swim better. However, it should also be mentioned that this differentiation is not universal. Some parts of the world (including North America) simply use the word turtle to refer to all species. If you really want to be a smartass, you can call them chelonians since that is the term that correctly refers to all species of turtles and tortoises. While we are talking about incorrectly named animals, these tiny adorable marsupials from Australia are simply called koalas, not koala bears. They might look like a teddy bear, but they are not related. Koalas are marsupials, and are only distantly related to bears - we're more closely related to bears than they are!

8. Don’t touch a baby bird because its mother will abandon it

If you ever found a tiny baby bird that has fallen out of its nest, don’t let this “fact” confuse you whether you should help or not. Birds don’t use scent to recognize their young and, even if they did, they don’t find humans so repulsive that the mere idea that you touched its young would cause it to completely abandon it. If you come across a young bird that needs help, it’s advised that you locate the nest and put it back as fast as possible. However, it is important to be able to tell if the bird actually needs help in the first place. Young birds are typically categorized in two: nestlings and fledglings. Nestlings are really small, weak, barely covered in feathers and are not strong enough to fly or to grip stuff. They are vulnerable and need your help if they have fallen out of their nest. A fledgling, on the other hand, is basically a teenager. It has grown to the point where it is starting to explore the outside world on its own so chances are that it left the nest by choice and it doesn’t need your help.

Ok, this was an idea long before the internet came along and people started passing along random facts. In fact, even in bull fighting they use red colored flag to make the bull angry and to get it to charge. However, bulls don’t attack the color red. They attack. Period. You could show them pink, green, blue or yellow with magenta polka dots and they would still charge because they are reacting to movement and noise, not to color. When a bull is placed inside an arena it finds itself in a hostile environment full of screaming people so of course it’s going to attack.