An artificial intelligence (AI) lawyer chatbot – yes, that’s genuinely a thing – has successfully helped to void 160,000 parking tickets across London and New York in just under two years – all for free. According to The Guardian, it was created by a 19-year-old Stanford University student and self-taught coder who claims that it is “the world’s first robot lawyer.”

Joshua Browder, who was born in London, says that his DoNotPay chatbot assists its users in an easy, friendly way, and it certainly appears to be working. It’s already taken on a quarter of a million parking ticket legal cases, and it’s won 64 percent of them. That totals $4 million in fines that are no longer having to be paid.

My hamster stole my car, and DoNotPay's chatbot is handling it incredibly well. DoNotPay

After asking an aggrieved driver signing onto the site a few initial questions (the sort designed to see if an appeal is actually possible), the chatbot then carefully guides its customers through the legal ins and outs of the appeals process. AIs are often in the news for performing unbelievably complex tasks incredibly rapidly, but appealing a parking ticket is a relatively simple procedure, and a relatively simple AI such as this particular one is clearly able to do it remarkably effectively.

Importantly, the service is free. This means that many who would normally be reluctant to find a lawyer for fear of spending money on a case that may not go their way have a new risk-free option open to them. 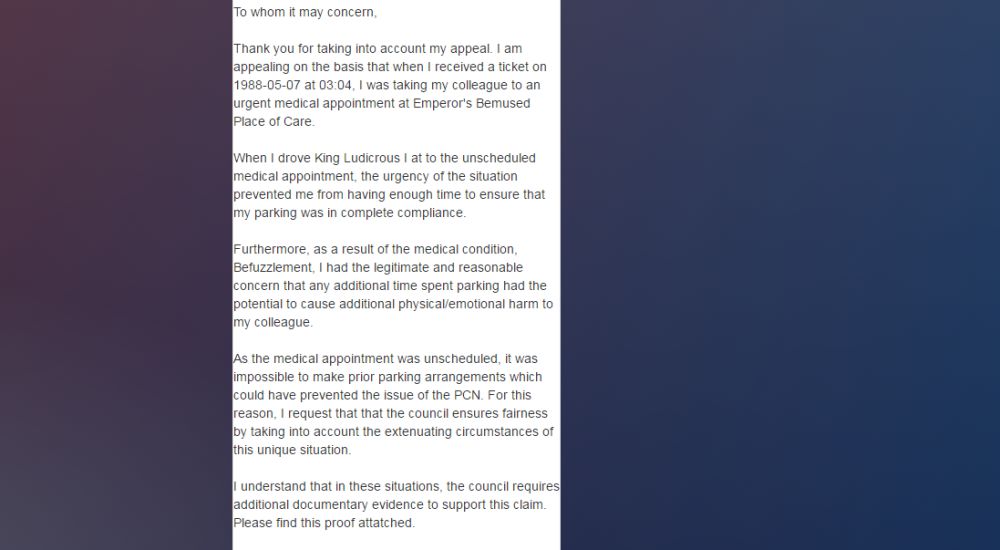 A DoNotPay-generated appeal ticket, by yours truly. DoNotPay

Browder intends to develop a DoNotPay chatbot lawyer for Seattle next, but his motivation seems entirely selfless: He doesn’t appear to consider those having to pay for parking tickets criminals, and instead sympathizes with those who have been unfortunately pounced on by the authorities for perhaps making a mistake.

Far from sticking to parking tickets, he’s expanding his virtual lawyer’s capabilities in order to help travelers seeking compensation for flight delays, patients regarding their legal rights relating to an HIV diagnosis, and even refugees apply for asylum.

“I feel like there’s a gold mine of opportunities because so many services and information could be automated using AI, and bots are a perfect way to do that,” Browder told Venture Beat. “It’s disappointing at the moment that it’s mainly used for commerce transactions by ordering flowers and pizzas.”

AI is capable of some remarkable things these days, whether it’s annihilating human opponents in complex games of Go, or besting any human fighter pilot our species can throw at it. Sometimes, AI does go a little bit awry – one particular incident of a Twitter bot evolving to become fairly racist and pro-Nazi made headlines earlier this year – but overall, it’s proving to be a wonderful augmentation to the human race.

Few would argue that this new chatbot lawyer is an exception to this rule. Clearly, not all heroes wear capes.