An incredibly rare and elusive black panther has been captured on film in Kenya. British wildlife photographer Will Burrard-Lucas used specially designed camera traps to take some astonishing photographs of the beguiling cat sneaking about the bush under cover of darkness.

Meanwhile, a team of scientists from San Diego Zoo have also managed to record footage of black panthers – likely a mother and daughter – in the same area, publishing an accompanying scientific study in the African Journal of Ecology. Excitingly, these researchers believe there are at least two, if not three black panthers in Laikipia County, Kenya.

Rather than being their own species, black panthers are actually just big cats – usually jaguars or leopards – with a genetic mutation that makes their fur black. This is known as melanism and is the result of unusually high levels of the pigment melanin. It is essentially the opposite of albinism, which is caused by a lack of pigment.

Melanistic leopards, the animal that Burrard-Lucas photographed, are found throughout Africa and Asia and have beautiful jet black fur with subtle dark spots, a feature often not visible in photographs. Worldwide, only 11 percent of leopards sport black fur. 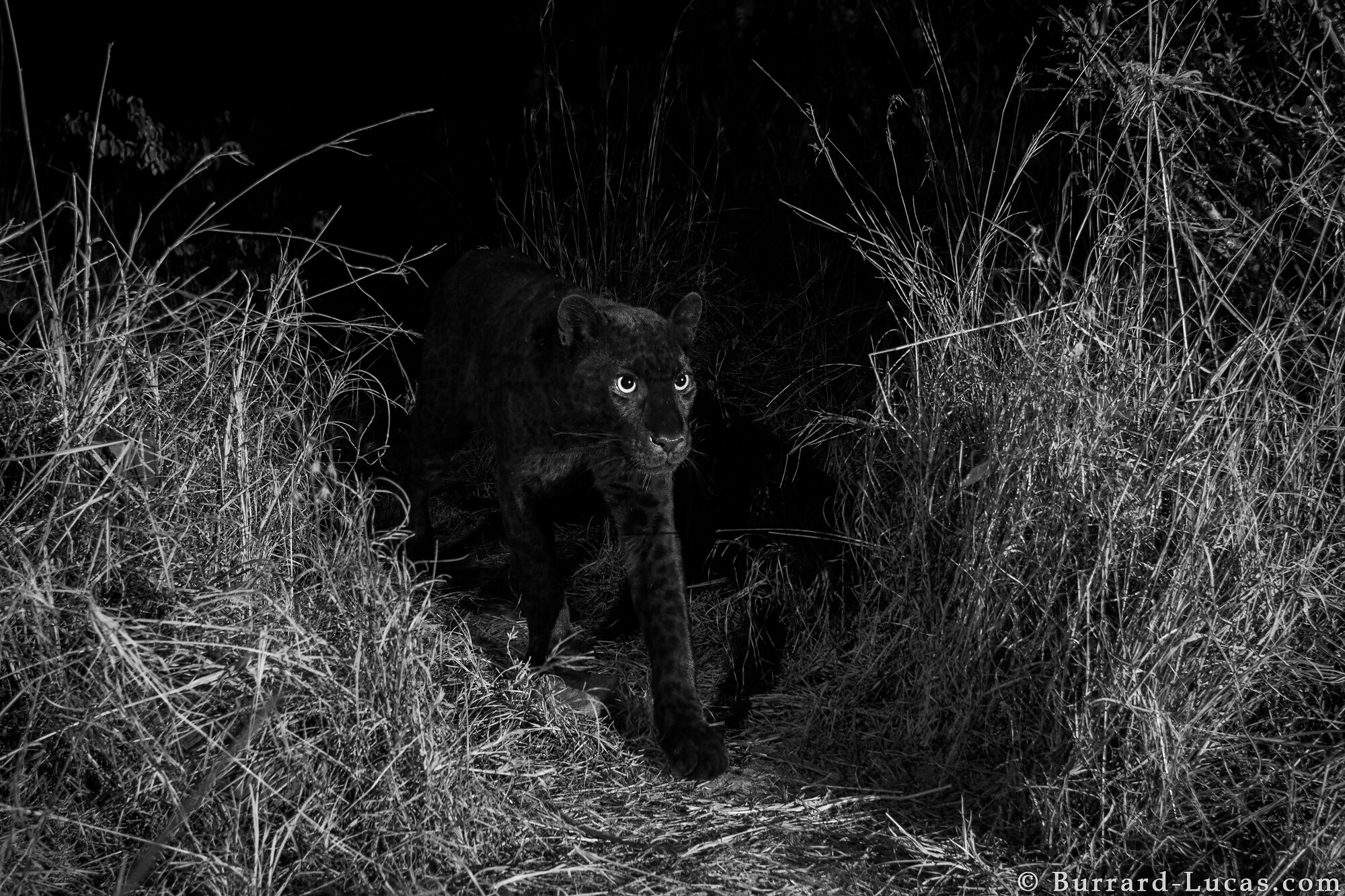 It is believed their unusual coloring gives the panthers an advantage in shady forested areas as they can lay low and sneak up on their prey, so they have mainly been documented in the tropical forests of Southeast Asia. In Africa’s arid shrublands, they don’t have this advantage – even in the dark, a black coat is easier to spot than one broken up by intricate patterns and contrasting colors.

“Black panthers are iconic creatures and yet very few images of wild black panthers exist,” Burrard-Lucas told IFLScience in an email. “This is not just because leopards are extremely secretive and hard to see, but also because only a tiny percentage of leopards are black.” 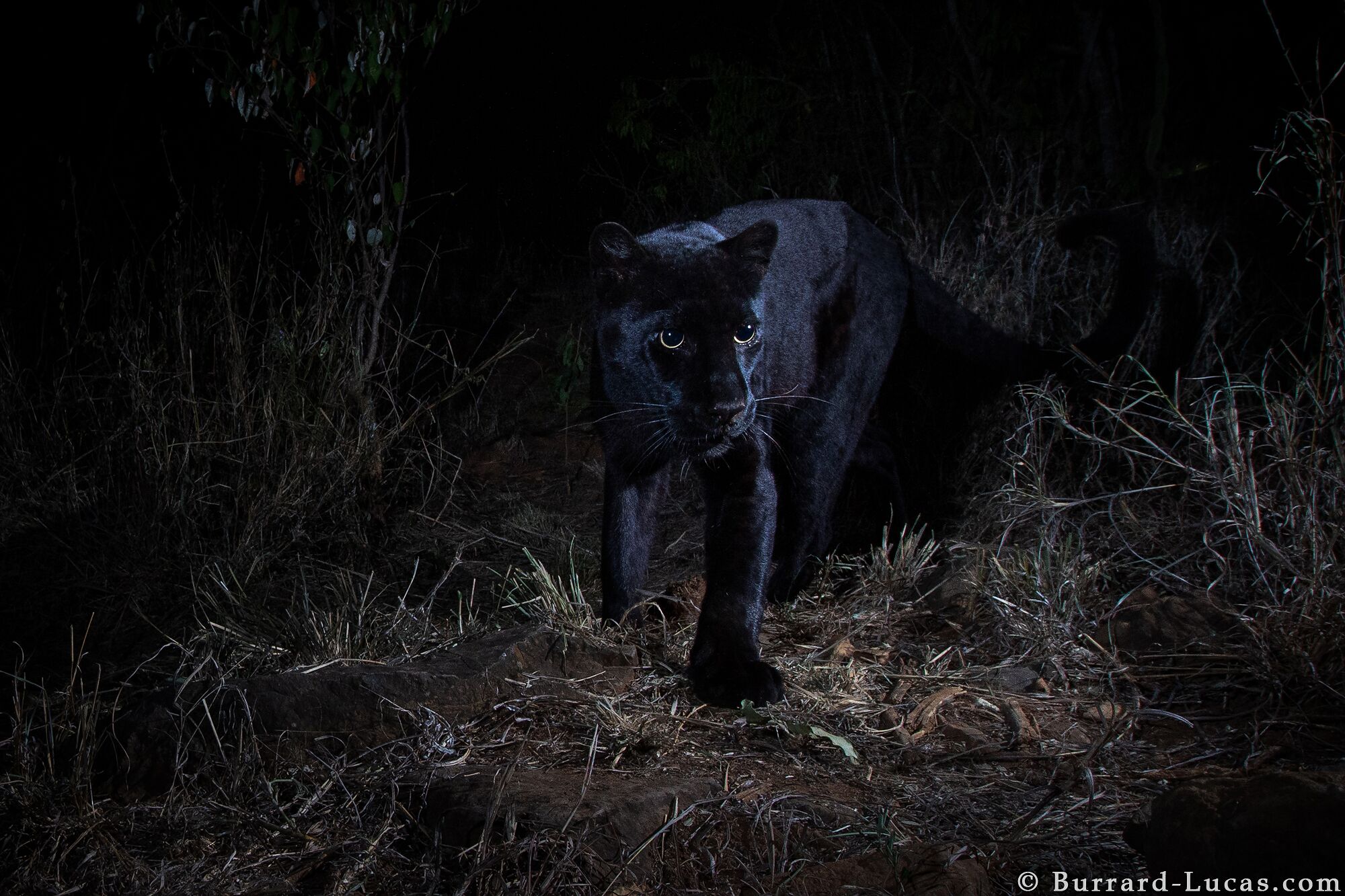 The new images provide the first scientific confirmation of black leopards in Africa in over a century, the last scientific documentation was in Ethiopia in 1909. But that doesn’t mean they haven’t been seen. In fact, Burrard-Lucas was made aware of a sighting at Kenya’s Laikipia Wilderness Camp and decided to head there to try to spot the elusive creature himself.

He set up Camtraptions camera traps in the area and eagerly returned to see what they had spotted. At first, all he saw was hyenas, but thanks to some patience, he finally got his reward. Getting a sense of the leopard’s movements, he repositioned his camera traps, managing to capture the panther again.

It then disappeared and was replaced by a majestic spotty leopard. “I have never been annoyed at capturing a spotty leopard on camera trap before!” he wrote in a blog post. “I suppose at least he was rather handsome…” 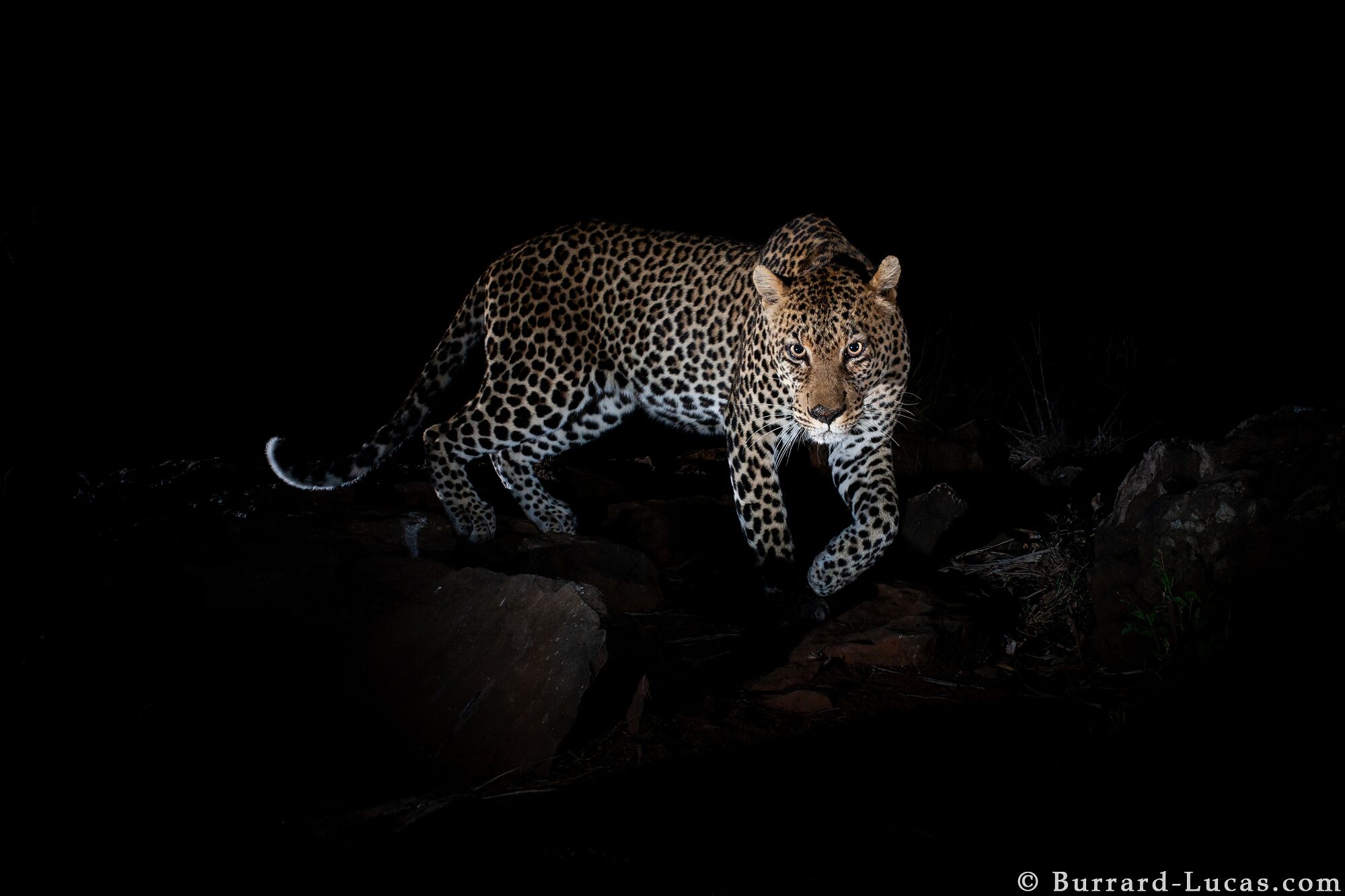 Then, the panther returned, allowing Burrard-Lucas to take two more incredible photos, one of the cat glistening in the light of the full Moon and another showcasing its piercing eyes glowing in the darkness, before it disappeared back into the night. 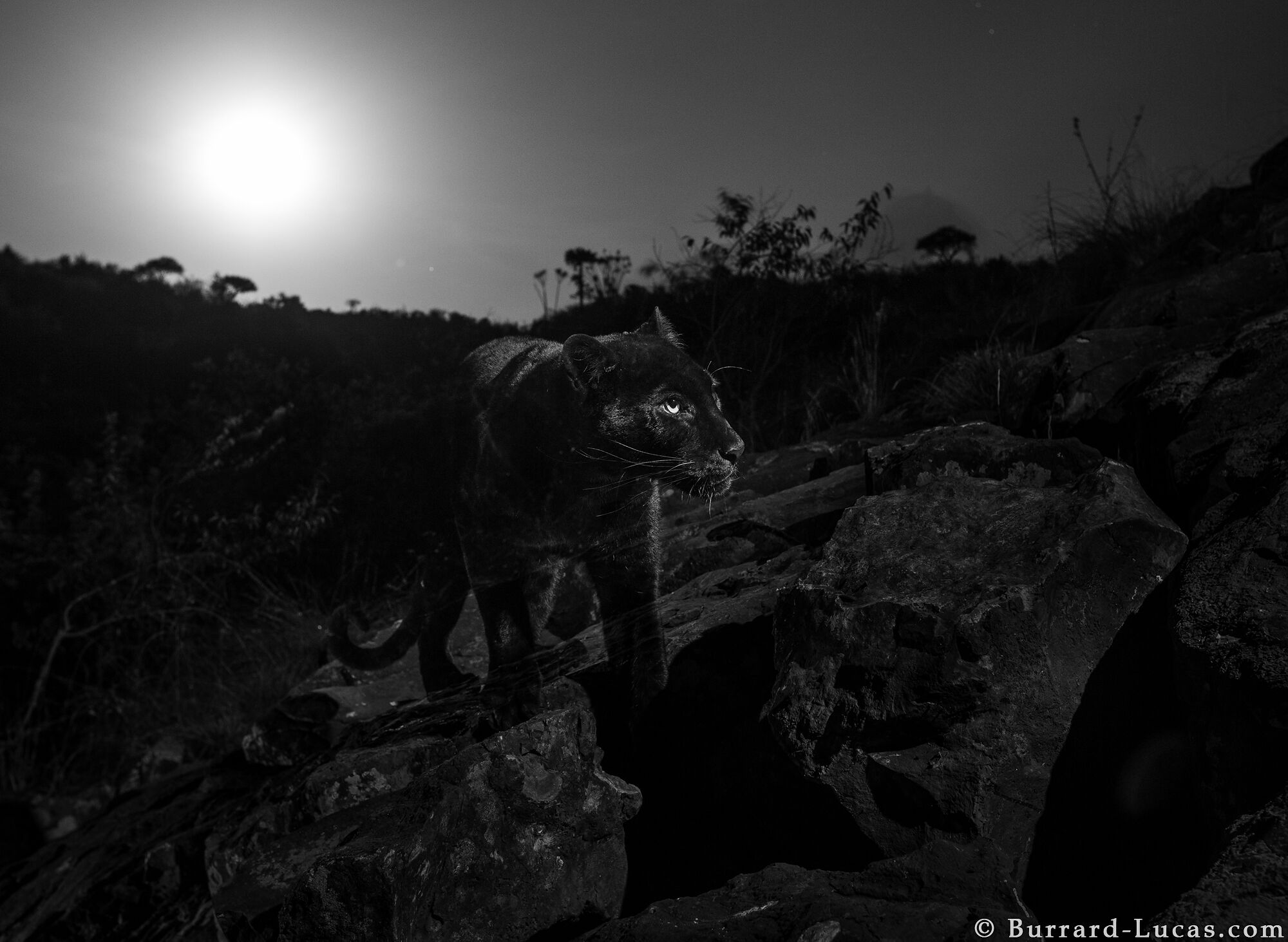 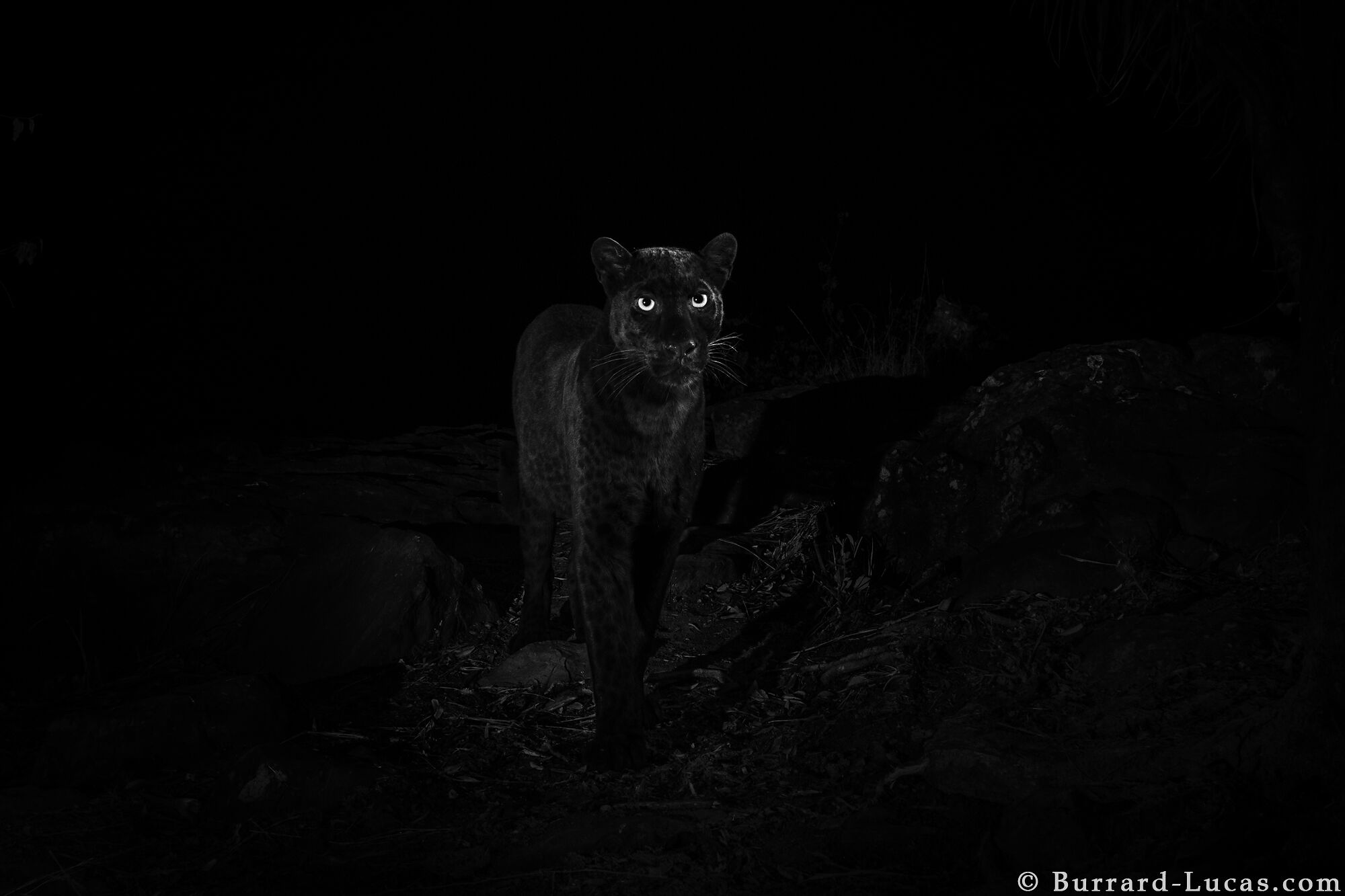 Burrard-Lucas notes in his blog post that people have expressed concern that publicizing the panther's presence could make it a target for hunters. While trophy hunting is illegal in Kenya, illegal poaching sadly does occur. Nevertheless, Burrard-Lucas also draws attention to the importance of encouraging wildlife tourism, as it not only supports those working in the industry and boosts Kenya's economy, it provides much-needed funds to essential conservation efforts too.