Ever since chemist Albert Hofmann drifted around the city of Basel on his bike after being the first person to take lysergic acid diethylamide (LSD), scientists have always wondered why its effects can often last even longer than a Pink Floyd box set.

”A lot of people who take the drug are not aware of just how long it lasts," Bryan Roth, co-author and professor of pharmacology at the University of North Carolina (UNC), said in a statement. "When I was younger, I would occasionally go to Grateful Dead concerts. A lot of people took LSD and similar drugs during concerts, and it would be interesting to be in the parking lot hearing people wondering when their LSD experience was going to end."

A new study, published in the open-acess journal Cell, has looked into the curiously long effects of the drug and found it’s all to do with how the chemical structure of LSD snuggly binds to receptors in the brain.

For the first time, the team managed to use X-ray crystallography imaging to capture an LSD molecule binding to a human serotonin receptor 5-HT2B. This type of receptor regulates the release of the "feel-good" neurotransmitter serotonin, which is typically associated with behavior such as sleep, appetite, well-being, and mood.

The thing that stuck out to the researchers was that part of the receptor protein had folded over the LSD, keeping it gripped inside. The molecule was also wedged into the receptor at an odd angle, which they didn’t expect, 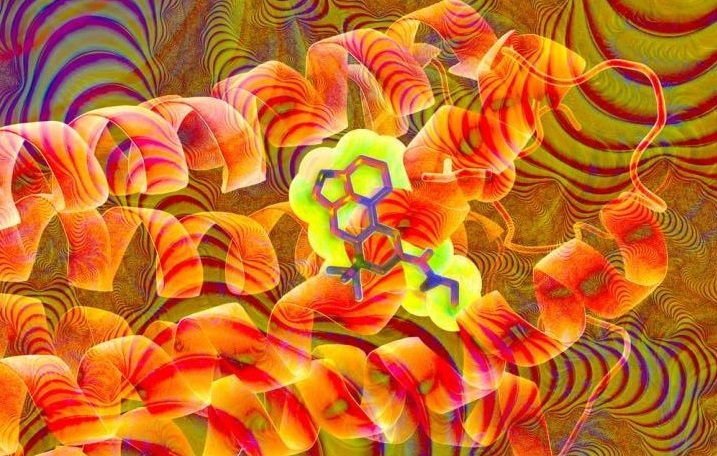 Artistic representation of the chemical structure of LSD – highlighted in yellow – interlocking into a red-orange ribbon diagram of the serotonin receptor. Annie Spikes

This helps explain why the hallucinogenic and “mind-altering” effects of an LSD trip can typically last anywhere between 12 to 24 hours, depending on how much is taken.

The new discovery might help explain why even taking LSD in tiny amounts, known as micro-dosing, can have a notable effect. Although micro-dosing has never been clinically tested, there’s anecdotal evidence that it could be used to boost creativity and help people with anxiety and mood disorders. The researchers are optimistic this research could be used by others to fine-tune micro-dosing for pharmaceutical use, potentially even using it to clinically treat depression, anxiety, and post-traumatic stress disorder.

“I think it's important for the pharmaceutical industry to understand that even if you modify just one tiny aspect of any compound, you may affect the way the entire compound sits in the receptor, and that affects the compound's performance," says study first author Daniel Wacker, a postdoctoral fellow at UNC.