Scientists have built a cyborg stingray that swims around using solar-powered heart cells. From futuristic medical devices to synthetic animals, this coin-sized critter has plenty of potential.

Technically known as a “soft robot”, it is comprised of a gold skeleton that is coated with a highly flexible polymer, which is a proxy for a real stingray’s “skin". Its internal muscles are made of 200,000 genetically-engineered, light-sensitive rat heart cells known as photovoltaic cardiomyocytes.

When these layered cells are exposed to light, they are briefly charged and they contract. This causes the polymer skin to move inwards, which allows the cyborg to swim. The gold skeleton stores some of this energy as the fins contract, which is later released, causing the cells to relax and move back upwards.

Although it can’t yet swim around by itself, it is by its nature designed to respond to the presence of light. So when anyone shines an asymmetric light on it, the cardiomyocytes experiencing the most energetic part of the light source contract, making it swim in that specific direction. The higher the frequency of light – and thus, the more energetic the light – the faster the cyborg swims.

In order to test how precise this locomotion method was, the team guided the cyborg stingray through a labyrinthine obstacle course. As described in their Science paper, it managed this with ease.

The international team behind this marvelous creation was led by Kevin Kit Parker, a professor of bioengineering and applied physics at Harvard University’s Wyss Institute. They’ve previously developed a cyborg jellyfish that also used cardiomyocytes, but its locomotive abilities are relatively simple compared to the stingray’s.

Parker’s team are working on developing a marine animal that’s even more complicated, but as he told New Scientist: “You’ll have to wait to find out what it is.” 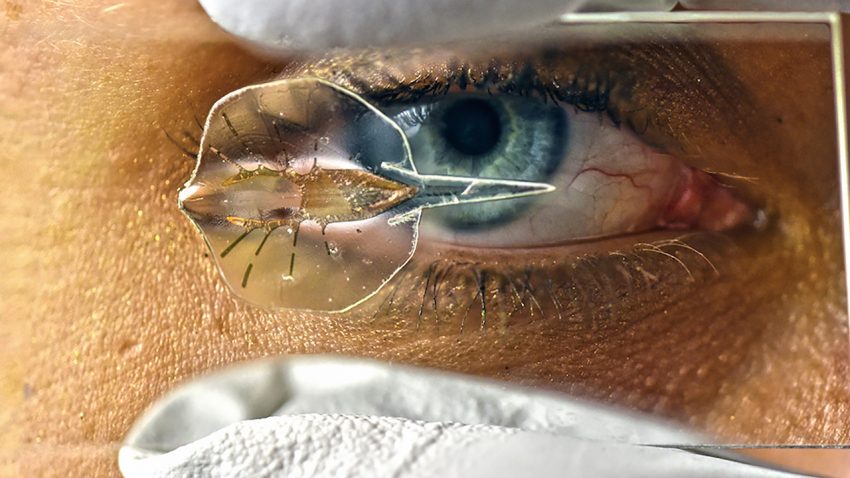 Weighing around 10 grams (0.02 pounds) and only 16 millimeters (0.63 inches) across, it’s roughly one-tenth the size of a real stingray. It’s sheer engineering brilliance aside, there’s actually a major benefit to this kind of robot.

Biological organisms react to a stimulus (light, heat, touch, and so on) by processing this information in their central nervous system, which then issues a voluntary (such as speaking) or involuntary (blinking, for example) response.

This cyborg stingray is different. As its cardiomyocytes are engineered to respond themselves to the stimulus of light, they are both the sensors and the actuators. That means that this stingray can react to environmental changes faster than conventional robots can.

This swimming mechanoid is an example of what the researchers refer to as “embodied cognition”, a concept that suggests that the mind does not just control the body, but the body influences the mind. In reference to this stingray, the authors note that its “thought process” is entirely distributed throughout its entire body.

They conclude that this system is a first step in paving the way to producing autonomous synthetic creatures, those that can be left alone to process multiple stimuli at once in complex environments. Self-sufficient robots without the need for a central artificial intelligence to guide them.

Of course, there’s also another tantalizing possibility that may yet emerge from this field of soft robotics. What if bioengineers now go on to develop cyborg hearts that can be jump-started simply by shining a light on them?