Almost all life on Earth requires phosphate. This presents a puzzle, because it is much less easily available than the other fundamental elements of life. How could the first life forms have acquired it? Now it has been shown that phosphorus is not a theoretical requirement for simple life, and may have been a later addition. If the idea wins widespread acceptance it could change how we look for life beyond Earth.

Until recently it was thought that all life forms required five elements: Carbon, hydrogen, oxygen, nitrogen, and phosphorus. The first four are abundant on Earth, but the last is not only fairly rare, but should have been hard to access when life first appeared. Although most organisms require other elements to live – 14 of them for humans – these vary by species and none pose the same conundrum for life's origins.

The first clue that phosphorus might not be universally required came with the discovery seven years ago of bacteria that use arsenic instead, but this might just have been an odd evolutionary detour.

Professor Daniel Segrè of Boston University has demonstrated it is possible to do without phosphorus in a different way, modeling potential chemical reactions with those molecules thought to have been easily available when life first appeared.

"Before our study, other researchers had proposed a sulfur-based early biochemistry, with hints that phosphate may not have been necessary until later," Segrè said in a statement. "What was missing until now was data-driven evidence that these early processes, rather than scattered reactions, could have constituted a highly connected and relatively rich primitive metabolic network."

Segrè reports in Cell that without phosphate (a phosphorus-oxygen ion) pre-biotic conditions could still have triggered 315 reactions leading to amino acids and other building blocks of life.

Where life forms today use adenosine triphosphate (ATP) as a storehouse and carrier of energy, Segrè's model used thioesters, a class of molecules that can include a range of more common elements. Meanwhile, iron-sulfur clusters, which would have been very common in volcanic environments on the early Earth, such as those where the oldest known fossils were found last week, add diversity to the possible reactions.

"My hope is that these findings will motivate further studies of the landscape of possible historical paths of metabolism, as well as specific experiments for testing the feasibility of a phosphate-free sulfur-based core biochemistry," Segrè said.

Once life forms evolved to the point where they could scavenge phosphorus from their environment they learned to make use of the extra power it offers. However, if Segrè is right, there is one less requirement for life to exist, expanding the places where we should be looking for it. 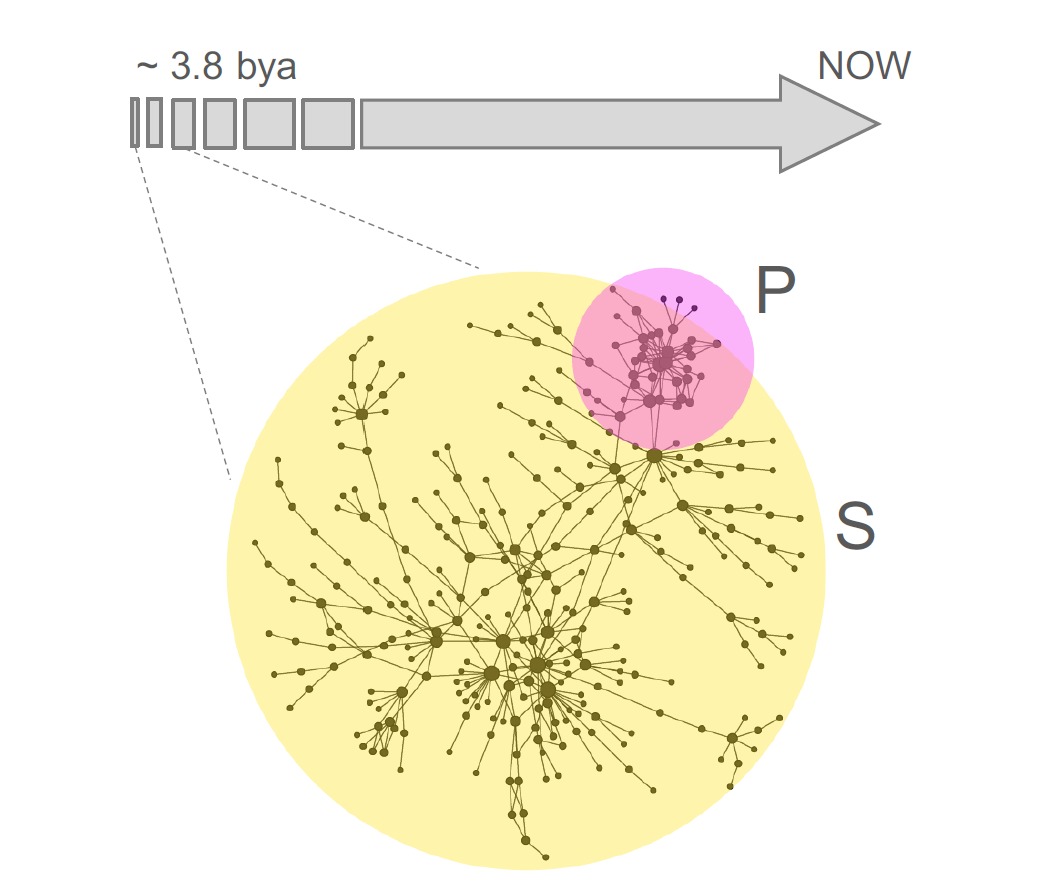 A schematic of how an early life form may have expanded from an initial set of pre-biotic molecules to eventually incorporate phosphate based reactions. Goldford and Serge