Solar energy had a big year in 2016. A report released at the Brussels SolarPower Summit confirms that 76.1 Gigawatts of solar were installed around the world last year, an increase of 49 percent from 2015, which in turn had been a record year for the industry. Although growth is expected to be more modest this year, the rebound after several years of somewhat slower growth is a lesson for those who, once again, had started writing solar off.

Through the course of 2016, it became clear that all expectations for solar installations were being exceeded. However, data comes in from some countries faster than others, so until now there's been some uncertainty about the global picture. According to SolarPower Europe, global solar capacity hit 305 GW by December 31. For comparison, at times of peak demand, Germany uses 70 GW from all sources combined.

The world market isn't rising in unison. China more than doubled its solar installations, the United States market grew by 92 percent, but in Europe less solar power was added than in 2015 and much less than the 2011 peak. However, when it comes to stopping the release of carbon dioxide into the atmosphere, it's the worldwide total that counts. 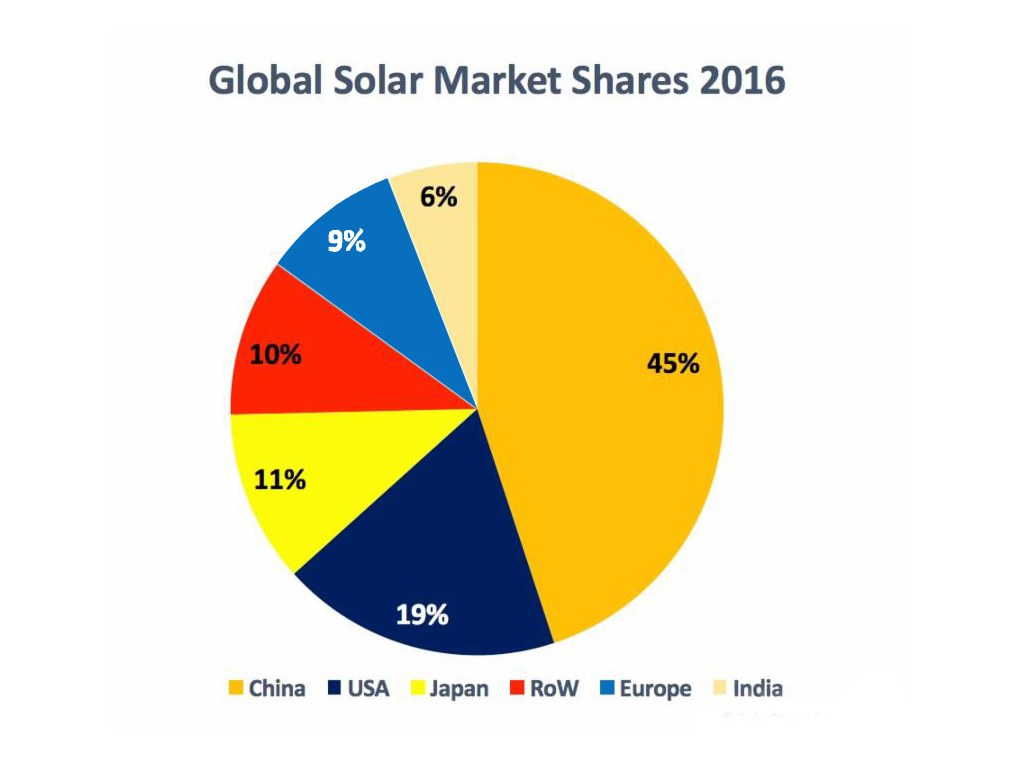 One of the few concerns in the 2016 solar market was how dependent global growth was on just one country. SolarPower Europe

When photovoltaic cells first started being produced commercially in the 1970s, they were hideously expensive and produced in tiny quantities for specialized uses where cost barely mattered. Powering satellites represents one such example. Not only is there plenty of sunlight above the clouds, but when you're spending millions of dollars launching something into space, you'll pay hundreds of thousands of dollars to power it if necessary.

The fall in price for solar, and the expansion of its market, went hand in hand. Cheaper panels were attractive in more circumstances, and bigger production runs brought prices down in a manner seen with computing technology.

Over the decades since, solar has experienced an average annual growth of 40 percent. The volume installed each year is now about a million times what it was in the '70s. Of course, such growth cannot continue forever – if it did, it would take less than 20 years before solar was producing more power than the total world demand for electricity.

After four years, when growth averaged 17 percent a year, many commentators started proclaiming the great solar slowdown had begun. However, there have been previous periods were growth was below 40 percent, just as in some years solar installation has more than doubled.

The big rise in 2016 shows it is far too soon to say the Sun has set on the era of solar's phenomenal growth.