The discovery of life around 3.48 billion-year-old hot springs in the Pilbara region of Western Australia could influence debate on where life first appeared on Earth. The news could also affect our choices about the best place to look for life on Mars.

Darwin proposed that life began in “warm little pond”, but in recent years the locations that most resembled this – the outskirts of volcanic hot springs on land – have been displaced as favorites by hydrothermal vents on the ocean floor. A conclusion between these competing theories would shape our choices about where to look for life beyond the Earth. Mars once had its own hot springs, while Europa and Enceladus are thought to have hydrothermal vents today.

The hot springs theory has been bedeviled by the fact that the oldest evidence we have for life at such springs was 400 million years old – yet we know from molecular clocks and marine fossils that life is at least 4 billion years old. Moreover, while plants and animals didn't make it onto the land until far more recently, microbes have been found in terrestrial locations dating back 2.7-2.9 billion years. Yet even this was considered puzzlingly recent if life's origins were at sites surrounded by land. It would be far more understandable if life took more than a billion years to get out of the oceans, than if it moved from on land pools.

So the announcement, by University of New South Wales PhD student Tara Djokic, that unambiguously terrestrial rocks almost 3.5 billion years old contain signs of life, shifts the debate. Djokic stressed to IFLScience that her discovery does not prove life began in hot springs, but it does remove arguments against that idea.

We may never be able to conclusively establish life's place of origin on Earth, but space is a different matter. All missions to Mars have been motivated in part by hopes of finding life, but the Mars 2020 rover aims to seek more directly. The list of possible locations for this mission has been slowly shortening and Djokic points out that of the three remaining locations, one – Columbia Hills, where Spirit landed – appears to contain the remnants of a hot spring. 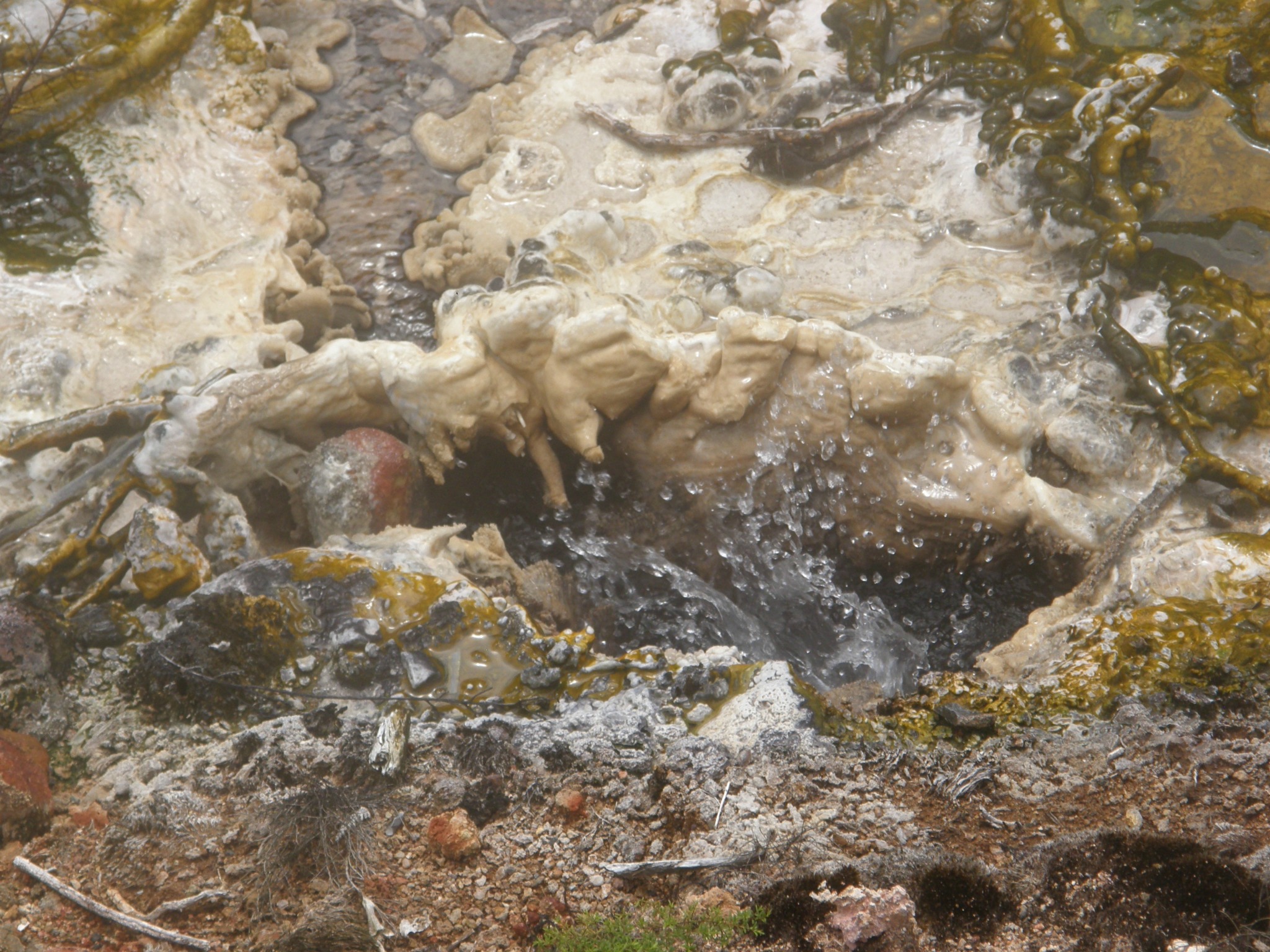 A modern hot spring. The colored areas indicate the presence of various sorts of life.

Djokic said it is possible her discovery will swing the debate in favor of Columbia Hills, since “If life can be preserved in hot springs so far back in Earth’s history, then there is a good chance it could be preserved in Martian hot springs too.” On the other hand, if hot springs really were the starting point for life on Earth, it is bad news for proposed missions to study moons in the outer Solar System where a layer of ice conceals an ocean with likely hydrothermal vents beneath.

Djokic was able to determine the springs she was studying were above ground, rather than being in shallow parts of the ocean, because they contain geyserite, a mineral deposit restricted to freshwater environments. Geyserite is formed when high-temperature silica-rich fluids are exposed to water. Prior to her work, no geyserite had been identified that was more than 400 million years old. Djokic told IFLScience it was not clear why such a large gap in the fossil record should exist, but she pointed out that volcanic environments are, by their nature, highly changeable, and many older sites may have been destroyed in eruptions.

Discovering such old geyserite would be interesting on its own. However, the reason Djokic's work was published in Nature Communications is that within the same ancient springs she found stromatolites, the layered communities of microbes that, in fossil form, represent some of our oldest evidence of life. Other indications of microbes, such as well-preserved bubbles, were also trapped in the same rocks. “This shows a diverse variety of life existed in fresh water, on land, very early in Earth’s history,” said co-author Professor Martin Van Kranendonk.

Some of what Djokic found looks a lot like fossils we have seen before in other environments, but she told IFLScience the bubbles and textures seen in some of the rocks look more like those seen around modern hot springs than at other ancient sites. Although we know little about the microbes that left these signatures behind, Djokic said there was probably a mix of life-forms living off sunlight and the chemical energy the springs provide.

These rocks in the Dresser Formation, Western Australia, include layers of geyserite, demonstrating the presence of long gone hot springs 3.48 billion years old.

Underwater Snow Exists On Earth And Maybe Europa Too
Astronomy