Underwater lava flows reveal that seawater gets cycled to depths within the Earth as great as 2,900 kilometers (1,800 miles), the boundary between the mantle and the outer core. The discovery of seawater trapped in basalt not only overturns theories about what happens when tectonic plates are forced beneath each other, but provides evidence the oceans and atmosphere that make life possible come from comets or icy meteorites.

“There are two different classes of basalt,” Dr Mark Kendrick of the Australian National University told IFLScience. One arises when mid-oceanic ridges pull apart, creating a gap in the Earth's crust through which the uppermost parts of the mantle spills before turning to rock when exposed to the ocean. The other sort occurs around oceanic islands, most famously Hawaii, where magma rises up from near the core/mantle boundary to be released by volcanoes.

Kendrick compared examples of each in Nature Geoscience and found evidence that water and other molecules trapped in oceanic island basalt comes from deep in the mantle. “It's very important that the lava studied come from the bottom of the oceans,” he told IFLScience. “The water pressure keeps the volatile materials, other than CO2, trapped inside.” If the lava is released into the atmosphere in a surface eruption these substances are released as gases.

“The combination of water and halogens found in the volcanic glasses enables us to preclude local seawater contamination and conclusively prove the water in the samples was derived from the mantle,” Kendrick said in a statement. 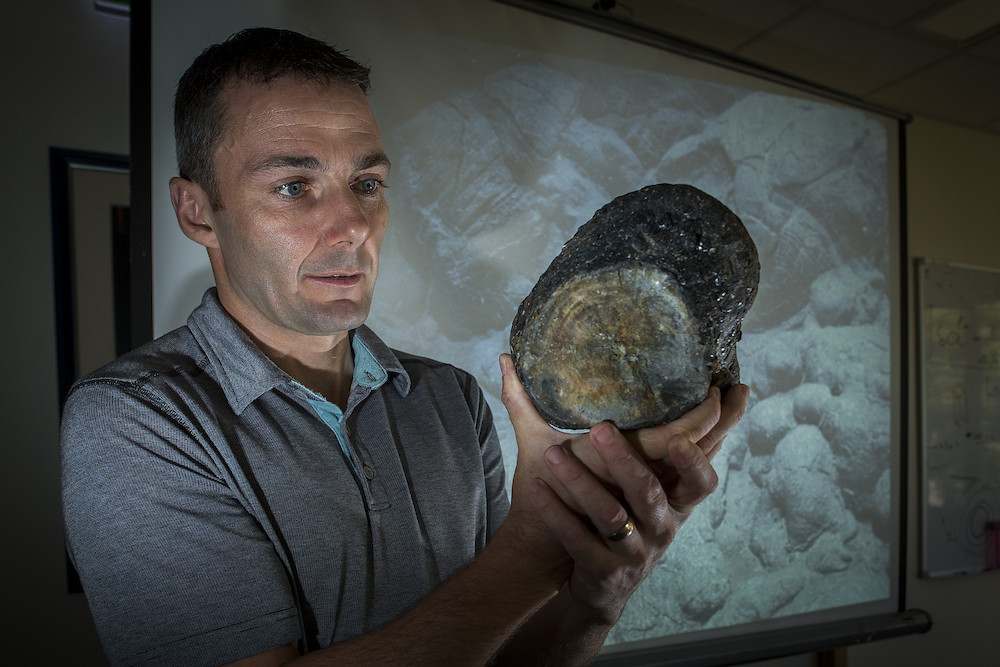 Dr Mark Kendrick with a sample of volcanic glass, with tiny amounts of water and gasses trapped inside Stuart Hay, ANU

The water is thought to reach such depths when tectonic plates, containing all the components of the Earth's crusts, get pushed beneath one another so that the lower plate descends into the mantle where the intense heat melts it. From there the components are subject to mixing processes we don't yet fully understood.

Besides being another example of how amazing our world is, the work is relevant to a very old debate: Where do Earths' oceans and atmosphere come from. Although water and various gases were present in the early Solar System, the bombardment Earth faced early in its existence from large objects would have seared the planet's surface.

This has led to two theories. One holds that water and certain gases survived within the mantle, and were released through volcanic eruptions. The other suggests comets and icy meteorites delivered fresh material to the planet once conditions had calmed enough for them to remain.

The debate has a long history – even Newton expressed the view that the atmosphere was of cometary origin long before we knew how Earth formed. The discovery of how deep water can go might appear to support the mantle as a likely store of water, but Kendrick says it is the opposite.

His work adds credibility to a recent study that found evidence the certain gases in the mantle got there by being absorbed from the atmosphere. This research suggests they were initially of cometary origin, rather than having been an original part of the mantle.