Last year, astronomers noticed something very odd about a star called KIC 8462852 – it was experiencing huge, unexplainable dips in brightness.

The theory that caught the public imagination, that aliens were building a giant “megastructure” around it, is almost certainly wrong, but the mystery continues to deepen. The latest development is that the overall brightness of the star has been steadily decreasing over the last few years, alongside these much larger dips in brightness. And none of the proposed theories can seemingly explain it.

Scientists used the Kepler Space Telescope to observe that the star became 3 percent fainter over four years. Even though it is very unlikely to be aliens, the explanation for KIC 8462852's behavior, when we find it, will probably shake up an area of astronomy – we just don't know which one.

During the time Kepler first observed KIC 8462852, it experienced a series of dips in brightness in a manner never seen in any star of its age and type. Several explanations were proposed, all of them unlikely; most famously, there was the explanation that aliens were building a vast construction around the star, occasionally obscuring our view. KIC 8462852, also known as Tabby's star, after Dr Tabetha Boyajian, the original paper's first author, was promptly dubbed the “alien megastructure star”.

Subsequent research suggested this idea is very unlikely. However, what was initially the leading alternative, a swarm of interfering comets, has a few problems too, leaving everyone bewildered. This year, some astronomers claimed to have found that KIC 8462852 has been dimming for a century, but in May a rival team argued this was an effect of using different telescopes, rather than real changes in the star.

Now, however, a pre-print of a yet-to-be peer-reviewed paper has been placed on arXiv, claiming Tabby's Star became fainter throughout the time Kepler was observing it. Unlike the original "dips", which saw KIC 8462852 fade briefly before returning to its previous brightness, the new claims are for long-term fading as well, which so far has not been reversed.

Authors Ben Montet, a graduate student at CalTech, and the Carnegie Institute's Dr Joshua Simon conducted an analysis of the raw pixel data from Kepler's 53 images of KIC 8462852 taken between 2009 and 2013. In addition to the week-long dip in brightness that first brought the mysterious star to wider attention, and the nine shorter dips, they report a slower but ongoing dimming.

The final 200 days of Kepler's observations may have involved a further small decrease in brightness, but the uncertainty in measurements is too large to be sure. A fall of around 3 percent is completely unprecedented for a star so similar to the Sun, though.

“Kepler was designed to detect and characterize events with timescales of minutes to hours,” the authors note, explaining why these long-term trends were not detected previously.

Montet and Simon analyzed 548 comparable stars in case the changes were an artifact of some unknown change to Kepler's sensitivity. Although 0.6 percent showed a decline in brightness similar to that seen during the first 1,000 days, none came close to the subsequent, much more rapid, drop.

“The part that really surprised me was just how rapid and non-linear it was,” Montet said to Gizmodo.  “We spent a long time trying to convince ourselves this wasn’t real. We just weren’t able to.” 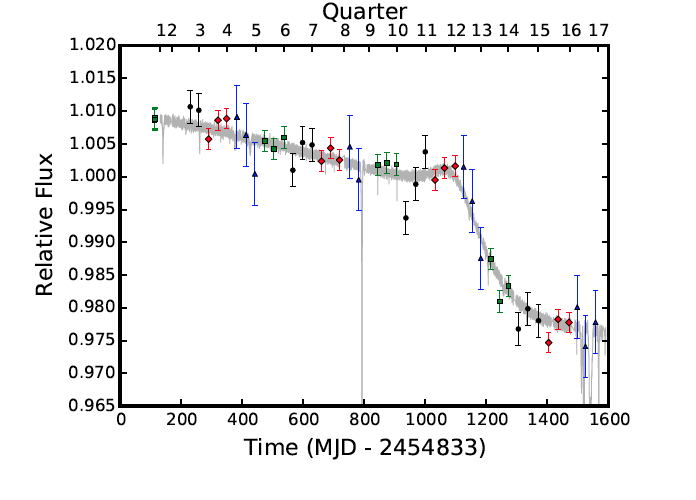 KIC 8462852's brightness with time. Kepler rotates every three months for protection against the Sun. Observations are color-coded by Kepler's orientation to ensure this was not affecting the dimming. Montet and Simon