Well, it’s official. On July 14 a signal was received that confirmed humanity had explored the last of the classical nine planets in the Solar System, when New Horizons successfully flew past Pluto.

But while the flyby is complete, the science of the mission is only just beginning.

At 8:52 p.m. EDT on July 14 (1:52 a.m. BST July 15), the missions operations team at the John Hopkins Applied Physics Laboratory in Laurel, Maryland, broke into celebration as New Horizons phoned home. This initial call was just a brief bit of telemetry, confirming the flyby was successful and data had been collected, but it was important nonetheless to know everything had gone to plan.

The flyby had actually occurred earlier on July 14 at 7:49 a.m. EDT (12:49 p.m. BST). It lasted two hours and 15 minutes, during which time New Horizons was out of contact with Earth as it performed hundreds of small maneuvers and came within 12,500 kilometers (8,000 miles) of Pluto's surface.

Unlike previous spacecraft like the Voyager probes, instruments on New Horizons were mounted to its body, which meant that the whole spacecraft had to move to point its cameras and instruments in different directions. This meant that during this process its main dish was not pointing towards Earth, hence the reason for the delay in communication. The Voyager probes had rotatable instruments, but New Horizons did not in order to save weight and time of development.

With the science complete, it then sent a short signal back to Earth for 15 minutes to confirm everything had gone to plan, a journey of 4.8 billion kilometers (3 billion miles), which took four hours and 25 minutes to arrive because of the large distance.

What have we seen so far and when will new images arrive?

The first high-resolution image of Pluto's surface was returned yesterday at 3:25 p.m. EDT (8:25 p.m. BST), revealing surprising icy mountains. The region was also devoid of craters, suggesting it was younger than 100 million years old and that Pluto was still geologically active. An image of the tiny moon Hydra was also returned, as was one of Charon and data showing methane on Pluto. New Horizons took this image on approach to Pluto. NASA/APL/SwRI

Today, we will get the sharpest images yet of Charon, 380 meters (1,250 feet) per pixel taken from 79,000 kilometers (49,000 miles). We should also soon get a view of another of Pluto's small moons, Nix. On Monday, we will get a final image of Pluto, but after that no new images will arrive until September 14 this year, with August dedicated to science data only, as there is much to be transmitted.

What science did New Horizons perform?

During the flyby, the spacecraft used its instruments in pre-planned routines. Its primary goal was to map the chemical composition of Pluto’s surface and its largest moon Charon, in addition to studying their geologies and atmospheres.

Secondary goals included measuring Pluto’s interaction with the solar wind, mapping the chemical composition of selected sites of interest, measuring surface temperatures on Pluto and Charon, observing their terminators (the border of day and night) and also performing limited observations of the four other moons: Nix, Hydra, Kerberos and Styx. 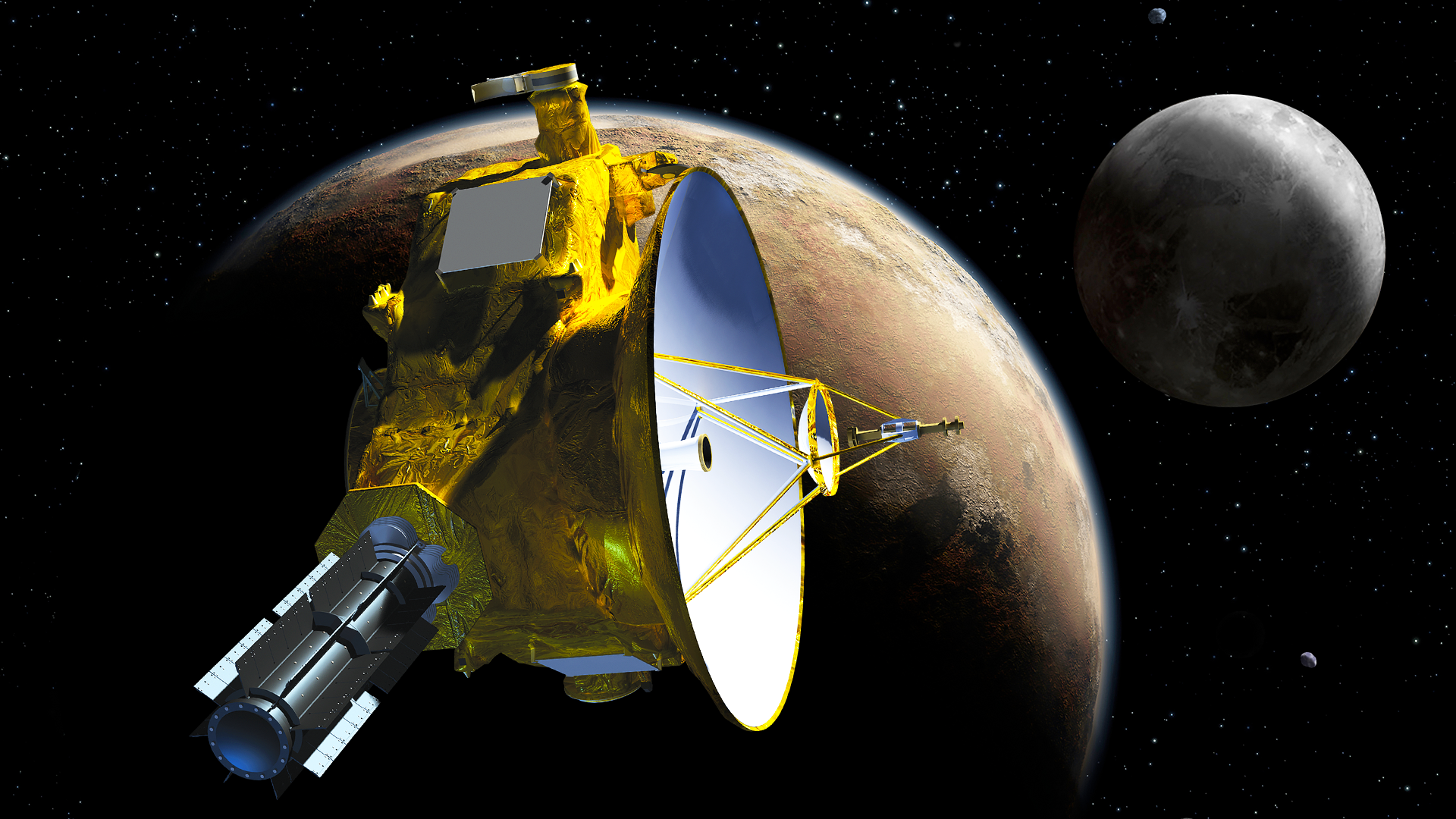 Some of the science that has already been discovered is tantalizingly fascinating. Yesterday in a press conference, Alan Stern, the Principal Investigator on the mission who is largely responsible for it happening, said that it “looks like it snows on Pluto.” A methane and nitrogen ice cap has also been spotted at its north pole. And thanks to refined data on the approach, we now know Pluto is 50 kilometers (30 miles) bigger than we thought, making it slightly larger than fellow dwarf planet Eris and thus the largest known object in the Solar System beyond Neptune.

How long will it take to transfer all the data?

In total, the spacecraft will have up to 16 gigabytes of data on board, stored in two solid state recorders. It is able to transfer data at about two kilobits per second to NASA’s Deep Space Network (DSN), but is not in constant contact with Earth as other missions must also be monitored by the DSN.

All in all, it will take 16 months for the spacecraft to transmit everything it gathered at Pluto, and many more years for scientists to analyze all of that compressed data. Major discoveries from the mission are expected to be made towards the end of 2015 or early in 2016. What will the spacecraft do now?

The spacecraft has obviously retained its velocity of 50,000 km/h (31,000 mph), so it is now speeding into the Kuiper Belt, a region of debris left over from the formation of the Solar System. Rather than letting the spacecraft go to waste, scientists will now pick several candidate Kuiper Belt Objects (KBOs) for it to explore, small rocks just tens of kilometers across, provided the mission is given additional funding to continue, which seems a certainty. The first KBO could be flown past as soon as 2019.

Thanks to New Horizons’ nuclear power source, a radioisotope thermonuclear generator (RTG), it can continue operating into the 2030s and can also be used to study the edge of the Solar System where the Sun’s influence – the heliosphere – ends and interstellar space begins, known as the termination shock. Only one spacecraft, Voyager 1, has crossed this boundary before, but New Horizons has a different set of tools on board that can provide new data.

The Kuiper Belt surrounds the Solar System and may contain hundreds of Pluto-sized bodies. NASA.

On board New Horizons are also the ashes of Pluto's discoverer, Clyde Tombaugh, who found Pluto in 1930. This means that, for the first time ever, human remains are on their way out of the Solar System.

So, while the climax of the mission at Pluto has passed, we are now entering arguably the most exciting phase of the mission. The trickle of data over the next year is set to be fascinating. Already we know that Pluto is not the grey, barren world some expected, but a strange brown and red dwarf planet that may yet have more secrets hiding on its surface.