Galileo discovered a point of light near Jupiter in 1610, which he initially thought was a star. A few days later he corrected himself and named the satellite Ganymede, which is not only the largest moon around Jupiter, but the largest in the entire solar system.  Over 400 years later, scientists have finally been able to complete a geologic map of the entire moon. The study was led by Wes Patterson from the Johns Hopkins Applied Physics Laboratory and was published by the U. S. Geological Survey.

Ganymede is the third of the Galilean satellites and takes about a week to revolve around Jupiter. Its diameter is actually larger than the planet Mercury but it has just one quarter of Mercury’s mass. Ganymede also has a special property that no other moon in our solar system has: a magnetosphere. Scientists believe that Ganymede’s core is made of molten iron, just like Earth.

Ganymede has been imaged thoroughly during the Voyager and Galileo missions, images which were integral to making the geological map. This is the fourth map of its kind to be created, which categorize differences of the terrain which formed at different times. Geologic maps exist of two of Jupiter’s other moons, Io and Callisto, as well as Earth’s moon. The information will be used in order to help understand how the moon was formed and how it changed over time due to collisions.

Ganymede’s surface is composed mostly of ice with a mantle of rock surrounding the molten core, but there are incredibly interesting geological features. The darker areas are the oldest regions of the moon. There is a considerable number of craters due to impacts over the course of the solar system’s history. The lighter regions are relatively younger and are thought to have been formed by tectonic activity which was influenced by a dynamic gravitational relationship with Jupiter’s other satellites. The gravitational pull likely caused tectonic friction, which heat up the ice enough to crack it and for water to escape out. Once at the surface the water could freeze over again, essentially making ice scars.

Scientists have noted that nearly every geological feature discovered on an icy moon can also be found on Ganymede, making this map an incredibly useful tool in understanding how the surface topography formed and evolved.

The full map, which includes several other images and an extensive legend, can be viewed on the website for the U.S. Geological Survey. Image credit: USGS 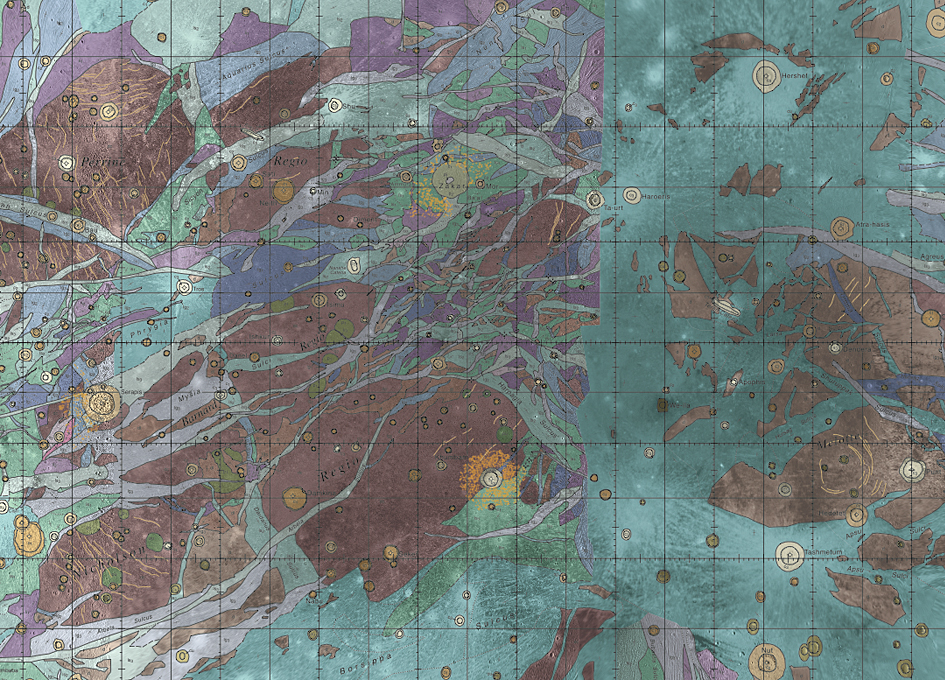