A groundbreaking study this week has concluded that humans may have been in North America as early as 130,000 years ago, 100,000 years ahead of what most experts thought. This is a truly mind-blowing revelation – and a brand new PLOS One study has just augmented it somewhat.

It’s long been established that humans have been using weapons like spears and daggers made out of wood and flint, obsidian, or chert for many millennia. Until around the year 2010, archaeologists thought that the ability to use a technique called “pressure flaking” – wherein the edges of stone tools are trimmed to make them particularly sharp – dated back to no more than around 20,000 years ago.

However, studies then rapidly pushed this date further back, with one particularly notable piece of research uncovering pressure flaked tools in a South African cave that dated back 75,000 years ago. Now, a team led by the University of Liège, Belgium, has revealed that they’ve found advanced weaponry in another South African cave dating back to 77,000 years ago.

The stone weapons – described rather marvelously as “dangerously pointy” by one report – were uncovered in 2013 and 2014 inside Sibudu, a cave around 15 kilometers (9 miles) away from the coastline facing the Indian Ocean. They clearly show marks that indicate a pronounced bone implement was used to chip away small segments of the rock from an already sharp stone fragment.

In order to confirm that pressure flaking was used here, the team reproduced the weapons experimentally, and found that their suspicions were confirmed. 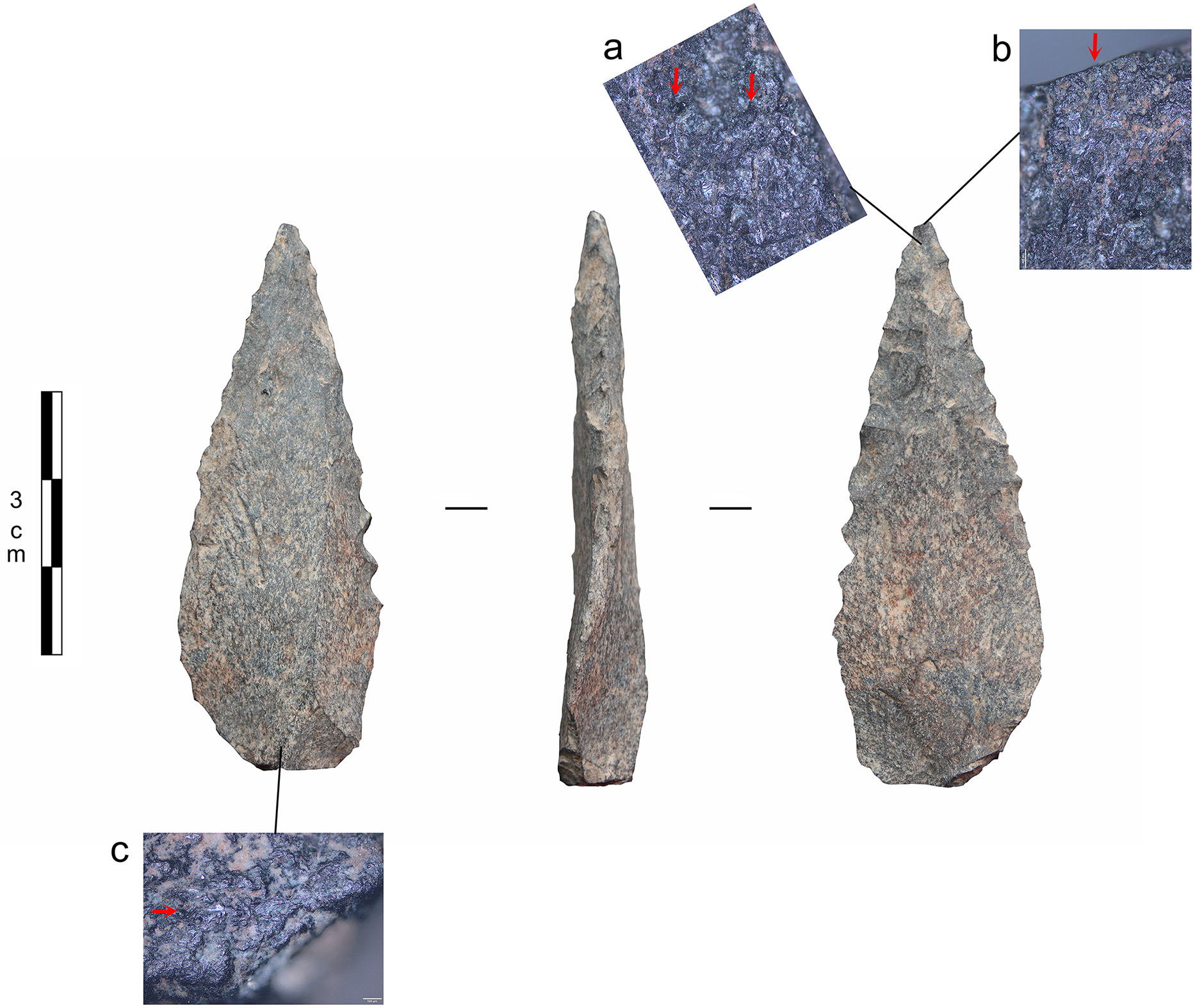 Example of wear traces on one of the sharpened stones found at the site. Rots et al. 2017/PLOS One

Some of the sharp stones were found to have been sharpened on both sides. These so-called “bifacial” stones were apparently once attached to long sticks using some form of natural adhesive, and used as spears during hunts.

The evidence is so comprehensive and clear that the team “argue that the [evidence at] Sibudu should be taken as a reference for the South African Middle Stone Age,” a period of advanced technological development whose precise timing has remained elusive. These 25 pressure flaked weapons have at the very least put a firm date on it.

It may seem like we’ve come a long way since then as a species. Certainly, when it comes to technology, we most definitely have – but remember, we aren’t the only species to have entered the Stone Age. Several primates have been found to fashion tools to be used to obtain hard-to-get food, including macaques and capuchins, the latter of which have been using stone tools for at least 700 years.

Chimpanzees, however, are currently the frontrunners. Archaeological evidence shows they entered the Stone Age around 4,300 years ago – and today, they’ve been found to make and use spears to hunt bush babies and fish.