It is very difficult to know when star will explode, but Refsdal’s supernova is a slight exception. Scientists had predicted it would explode in the first few months of 2016 – but it has actually exploded in the past week. Fortunately, Hubble was ready to snap a shot of the event in action.

It takes millions of years for an old star to get to the point of no return and the explosion lasts for a few weeks at best. So following the prediction, Hubble had been periodically peering at the galaxy cluster hoping to see the supernova, and it finally spotted it last week. The image above was taken by Hubble on December 11.

Refsdal’s supernova is about 10 billion light-years away, meaning we are looking at a snapshot back in time. It has only taken 10 billion years for the light to reach us, though, thanks to a lensing effect.

The galaxy that hosts the Refsdal’s supernova was gravitationally lensed (magnified) by a large galaxy in the foreground. The lensing cluster created the impression of multiple images of the same galaxies. As the photons follow different paths, their light doesn’t reach us at the same time, which allows for time-delayed observations.

Refsdal’s supernova has been observed by astronomers five times already, thanks to other lensing effects that show different snapshots in time.

"While studying the supernova, we realized that the galaxy in which it exploded is already known to be a galaxy that is being lensed by the cluster," explains Steve Rodney from the University of South Carolina and coauthor of the study, in a statement. "The supernova's host galaxy appears to us in at least three distinct images caused by the warping mass of the galaxy cluster." 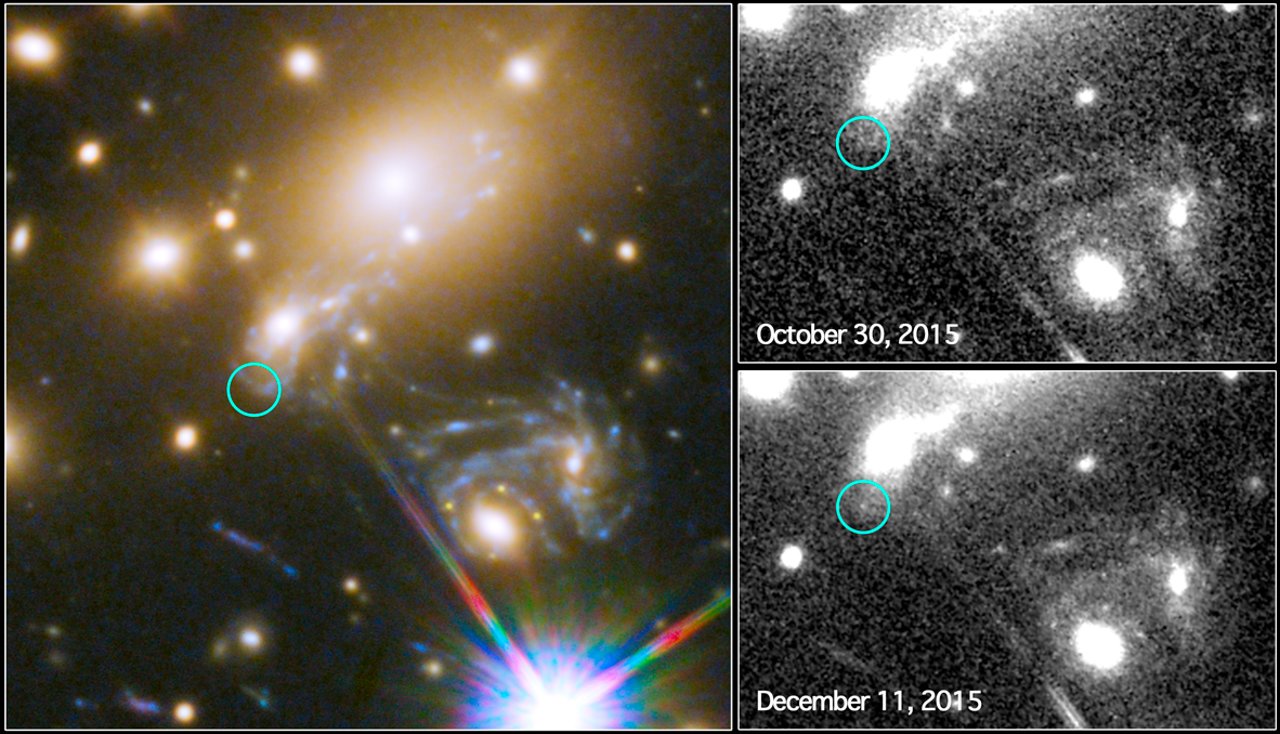 This image composite shows the search for the supernova, with the greyscale observation in October and the discovery from last week. NASA/ESA/HST

Supernovae are one of the most spectacular events in the universe. When a star at least eight times more massive than the Sun reaches the end of its life, it collapses under its own weight. The free fall compresses material until the pressure at the core is enough to generate the fusion of heavy elements and the energy created blows the star apart.

The detection of the supernova allows astronomers to understand how dark matter is distributed in the galaxy cluster, as well as improving our understanding of the expansion of the universe. More details about the latest observations can be found in the science paper from the Hubble team.