Our ears to the sky have just become a lot more sensitive. China has finished constructing the Five-hundred-meter Aperture Spherical Telescope (FAST), the largest radio telescope in the world.

The telescope costs $180 million dollars (1.2 billion yuan) and took five years to build. It is significantly larger than the US operated observatory in Arecibo, which is 305 meters (1,000 feet) across.

The last triangular panel was placed in the reflector on Sunday, with FAST now all set to start observations in September. And it's safe to say scientists are looking forward to it.

"As the world's largest single-aperture telescope located at an extremely radio-quiet site, its scientific impact on astronomy will be extraordinary, and it will certainly revolutionize other areas of the natural sciences," Nan Rendong, chief scientist with the FAST Project, told Xinhua news agency.

The telescope is located in a three-hill valley in China's southwestern province of Guizhou. This site was selected both for its natural depression, meaning lower constructions costs, and because it is located far away from nearby towns. There is a 5-kilometer (3-mile) area around the facility that separates it from any human activity, thus reducing potential interference.

During the early science phase, which will last two to three years, the instrument will be tweaked and adjusted to reach peak sensitivity. Once the early operation phases are completed, the telescope will be open to scientists around the world, according to Peng Bo, director of the NAO Radio Astronomy Technology Laboratory. 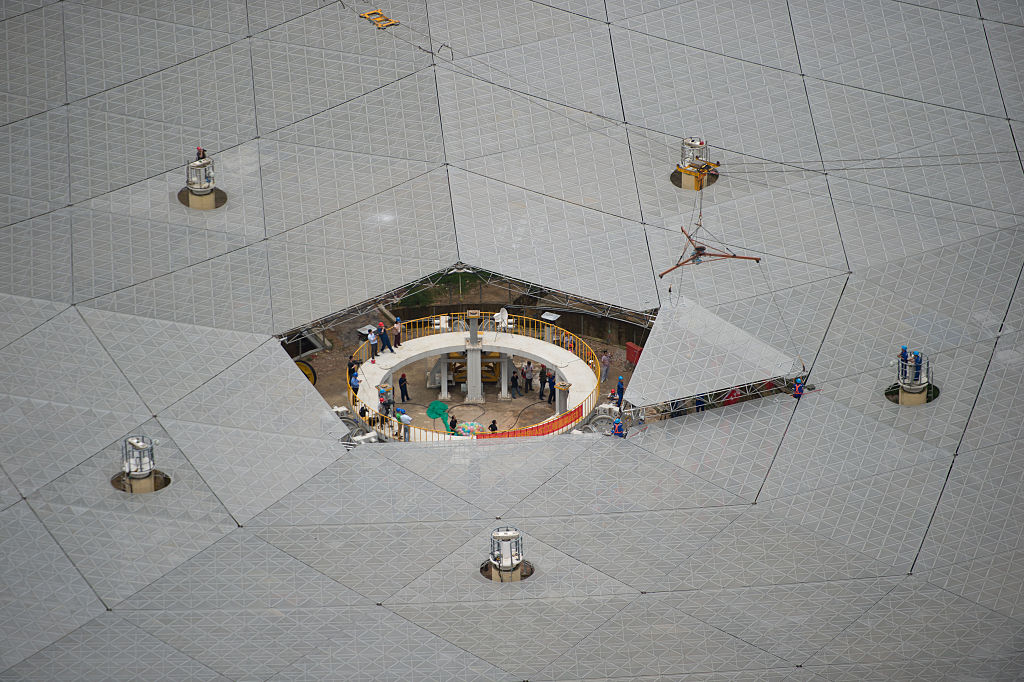 With the positioning of the last few triangles, each with an 11-meter (36-foot) side, the world's largest radio telescope is complete. VCG/Getty Images

The telescope will be able to study faltering and far-off astronomical events, from faint pulsars to neutral hydrogen in the early universe. The telescope team is also hopeful for the detection of amino acids, the building blocks of life, in interstellar space.

The site could also be used in the search for extraterrestrial intelligence. "FAST's potential to discover an alien civilization will be 5 to 10 times that of current equipment, as it can see farther and darker planets," said Peng Bo.

Radio telescopes are hugely important in astronomy, assisting and reinforcing the findings from other instruments as well as providing a unique look at the universe.