Astronomers have made a huge discovery in the search for life beyond our Solar System, describing a whopping seven Earth-sized worlds in orbit around a nearby star. At least three of them may be habitable – and we could find out if they are inhabited within a decade.

The system is around a star called TRAPPIST-1, a small ultra-cool dwarf star 40 light-years away that’s about 8 percent the mass of our Sun and 11 percent its radius, similar in size to Jupiter. Last year, it was revealed that three potentially rocky worlds orbited this star, and now this new study has found four more.

A paper describing the incredible findings, led by Michaël Gillon of the University of Liège in Belgium, was published today in Nature. The discovery was made using NASA’s Spitzer Space Telescope and a variety of ground-based telescopes, including TRAPPIST-South in Chile, to observe the transits of the planets relative to us as they passed across their star.

“The star is so small and cold that the planets are temperate, which means that they could have some liquid water and maybe life by extension on the surface,” Gillon said in a press briefing.

A video summary of the findings is above.

In order of their distance from the star, the planets are called TRAPPIST-1b (the innermost), c, d, e, f, g, and h (the planets d, e, f, and g are newly discovered). The researchers were able to work out the mass, radius, and orbital periods of all seven of the planets, save for the outermost, TRAPPIST-1h, of which only one transit was seen.

Being such a cool and dim star, its habitable zone is much closer in than our own Solar System. The planets e, f, and g all orbit in this zone, suggesting they could support liquid water oceans on their surface.

The finding is particularly exciting because, being so close to Earth, we will be able to study the planets of this star in detail. And not just in the future, but right now. Follow-up observations are already underway, and it’s possible we could know if life exists on one or more of these planets very soon by studying the molecular composition of their atmospheres. 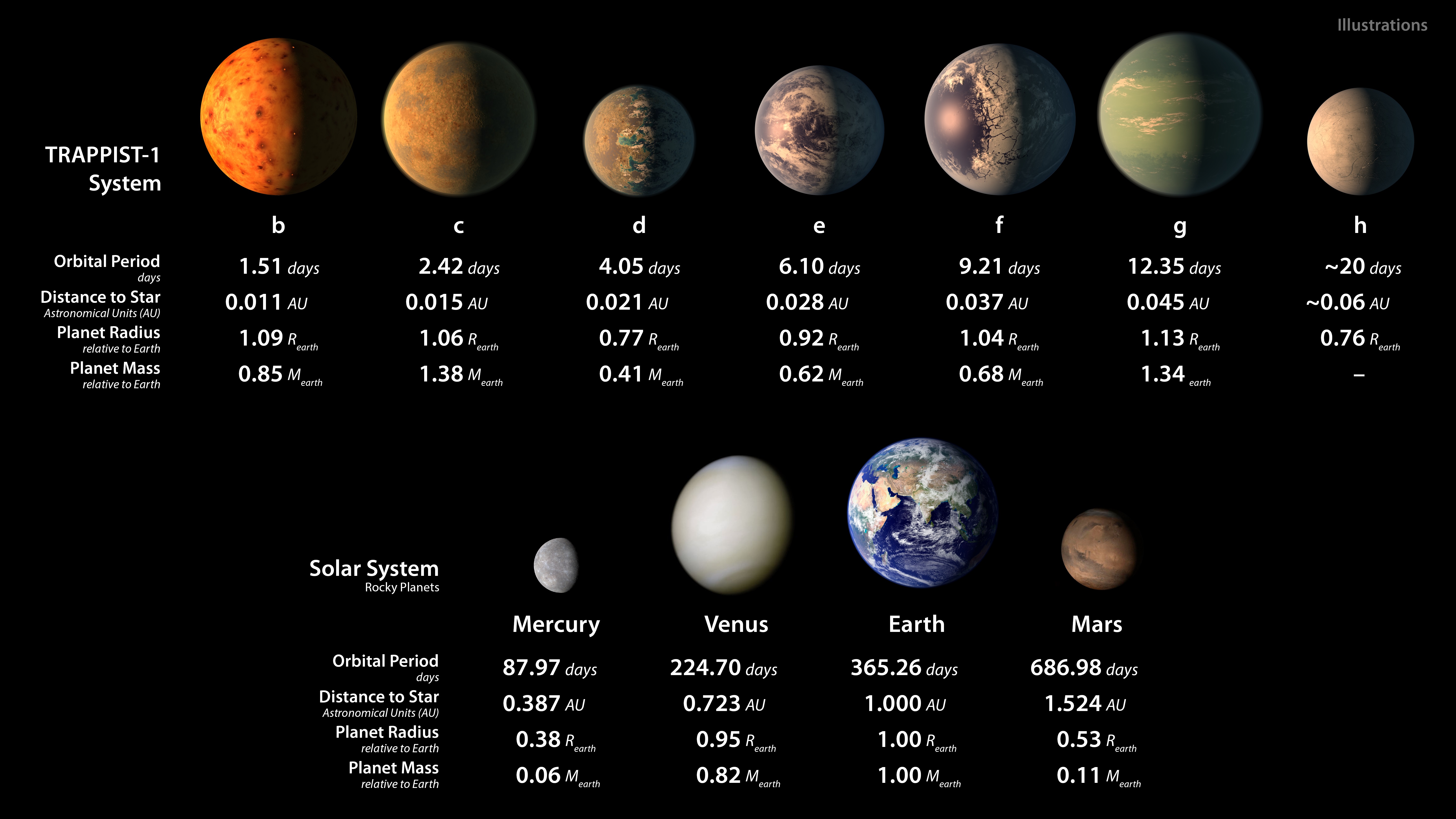 The known data on each of the planets compared to the rocky worlds in our Solar System. NASA/JPL-Caltech

“I am personally convinced that if there is biological activity on a scale similar to what see on Earth, then we should get to know that fairly soon,” co-author Amaury Triaud from the University of Cambridge told IFLScience, adding that within a decade “sounds reasonable.”

It’s highly likely that all seven planets are tidally locked to the star, meaning the same face always points towards it. This means that, if water does exist on some of the worlds, it may be liquid on just the star-facing side, with the other being ice.

All seven of the planets are also thought to have migrated from further out in the system to their inner positions, where ice on their surfaces has melted.

If there is life on any of the worlds, conditions likely wouldn’t be that similar to here. For one thing, the star itself would appear salmon-like in color, according to the researchers, with most of the solar radiation being infrared – which would still warm the planets, but would not be visible to creatures like us.

“The spectacle would be beautiful, because every now and then you would see another planet about twice the size of the Moon in the sky.”

This amount of infrared light makes the planets an especially good target for upcoming telescopes like NASA’s James Webb Space Telescope (JWST), due to launch in October 2018, which will observe the cosmos in infrared wavelengths. It could work out their atmospheric compositions by looking at the star’s light passing through, and hunt for signs of life. 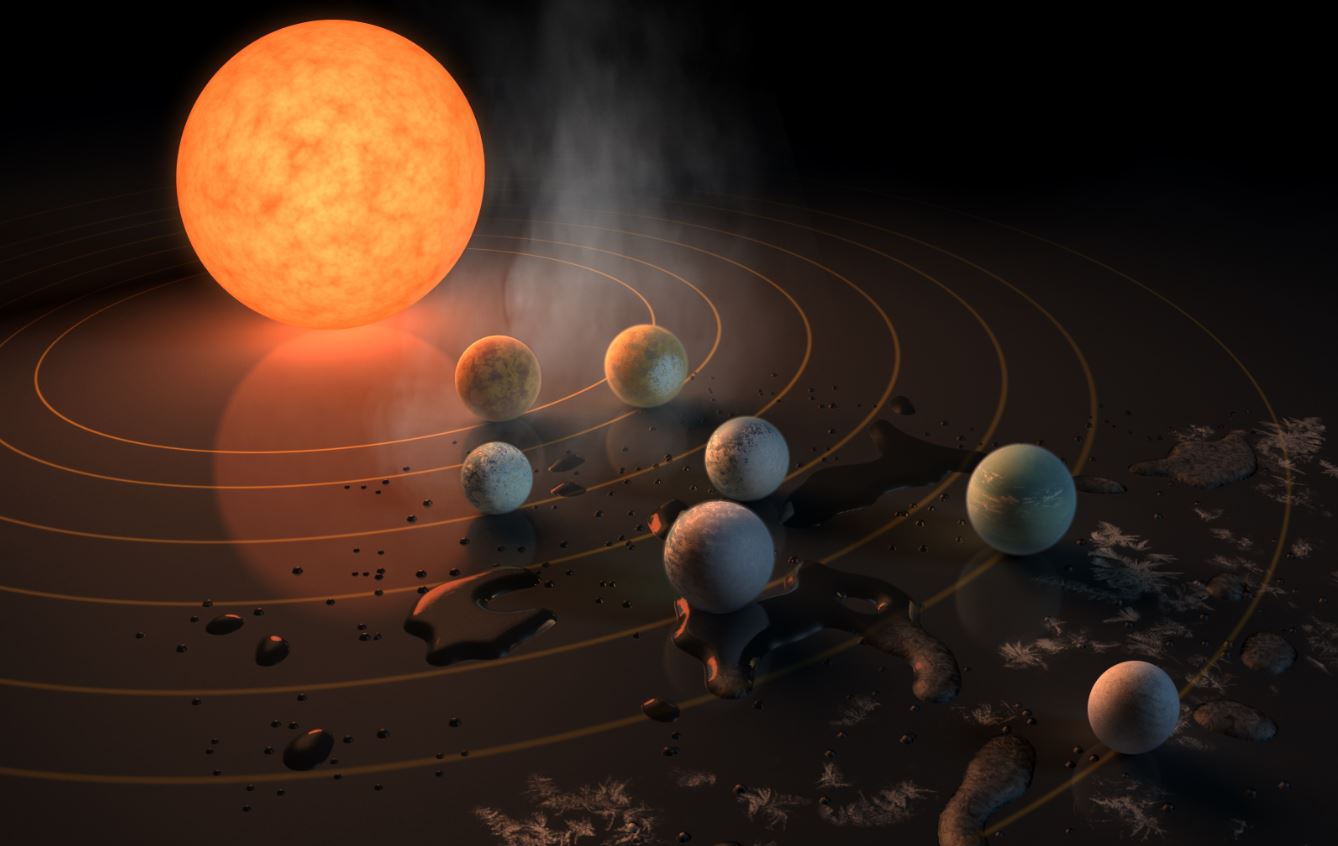 The seven planets may have migrated further into the system. NASA/JPL-Caltech

Exactly how habitable these planets might be is up for debate. Recent studies have suggested that cool, dim stars like this undergo frequent and powerful solar flares, which could be detrimental to life.

But the researchers say this particular star is fairly quiet, especially compared to a star such as Proxima Centauri, the closest star to Earth around which the potentially habitable world Proxima b orbits. And it’s thought that solar activity could also help replenish an atmosphere, rather than destroying it.

This star is 10 times further away than Proxima, however, so we don’t have much hope of sending a spacecraft to this system through a project like Breakthrough Starshot. “I think we are far from being able to send a robotic probe to TRAPPIST-1,” Triaud told IFLScience. But the potential for further astronomical study is huge.

It’s easy to get excited, though, and rightly so. This is the most number of Earth-sized planets we’ve ever found in one system, and while this may turn out to be common around other stars, TRAPPIST-1 is certainly one of the closest for us to study.

Being so close to their star, it will be almost impossible to directly image these worlds. But the transit method, used to find them, will prove vital in studying them as we watch light come through their atmospheres. Keep your eyes peeled, because you can be sure there’ll be plenty more news about TRAPPIST-1 in the coming months and years.

“We’ve made a crucial step towards finding if there is life out there,” Triaud said in the briefing.