Archaeologists are studying a group of stones that line up with the Sun at the solstices and equinoxes, and think it may represent the world's oldest astronomical observatory. The Australian site is particularly notable because it is only recently that archaeologists recognized that the Indigenous people of the area built permanent dwellings and practiced agriculture, rather than being nomadic hunter-gatherers, as previously assumed.

Although Stonehenge in the UK is the most dramatic and famous, many sites were built by ancient peoples to track the movement of the Sun and Moon, providing them with an indication of when the seasons were turning and often used as sites for spiritual ceremonies. Some, such as Stenness in Orkney, an island off the coast of Scotland, were extraordinarily sophisticated, aligned to reveal events that happen only once every 19 years.

However, the quest to find the oldest such site may have been looking in the wrong place, focusing on locations in Europe and the Middle East, the oldest of which dates back 7,000 years. The hundred basalt stones that form the Wurdi Youang stone arrangement, west of Melbourne, have yet to be dated accurately. However, Monash University's Dr Duane Hamacher, an expert on Australian indigenous astronomy, told IFLScience nearby structures have been dated as 11,000 to 14,000 years old, and the observatory may well be of a similar age.

The arrangement combines what Hamacher calls an “egg-shaped” curve of stones with two straight lines. Collectively, these align with the setting Sun at the solstices and equinoxes.

The placement of the stones at Wurdi Youang and the positions where the Sun sets at the solstices and equinoxes. Norris et al/Rock Art Research

Traditional knowledge of the uses of the observatory, and possibly even of its existence, was lost when the Indigenous people of the area were murdered or displaced in the 19th century. The existence of the stones was brought to light in a review of stone alignments in the 1970s.

However, in a second round of forgetting, many documents related to the site were put in a mislabeled box, which has only just been rediscovered. Hamacher is excited about what he may find in this “treasure trove”, possibly including interviews with traditional elders.

Hamacher published a paper on Wurdi Youang four years ago, but the recent discovery of the remains of buildings and agriculture almost on the stones' doorstep, taking advantage of the nearby permanent water, has renewed his interest.

He told IFLScience that the placement of the stones might be dated either through thermoluminescence, which can reveal how long soil beneath has been shielded from cosmic rays, or by dating organic matter trapped under the stones. “We're sending a team out there to see what is possible and then talk with elders of the Wathaurong people to see what they will permit,” he said.

The name Wurdi Youang actually belongs to the highest hill in the nearby You Yang range. Hamacher said that the original Indigenous name for the observatory itself is unknown. The exact location has been kept secret to prevent vandalism, such as recently occurred to Indigenous paintings.

Western Victoria has provided most of continental Australia's evidence for permanent architecture, including sophisticated traps for eel farming dating back 8,000 years. Hamacher told IFLScience that it is not known whether the area was unique in this way, or if similar sites remain unfound. Many more stone arrangements are known across Victoria, but Wurdi Youang's astronomical alignment is unique. 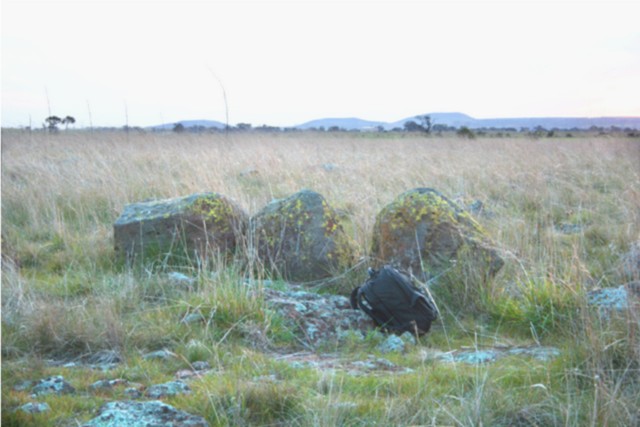 Some of the stones, with a backpack for size comparison. Ray Norris via Wikimedia Commons