Another obstacle to a future powered by clean energy has been removed. A new assessment of the potential of America's rooftops for solar power shows that they can make a much larger contribution to electricity requirements than previously recognized.

Despite the economies of scale of California's huge solar power stations, there are advantages to placing solar panels on building roofs. Transmission costs are lower, grid stability higher, and the environmental problems associated with wilderness constructions disappear.

However, there is only so much roofing space to go around, and much of it is shaded by trees or other buildings.

In 2008, a study by the National Renewable Energy Laboratory (NREL) of the U.S. Energy Department concluded that there was enough unshaded space on buildings in the U.S. to install 664 gigawatts of capacity. Allowing for variations in sunlight at these locations, this could produce 800 terawatt-hours each year.

This is a huge amount of electricity, but still barely a fifth of what Americans consume. Even if problems of storing energy for nighttime and cloudy days can be solved, rooftop solar looked like being only a modest part of the solution.

Now, however, NREL has updated its work and concluded the potential is almost twice as high as previously thought. The new report estimates a capacity of 1,118 gigawatts, producing 1,432 terawatt-hours a year.

This amounts to 39 percent of current electricity sales.

“Previous estimates at the regional and national levels have lacked a rigorous foundation in geospatial data and statistical analysis,” according to the study. To correct this, NREL researchers used satellites and light detection and ranging (LiDAR) technology. They scanned the structures making up 128 cities and extrapolated to the other 77 percent of American buildings.

Only 26 percent of the roof space of small buildings, mostly houses, is suited to covering with panels. On the other hand, 83 percent had enough unshaded, south-facing space to make it worth putting photovoltaics (PV) on at least part of their roof. Together these modest sized patches represent a vast amount of territory waiting to be put to use, with almost twice the combined capacity of medium-sized and large buildings. 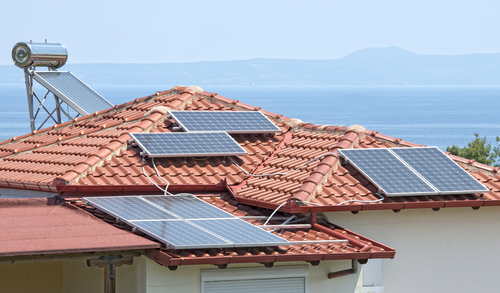 Even where much of a roof is unsuitable, some areas can usually support solar. Roy Pederson/Shutterstock

Not surprisingly there is plenty of variation by region, with California in a position to draw 74 percent of its electricity from rooftop solar. The figure is just 27 percent in Washington State.

The calculations assume 16 percent average module efficiency, something comfortably exceeded in the lab and likely to not last long commercially. "Actual generation from PV in urban areas could exceed these estimates by installing systems on less suitable roof space, by mounting PV on canopies over open spaces such as parking lots, or by integrating PV into building facades,” said Robert Margolis, one of the report's authors, in a statement.

Although Europe would almost certainly come off worse in an equivalent global analysis, most of the world is even better positioned to draw much of our power from the space above our heads.