People are dying younger in the US than the previous year for the first time in over two decades, according to a new report from the National Center for Health Statistics. The study is based on 2,712,630 death certificates from 2015, which is also 86,212 more deaths than 2014.

The latest figures show that life expectancy for the US population in 2015 was 78.8 years, down from 78.9 in 2014. A decrease of 0.1 years might not seem like a lot, but it breaks the more-or-less constant increase since the 1970s. The last year there was a decline was 1993, at the height of AIDS-related deaths and the year of a nasty influenza outbreak.

“I think we should be very concerned. This is singular. This doesn’t happen,” economist Anne Case, who specializes in health policy and healthcare, told the Washington Post.

Breaking it down into different populations, the age-adjusted death rate increased for white males, white females, and black males. Overall, men and women both witnessed a drop in life expectancy. There was additionally a slight rise in accidental infant deaths. 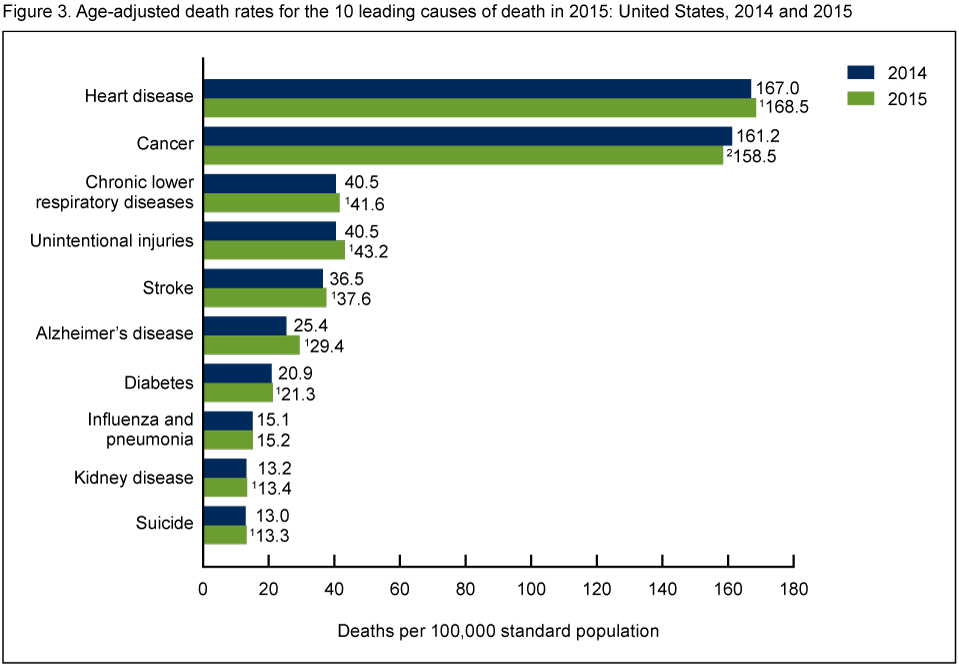 So what’s behind this decline?

It isn’t completely clear, but the researchers are pointing towards poverty and painkillers. Eight of the top 10 major causes of death were also on the rise, including heart disease, strokes, diabetes, and suicide.

They found that the largest increases in causes of death were down to unintentional injury (up 6.7 percent), which include overdoses from drugs and alcohol, and Alzheimer’s disease (up 15.7 percent).

"The dramatic upswing in the use of opiates and narcotic use across our country is potentially a big factor in driving a phenomenon like accidental injury. Accidental injury really relates to social stressor," lead author Dr Jiaquan Xu told AFP. The rise of deaths related to Alzheimer's could be due to more accurate diagnoses.

There was some good news amongst the otherwise dreary reading.

Deaths caused by cancer were down 1.7 percent from 2014. Outside of this report, it’s been found that cancer cases are rising but the cancer death rate has been steadily declining for over two decades, thanks to advances in biomedical science and wider public awareness.

It all sounds like scary stuff. But although it highlights some concerning issues, the researchers wanted to relay that the figures do not necessarily spell a long-term trend.

“One year does not form a trend... If you look back to 1993, it decreased but hasn’t decreased again (until now). Hopefully, that’s what we’re seeing here,” Xu told CNN.