Scientists at Harvard have created a new type of battery that they say could last more than a decade, with very little degradation. If it comes to fruition, it could be a game-changer in storing energy produced by renewable sources.

Published in ACS Energy Letters and led by Michael Aziz and Roy Gordon, the research describes something called a redox flow battery. This is a method of storing charge in tanks of liquid, so while it won’t be powering your smartphone any time soon, it could be revolutionary for powering homes and other areas.

“This approach may provide the decadal lifetimes that enable organic/organometallic redox flow batteries to be cost-effective for grid-scale electricity storage, thereby enabling massive penetration of intermittent renewable electricity,” the authors wrote in their paper.

One major problem with renewable energy is our methods of storing it aren’t great. As energy is created by things like wind farms and solar panels, it is usually sent straight to the electricity grid, but it also needs to be stored when the energy isn’t being consumed immediately.

While tried and tested, lithium-ion batteries suffer from limited lifespans, as well as being rather costly. For this reason, alternatives have been sought – and the flow battery is one contender to the throne.

A flow battery basically works by having two large tanks of a liquid solution. These store charge in the form of positive and negative liquid electrolytes, and when the two solutions flow next to each other, they generate power. 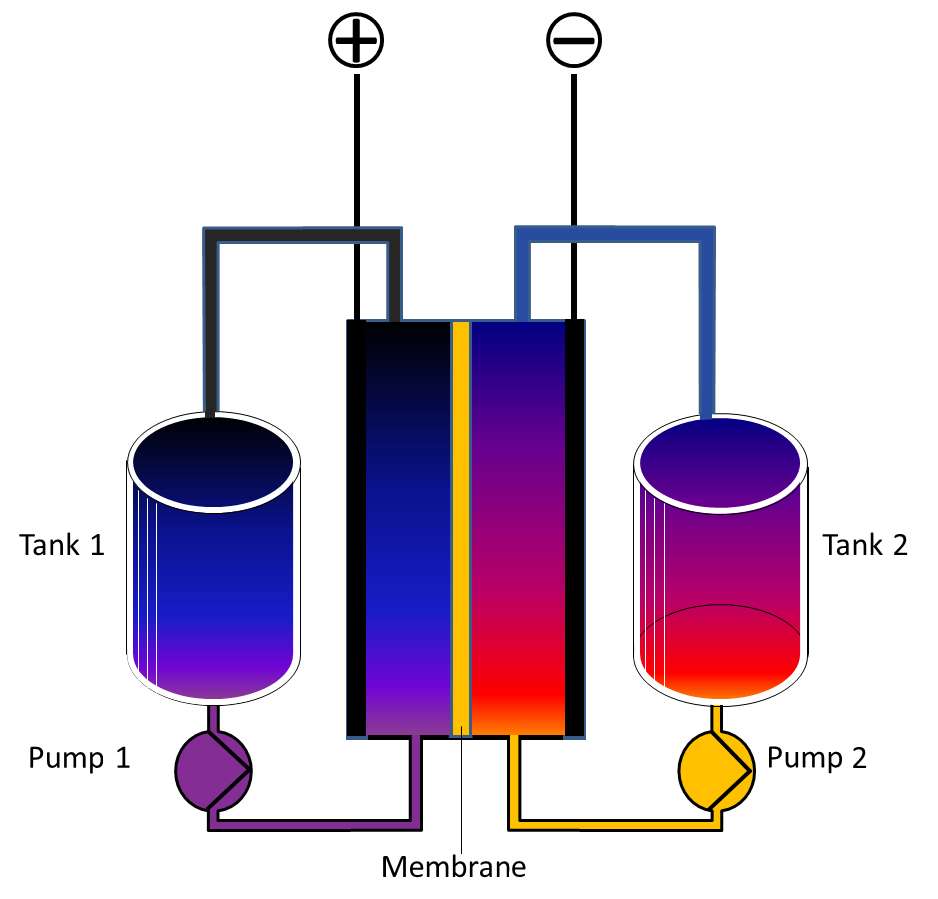 Diagram of a typical flow battery. Nick B, benboy00

But flow batteries have their problems too, notably that the molecules in the solutions often degrade. So the team from Harvard’s John A. Paulson School of Engineering and Applied Sciences (SEAS) came up with two ideas using organic molecules dissolved in neutral pH water.

First, they modified the molecular structure of something called viologen, used in the negative electrolyte solution, which acts as a good charge carrier. This made it more resilient.

In the positive electrolyte solution, they used a molecule called ferrocene, which is well known for its electrochemical properties. While great for storing charge, it’s insoluble in water, so the team modified its molecular structure too to make it soluble.

The result? Their battery lost just 1 percent of its capacity per 1,000 cycles of charging and discharging. Lithium ion batteries, meanwhile, cannot survive this number of cycles.

Making this cost effective will be the key next step. Aziz added to IFLScience that they would be tweaking the molecules further in the future to increase voltage, and figure out how to inexpensively mass produce these chemicals.

The US Department of Energy is aiming to get a battery that can store energy at $100 per kilowatt hour, a reduction of almost 90 percent of current costs. If this can be achieved, renewables will become a whole lot more attractive – if the prospect of halting climate change wasn’t already a good enough incentive.

"If you can get anywhere near this cost target then you change the world," said Aziz. "It becomes cost effective to put batteries in so many places. This research puts us one step closer to reaching that target."