Last night astronomers were able to detect a supernova in Messier 82 (M82), approximately 12 million light-years away from Earth. This might not sound too exciting, but this supernova, named PSN J09554214+6940260, just happens to be incredibly close and has the potential to provide tons of information about hard-to-study dark energy.  Steve Fossey of University College London appears to be the first to announce the discovery with several astronomers around the globe quickly confirming the sighting.

The supernova is classified as a Type Ia. Before the star exploded, it was a white dwarf star in a binary system. While the star was about the size of Earth, it had a mass similar to our sun. Gravity caused it to take on more and more mass from hydrogen gas that it stole from its companion star.

Eventually, the ever-growing white dwarf reaches the Chandrasekhar limit of about 1.38 solar masses and collapses in on itself, creating an incredible explosion called carbon detonation. This runaway fusion reaction generates a mind-boggling amount of energy, estimated to be 1-2 x1044 Joules and will be about 5 billion times brighter than the sun. There is also a chance that the supernova was caused by the collision of two white dwarfs, but astronomers have not been able to determine the cause of the explosion quite yet.

The incredible show isn’t the only thing that has astronomers excited about this supernova: there is potential for astronomers to study dark energy because of this explosion. Dark energy is the “vacuum energy” that is thought to be accelerating the expansion of the universe. Gravitational forces would likely bring galaxies closer, but they are accelerating away, and at an ever-increasing pace. Dark energy is thought to be the force at work. Because dark energy cannot be observed directly, astronomers must use something with a known brightness (called a standard candle) in order to see evidence of its existence. By monitoring the supernova over time, astronomers can observe the change in redshift to determine how quickly our galaxies are running away from one another.

Neutrinos, weakly interacting subatomic particles, are created from nuclear reactions, just like the ones created by a supernova. Neutrinos can be generated by Type Ia supernovae (though Type II is much better) but unfortunately M82 is too far away and the physicists at the IceCube Neutrino Observatory would not be able to determine which, if any, neutrinos they encounter originated from the nova.

If you live in an area that is clear and dark enough to see the stars, be sure to look up and check out the show. It can be seen anywhere from the northern hemisphere with a good pair of binoculars or an amateur telescope. M82 is in the northwestern region of Ursa Major, right above the "head" of the bear. Trace from the head to the isosceles triangle of stars. Northeast of the triangle you will find the star 24 Ursae Majoris with a magnitude of 4.5. M82 is about two degrees southeast of this star. It is pretty bright right now and has the potential to become even more luminous in the night sky. 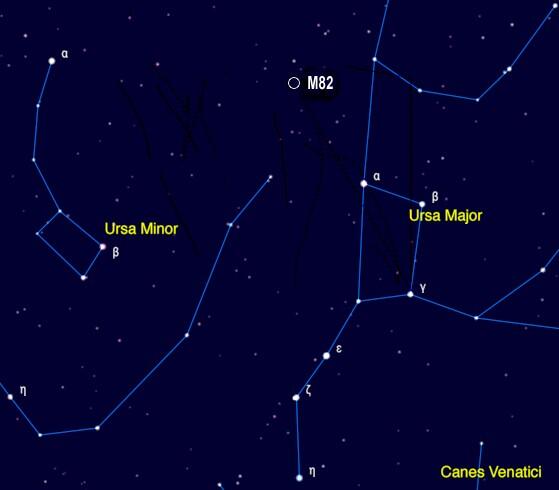 Location of M82 in relation to Ursa Major. Credit: Skymania

Before and after shots of M82. Shorter exposure time on the "after" shot causes it to be blurrier. Credit: E. Guido, N. Howes, M. Nicolini

Quantum Communication Could Be The Best Way To Communicate With Aliens

New Molecular Bond Discovered By Physicists Is Longer Than Some Bacteria