3D printing has been around for a couple of decades, but only in recent years has it really exploded as a technology. From printing out destroyed archaeological ruins to replicating the structures of the human heart, its possibilities seem to be truly endless.

Now, thousands of years after he bit the dust, Ötzi – everyone’s favorite Copper Age mummy – is finally able to leave his resting place, thanks to the same technology: Three 3D printed models of the iceman, meticulously crafted by an international team, are about to tour the United States.

Two of the replicas will be used for educational purposes at the Cold Spring Harbor DNA Learning Center in New York. The third is currently housed in the South Tyrol Museum of Archaeology in Bolzano, Italy, where the original Ötzi resides in a frozen crypt. In 2017, it will be sent to the North Carolina Museum of Natural Science on the first stop of a national tour.

The medical-grade models were commissioned in order to allow researchers and interested parties around the world to examine the iceman, who cannot be regularly taken out of his frigid resting place for fears he may be contaminated or damaged.

First off, Ötzi was turned into a virtual entity using thousands of individual CT scans, an X-ray imaging technique. Most of his body was successfully printed out shortly afterwards, but some skeletal segments, like a few ribs, are permanently missing, so the printing team at Materialise painstakingly replicated these by mirroring parts that were still preserved on the original body. Other segments here and there were only revealed to be missing when the models began to take shape.

“When I tried putting him back together from the scanned slices, the pieces didn’t seem to match,” said project engineer Eric Renteria, as reported by 3ders. “So I did some research and found his total height and compared that to the total height of all the pieces I had reconstructed. Once I saw that there was a mismatch, I moved his head piece into the correct spatial location, which revealed that there was a gap missing.”

Replicating the hands proved to be the most troublesome part of the procedure as the CT scan could not accurately map them out; the team had no other choice but to gradually construct them by hand using only visual cues. Once completely assembled, the entire Ötzi replicas were then carefully hand-painted by U.S. artist Gary Staab. The final models are nothing short of lifelike.

Ötzi was killed at the age of 45 by an arrow, which punctured his left shoulder, as he stood on an Austrian-Italian mountaintop around 5,300 years ago. Fortunately for researchers, the 1.6-meter-high (5.2-foot-tall) tattoo-covered gentleman was preserved across millennia by glacial ice.

When he was discovered in 1991, he was still so intact and well preserved that scientists could even tell his last meal consisted of venison and ibex. Unfortunately, he wasn’t the healthiest of people: He was lactose intolerant, arthritic, experienced severe gum disease and, worse of all, riddled with parasites. 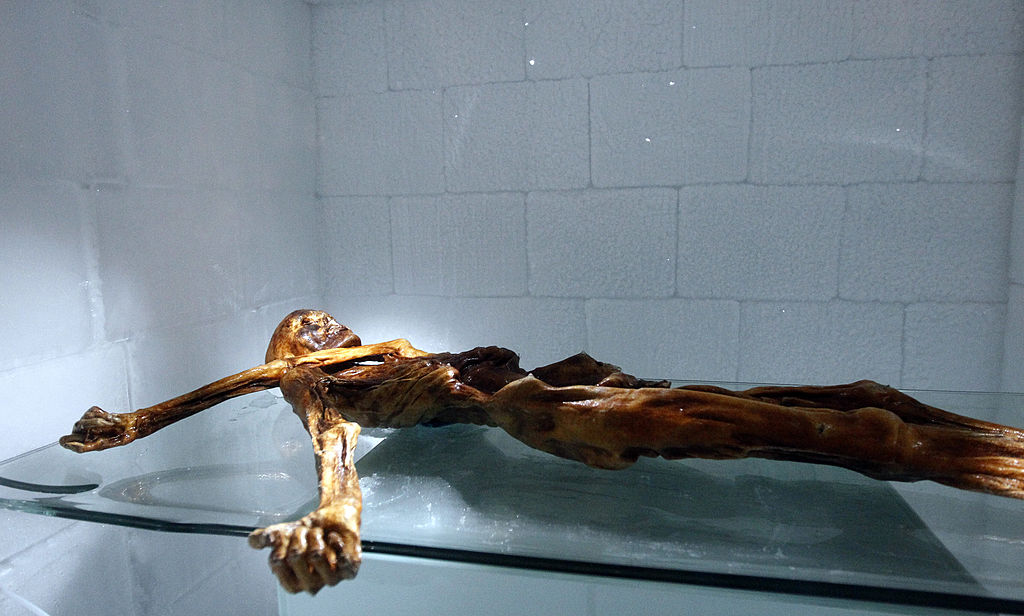 Even today, this ancient murder victim is providing us with reams of data, including the fact that his maternal line, as traced through his mitochondrial DNA, is no longer in existence.