Update: We mistakenly reported that the pro-STEM bills signed by Trump were Executive Orders. In fact, they were Congressional bills, and this has now been corrected.

President Trump is infamous for his treatment of women, and we at IFLScience have made it no secret we find his administration’s attitude towards science is one of near-total disdain. That’s why, when the Commander-in-Chief recently added his signature to two bills in the Oval Office – bills designed to recruit more women into science, technology, engineering, and mathematics (STEM) jobs – it came as quite a welcome surprise.

As per the first bill, HR 321, NASA must actively ramp up its attempts to recruit and encourage more young women into taking up STEM careers. NASA will also be required to report to Congressional committees with regards to how much progress it is making on this issue.

The second bill, HR 255, authorizes the National Science Foundation (NSF), the source of nearly a quarter of all federally supported scientific research, to boost its recruitment efforts. Women graduating in STEM subjects will be aided in taking up STEM careers in the worlds of both academia and industry.

Although the fine details of the bills are somewhat lacking – it’s not clear what “encouraging” means in practical terms – it’s hard to disagree with the President signing off on these, which were given bipartisan support in Congress. However, things are not as benevolent as they seem.

During the signing ceremony at the Oval Office Trump said it was unfair that only 1 in 4 women with a degree in one of these fields ends up working in them.

This likely refers to the results of a US census back in 2012, which notes that just 25 percent of both men and women with a bachelor's in a STEM subject find work in a STEM field, a problem linked to the lack of funding and career support for science in general. The figure for women alone was actually closer to 1 in 7 – far worse than Trump’s team have made out. 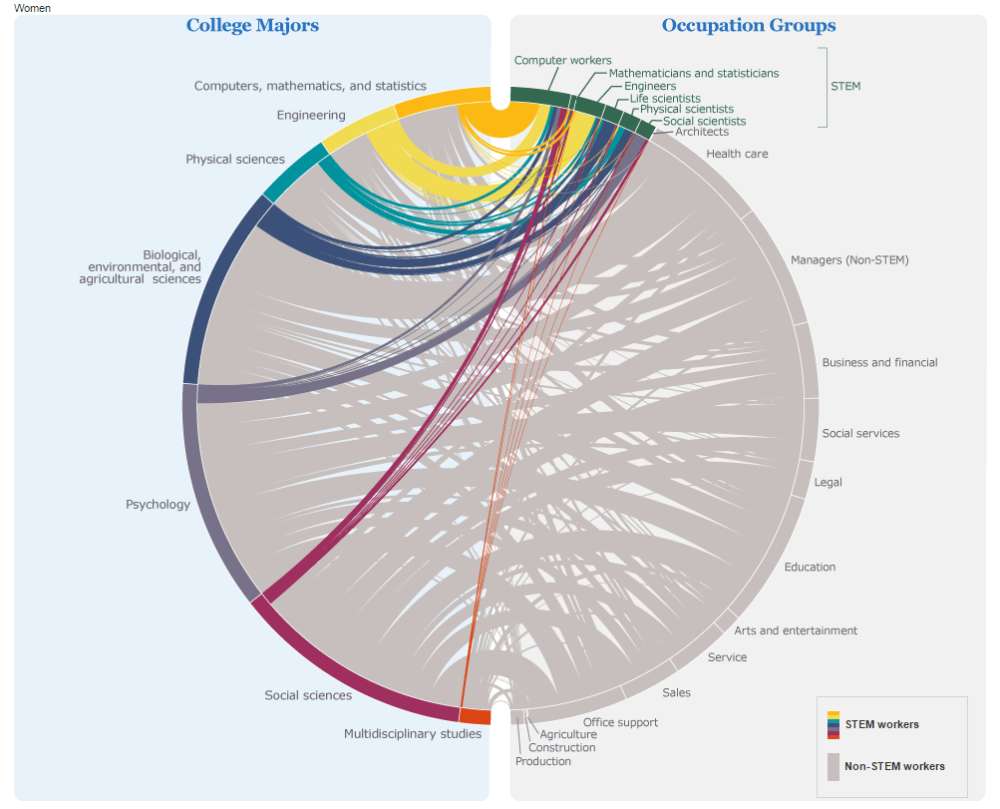 Just 1 in 7 women with STEM degrees go into STEM fields. US Census

This depressing statistic isn’t just down to the well-documented recruiting bias against women in STEM fields – it goes back to education, and how, from a very young age, most girls aren’t raised to think that they are just as able to become scientists as men are. It’s not clear that the new Education Secretary, someone who has no experience working in schools whatsoever, has any plans to address this issue.

Mind you, it’s not ever been clear that Trump himself knows much about women in STEM. Back in 2016, when questioned on the subject, he dismissively said: “there are a host of STEM programs already in existence.”

And then, of course, there’s the Trump administration’s anti-science agenda. From a Cabinet stuffed with climate change deniers to enormous budget cuts to federal science research programs – including a 24 percent cut to the beleaguered Environmental Protection Agency’s (EPA) budget – these Congressional bills have cropped up at a strange time in the American political discourse.

There’s something decidedly paradoxical about encouraging women to take up STEM careers when it looks like there won’t be many left by the time they graduate. Science needs funding, plain and simple, but every action taken by the resurgent Republican Party in 2017 amounts to nothing less than trampling on so much of America’s scientific legacy.

With this in mind, it’s worth pointing out that as the pro-STEM bills were signed, Trump also added his signature to one of his own Executive Orders, one that aims to “review” the way public waterways are protected from pollution under the EPA’s Clean Water Rule.

This act essentially ensures over 110 million Americans have safe drinking water, and it’s backed by hard-and-fast science. This order seeks to weaken it just so fossil fuel companies can get away with a little more fracking and a little less regulation.

So yes, the signing of the STEM bills are a good thing – but the wider picture confirms that Trump is far more of a threat to science than he is a friend to it.