The opening ceremony for the upcoming 2014 World Cup promises to be one to remember as, according to AFP News, a paraplegic individual will walk onto the pitch and give the first kick, all thanks to an Iron Man style bodysuit controlled by his brain.

The event, which takes place on Thursday 12 in Sao Paulo, Brazil, will unveil for the first time the exoskeleton which is the result of years of work by a dedicated team of 156 scientists from across the globe.

Leading the research is Brazilian neuroscientist Miguel Nicolelis who first dreamt up the idea for the exoskeleton back in 2002. His ultimate goal is to allow paralyzed individuals to walk again, but he also wants to showcase his invention to the world to prove that Brazil is investing in things beyond football.

“Doing a demonstration in a stadium is something very much outside our routine in robotics. It’s never been done before,” Nicoleilis told AFP.

The futuristic, albeit pretty bulky, bodysuit will not only allow the individual, whose identity is currently a secret, to walk and kick the wall but they will also be able to experience the sensation of touch thanks to electronic circuits which relay signals back to the brain via an artificial skin.

“It’s the first time an exoskeleton has been controlled by brain activity and offered feedback to the patients,” said Nicoleilis. 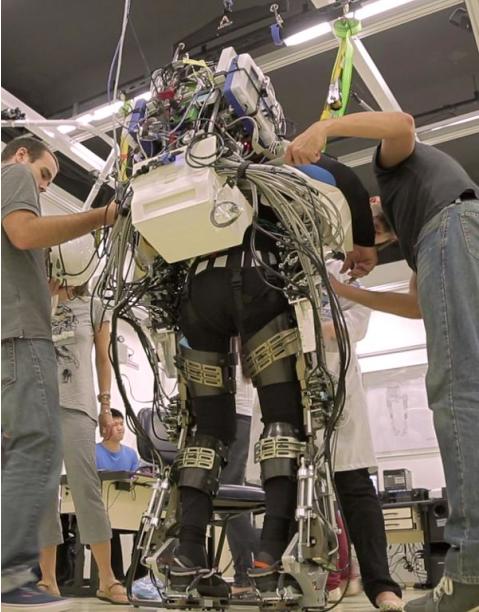 To get this far, the team has released over 200 scientific publications and conducted a myriad of rigorous clinical tests.  Although the research has certainly been exhausting, Nicoleilis recalls how rewarding it was when a paralyzed individual tried on the suit back in April and took their first steps.

The suit has been named BRA-Santos Dumont after Brazil and an aviation pioneer/national hero called Alberto Santos-Dumont who is referred to as the “Father of Aviation” in Brazil.

Unfortunately, the research has been met with criticism as some believe that the suit is far from practical and that he is receiving too much of the Brazilian government’s research budget, but Nicoleilis defends his work. “The funding is the same with or without the World Cup. We’ve received $14 million from the Brazilian government over the last two years. That’s approximately four or five times less than what the United States government invests in a mechanical arm,” he told AFP.

Practicality issues aside, the invention is impressive and the demonstration will certainly be a momentous occasion, highlighting what is possible with today's technology and scientific knowledge.