To Jesse Karmazin, blood is a drug.

His startup, a company called Ambrosia based in Monterey, California, is currently enrolling people in the first US clinical trial designed to find out what happens when the veins of adults are filled with the blood of young people.

In many ways, he's right about blood's life-saving qualities. A simple blood transfusion, which involves hooking up an IV and pumping the plasma of a healthy person into the veins of someone who's undergone surgery or been in a car crash, for example, is one of the safest life-saving procedures we have. Every year in the US, nurses perform about 14.6 million of them, which means about 40,000 blood transfusions happen on any given day.

But Karmazin, who has a medical degree but is not licensed to practice medicine, wants to take the idea of blood as a drug to a different level — he wants to use transfusions to fight aging.

As a medical student at Stanford and an intern at the National Institute on Aging, Karmazin watched dozens of the procedures performed safely, he said on a recent phone call.

"Some patients got young blood and others got older blood, and I was able to do some statistics on it, and the results looked really awesome," Karmazin told Business Insider. "And I thought, this is the kind of therapy that I'd want to be available to me."

So far, though, no one knows if blood transfusions can be reliably linked to a single health benefit in people. And researchers doubt Karmazin's trial will come away with sufficient evidence to point us in that direction.

"There's just no clinical evidence [that the treatment will be beneficial], and you're basically abusing people's trust and the public excitement around this," Stanford University neuroscientist Tony Wyss-Coray, who led a 2014 study of young plasma in mice, recently told Science magazine.

For starters, to participate in the trial, you have to pay. And it isn't cheap. The procedure, which involves getting 1.5 liters of plasma from a donor between the ages of 16 and 25 over the course of two days, costs $8,000. 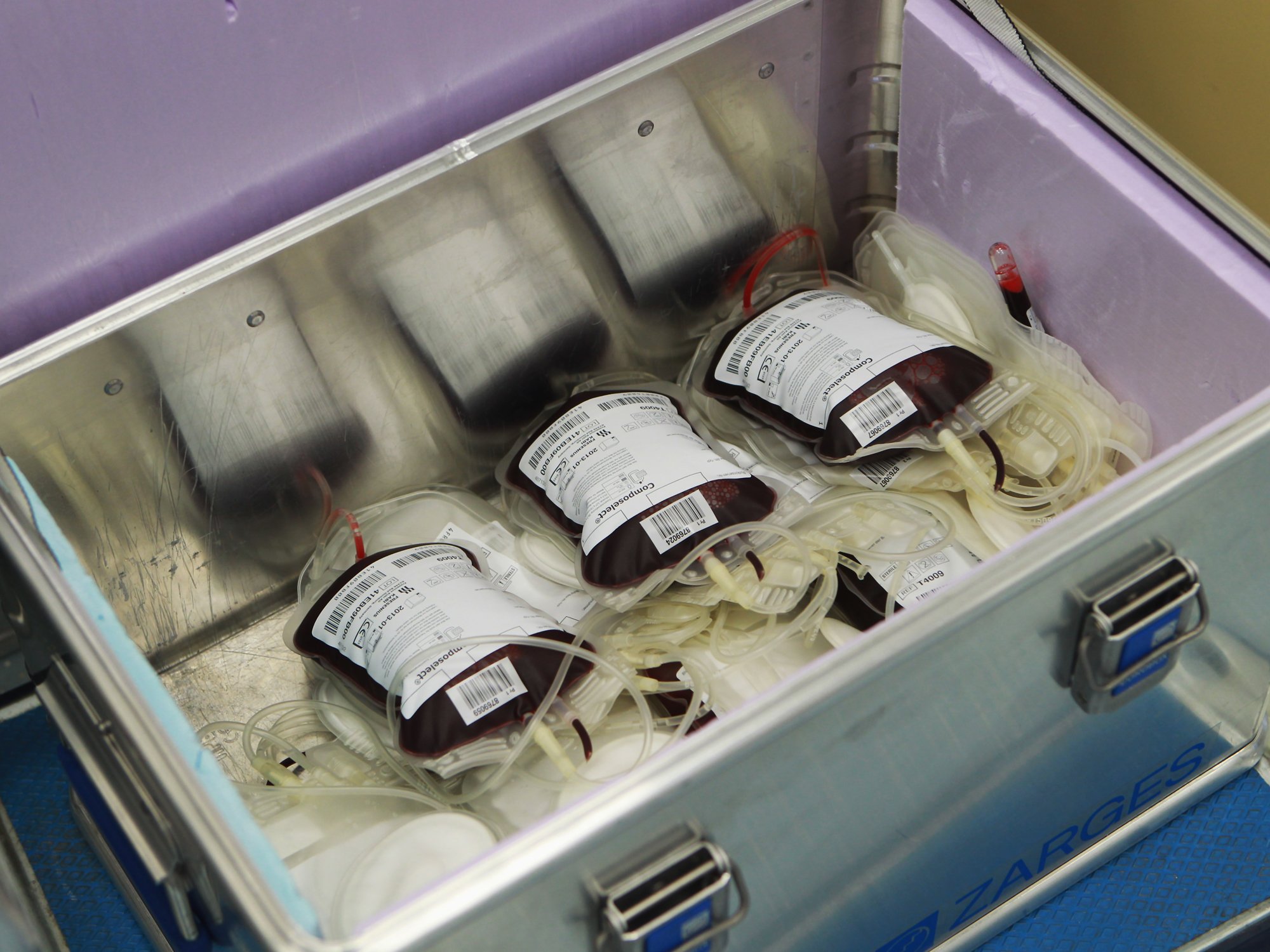 According to the description on ClinicalTrials.gov, Karmazin hopes to enroll 600 people in his trial, which he is conducting with physician David Wright, who owns a private intravenous-therapy center in Monterey. Before and after the infusion, participants' blood will be tested for "biomarkers," a variety of measurable biological substances and processes that are thought to provide a snapshot of health and disease.

So far, Karmazin says he has done the procedure on 30 people. He says many of them are already seeing benefits, including renewed focus and improved appearance and muscle tone.

But it's far too early to say if any of these claims are true. For one thing, when all the data is pooled and tested, it could end up being statistically insignificant. For another, the supposed benefits could amount to a placebo effect — simply going to a fancy lab in Monterey and paying to enroll in the study could have made patients feel better.

Whether or not the blood itself had any effect on a patient's health is still up in the air, and some researchers believe the evidence actually points the other direction.

Nevertheless, Karmazin, who was initially inspired by studies on mice, remains enthusiastically hopeful.

"I'm really happy with the results we're seeing," he said.

Studies in mice don't necessarily translate to results in people
Karmazin's leading motivation was a series of mouse studies that involve parabiosis, a 150-year-old surgical technique that connects the veins of two living animals. (The word comes from the Greek words para, or "beside," and bio, or "life.")

Irina Conboy, a bioengineering professor at the University of California at Berkeley who pioneered one of these parabiosis studies in mice in 2005, found evidence that the exchange had done something positive for the health of the older mouse who received the blood of the younger mouse. But the animals weren't simply swapping blood — the older rodent was also reaping the benefits of the younger one's more vibrant internal organs, circulatory system, etc. In other words, the researchers couldn't say for sure whether it was the blood itself that was doing the apparent reviving or if the fact that the animals were linked in other ways was responsible.

So last year Conboy and her team ran another study to see what would happen if they merely exchanged the rodents' blood without connecting their bodies in any way. And they found that while the muscle tissue in the older mice appeared to benefit slightly from the younger blood — they still couldn't say for sure that these modest benefits were coming from the young blood itself. Afterall, their experiment had also fundamentally changed the older mouse blood in another way: They'd diluted it.

"The effects of young blood on old tissue seems to be rejuvenating; however, there is no concrete evidence that young blood is what is causing the change in results. It may very well be the dilution of old blood," Ranveer Gathwala, a UC Berkeley bioengineer in Conboy's lab who co-authored the 2016 paper, told Business Insider in an email.

More importantly, the same study suggested that while the benefits of young blood on older mice were fairly borderline, the damage caused to the younger mice by the older blood was more measurable — and perhaps far more important.

In the younger mice who got older blood, every organ system declined. The researchers saw the most dramatic effects in brain cell development.

Nevertheless, other researchers went forward with parabiosis studies in mice. One such study, co-authored in 2014 by Wyss-Coray, suggested that parabiosis could rejuvenate a part of the mouse brain where memories are made and stored.

"I think it is rejuvenation," Wyss-Coray told Nature in 2015. "We are restarting the aging clock."

In September 2015, Wyss-Coray's clinical trial in humans in California became the first to test the benefits of young plasma in 18 people with Alzheimer's, but those results have not yet been released. Some of the funding for that small trial came from a company that Wyss-Coray started, called Alkahest.

Other researchers on Wyss-Coray's team didn't come to such conclusions.

"We're not de-aging animals," Amy Wagers, a stem-cell researcher at Harvard University, told Nature in 2015. Instead of turning old tissues into young ones, Wagers said they were helping repair damage. "We're restoring function to tissues."

Now watch: Why we have different blood types and why they matter