Fossilized remains of Homo sapiens discovered at a cave site in southeastern Europe suggests that early humans expanded into the continent earlier than previously thought, potentially intermixing and influence resident Neanderthal populations before wiping them out entirely.

It is widely agreed upon that modern humans migrated to Europe around 45,000 years ago, replacing Neanderthals in their wake sometime between 39,000 and 50,000 years ago. But when they arrived and the role H. sapiens played in wiping out their early cousins has been greatly debated, in large part due to a lack of fossilized remains.

Bacho Kiro Cave in Bulgaria measures four stories and extends 3,600 meters (11,800 feet) through paleolithic galleries and corridors. The cave was first excavated in 1938 and is known for its distinctive layering of pendants, weaponry, and other ancient artifacts layered throughout its sediment. Excavations from the 1970s yielded fragments of human remains, which were subsequently lost. In 2015, researchers with the National Archaeological Institute with Museum in Sofia and the Department of Human Evolution at the Max Planck Institute for Evolutionary Anthropology returned to the site in an attempt to better illuminate the complicated story of our early ancestors. 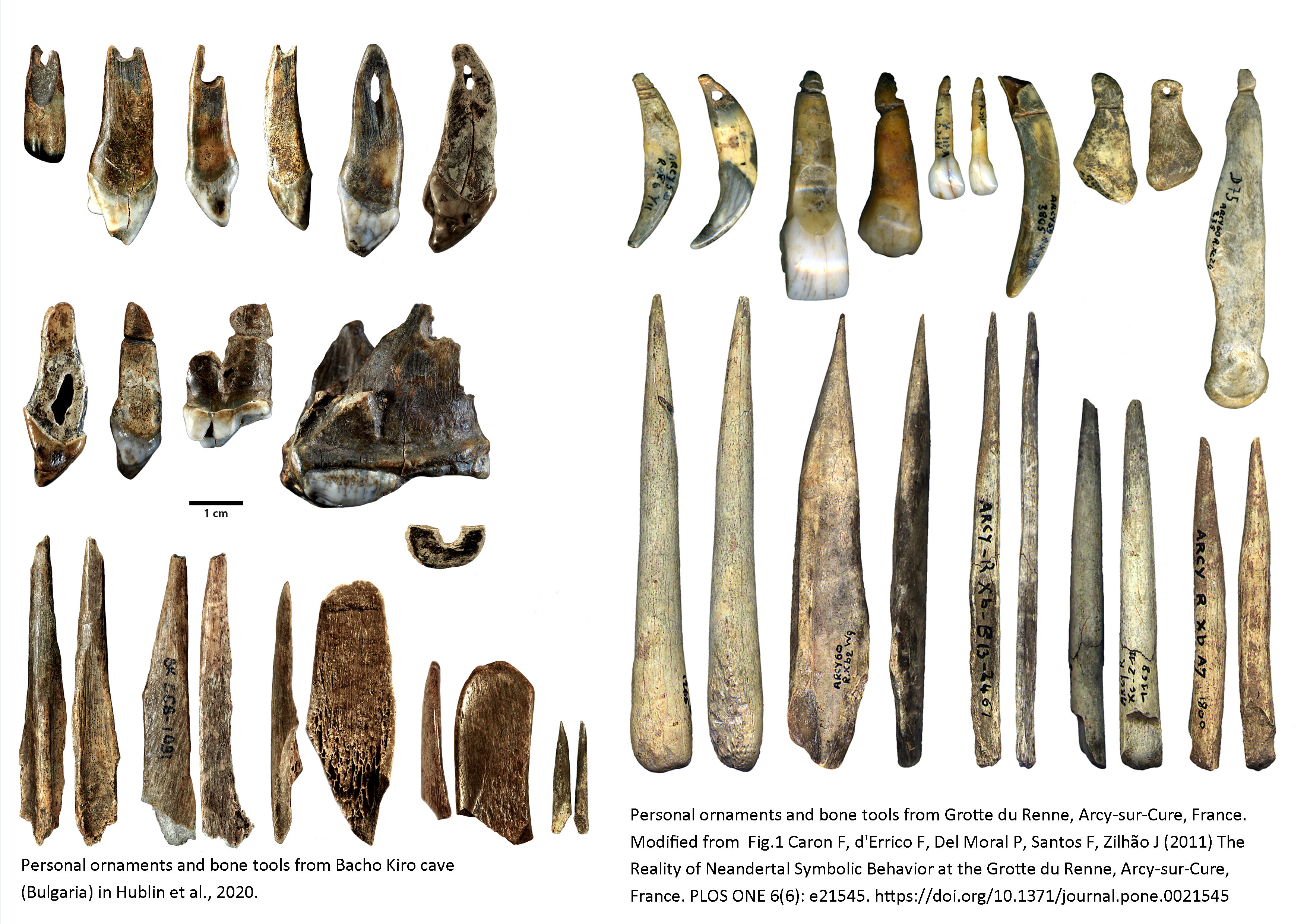 Two studies published in Nature and Nature Ecology & Evolution describe the oldest known instance of Homo sapiens dating to the Upper Paleolithic, an era predating the Stone Age between 12,000 and 50,000 years ago. The first of which describes hominin remains and artifacts newly discovered in the cave, including animal bones as well as a tooth and four human bones that DNA and protein analysis confirms belonged to H. sapiens. Collectively, the artifacts and remains produce a “robust, high-precision radiocarbon chronology for the site” that made possible an analysis of the stratigraphy, or the many sediment layers found at the cave.

Around 14,000 bones and 2,000 lithics were excavated – an “exceptionally high artifact density” that radiocarbon dating suggests date back to around 44,000 and 47,000 years old. DNA extracted from collagen within the bones supports the same timeframe of roughly between 42,000 and 45,000 years old.

“In addition to changes in typology and technology from flakes to blades, this transition is marked by a shift in raw material use, from coarser syenite porphyry to fine-grained flint,” write the authors. “To the best of our knowledge, this study represents one of the largest 14C datasets from a single Paleolithic site processed by one team,” note the authors, adding that the extensive dataset allows the team to securely place the dates.

A number of ornaments, tools, weapons, and a pendant made from bear teeth resemble those found in earlier sites associated with Neanderthals, suggesting interaction existed between the two groups before the latter’s eventual demise.

Together, the findings suggest that modern humans expanded into Eurasia before 45,000 years ago outcompeting Kent’s Cavern in the UK and Italy’s Cavallo Island for the earliest presence of our species in western Europe. During this time, it is likely that early humans overlapped with Neanderthals, potentially influencing and changing their behavior before replacing the species completely.

"The Initial Upper Paleolithic in Bacho Kiro Cave is the earliest known Upper Palaeolithic in Europe. It represents a new way of making stone tools and new sets of behavior including manufacturing personal ornaments that are a departure from what we know of Neanderthals up to this time,” said Tsenka Tsanova of the Department of Human Evolution at the Max Planck Institute for Evolutionary Anthropology in a statement.

“The Initial Upper Paleolithic probably has its origin in southwest Asia and soon after can be found from Bacho Kiro Cave in Bulgaria to sites in Mongolia as Homo sapiens rapidly dispersed across Eurasia and encountered, influenced, and eventually replaced existing archaic populations of Neanderthals and Denisovans.”

The authors note that “ongoing work in this area is crucial” to understanding timing of major events in hominin adaptations and demographic processes during this period in human history.