It's Thanksgiving weekend, aka that time of year when Americans are told to contemplate what they are most grateful for – in between mouthfuls of stuffing and sweet potato casserole, of course.

But if you find yourself in the middle of yet another heated family discussion – it is the holidays after all – it might help to remember that the vast majority of Americans rank family as the main source of meaning in life. At least, that is the conclusion of two separate surveys conducted by the Pew Research Center in 2017, which asked Americans across the country "What makes life meaningful?"

In both surveys, 69 percent of respondents said their family provided them with a great deal of meaning. More disappointingly, the results also suggest that Americans derive greater meaning from money than they do from friendships.

The first survey, conducted in September 2017, asked 4,867 adults on the American Trends Panel an open question, giving respondents the opportunity to describe what they feel makes life worthwhile and satisfying. After family, the majority described career (34 percent) and money (23 percent) as the greatest sources of meaning in their lives. 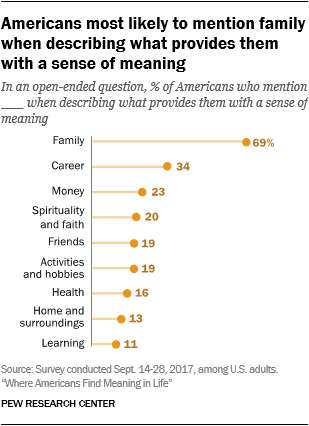 The second, conducted in December 2017, was closed-ended so the 4,729 respondents had to rate exactly how much meaning they receive from a pre-selected list of 15 possible sources, from religion to reading, on a scale of "none at all" to "a great deal". Family, once again, topped the list, followed by being outdoors (47 percent) and spending time with friends (47 percent). 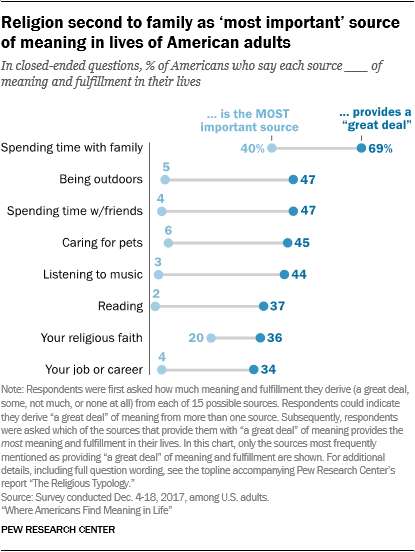 So, these results show that family is clearly a big deal but what other conclusions can we draw?

Unsurprisingly, evangelicals are more likely to find meaning in faith than atheists. Forty-three percent of evangelical Protestants mentioned religious topics in the open-ended question and 65 percent said it gave them "a great deal" of meaning in the closed-choice survey. In contrast, non-believers are more likely to mention finances (37 percent) and hobbies (32 percent) as sources of meaning, even when socioeconomic factors were accounted for.

Perhaps more surprising, those with higher levels of household income are more likely to list friendship, good health, stability, and travel as sources of meaning in their lives. In the open-ended survey, 25 percent of Americans on a $75,000 or higher salary mentioned friends compared to 14 percent of Americans on a $30,000 or lower salary. They were also more likely to mention good health (23 percent versus 10 percent). This, the researchers say, may be because they have more time to spend on activities like socializing and going to the gym.