At least one in seven people who voted for Donald Trump will reject the evidence of their own eyes in favor of endorsing the President's claims, according to a study by two political scientists. In order to make them public while the findings are most topical, the study has been reported in the Washington Post without going through peer review. Nevertheless, if the research stands up to scrutiny it marks a staggering demonstration of how far people will go to support their candidate over what is before their noses.

Hans Christian Andersen warned us in his story The Emperor's New Clothes of the extent to which people will bow to peer pressure rather than admitting what they see before them. Yet even Andersen might have been bemused by the work of Professor Brian Schaffner and Dr Samantha Luks, 180 years later.

Following Trump and his spokesman Sean Spicer's assertions that the crowd at the Trump inauguration was larger than that at President Obama's in 2009, comparative images of the National Mall during the two events circulated widely in social media and newspaper reports. Taken from almost the same angle, one shows the Mall almost entirely filled, while the other reveals abundant empty space. 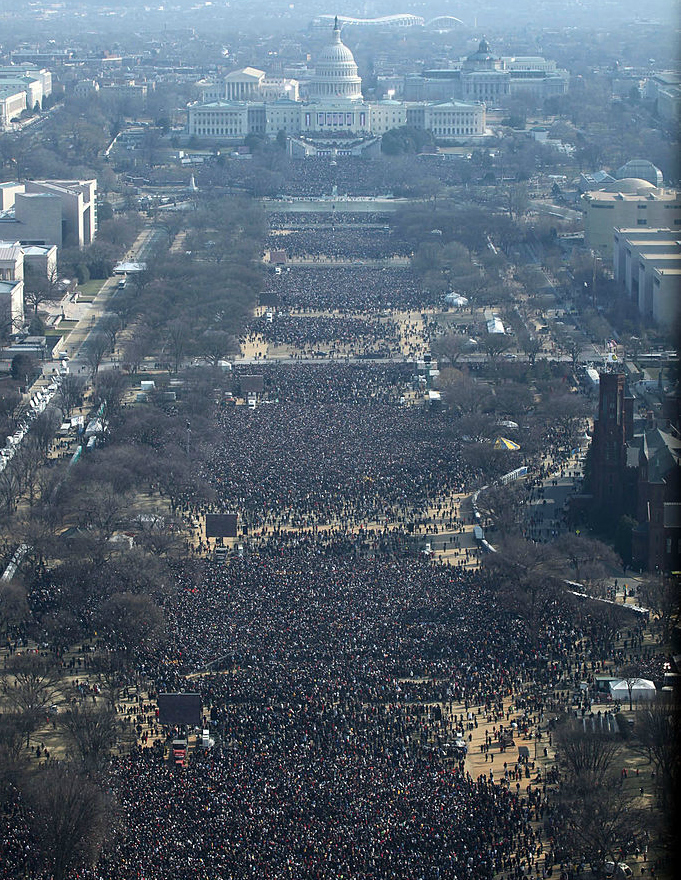 One of the images from Obama's 2009 inauguration that has been widely circulated, showing the scale of his crowd. David Stephenson/Getty Images

Schaffner, of the University of Massachusetts, and Luks, of the polling firm YouGov, collected a panel of 1,388 Americans and showed them the two images, labeled as Photo A and B, rather than identifying the respective events. However, by the time the study was done, two to three days after Trump's inauguration, many of those in the survey would already have seen the comparison.

Half the participants in the study were asked which photo was from 2009 and which from 2017. Almost eighty percent of non-voters got the answer right, presumably a reflection of having seen the photos already, or hearing that Obama had the bigger turnout. The number was 90 percent for Clinton supporters, but only 60 percent of Trump supporters picked the answers correctly. It is unsurprising that 40 percent of a group who had heard their candidate claims might make such a mistake.

More significantly, however, the other half of the participants were asked which image showed more people. Almost all the Clinton supporters and nonvoters did this accurately. On the other hand, 15 percent of people who had voted for Trump looked at all that white space and said the Trump photo had more people – without even being prompted that this was from their candidate's event.

In their Washington Post article, Schaffner and Luks wrote: “To many political psychologists, this exercise will be familiar. A growing body of research documents how fully Americans appear to hold biased positions about basic political facts. But scholars also debate whether partisans actually believe the misinformation and how many are knowingly giving the wrong answer to support their partisan team (a process called expressive responding).”

It is well known that people from all across the political spectrum can engage in what is known as “politically motivated reasoning”, where they accept and remember claims that suit their views and reject or forget those that don't. People have also been shown to become more favorable to a policy when told that their party or candidate supports it. However, the fact that everyone does it, doesn't mean it always happens to the same extent.

It's one thing to disregard something that only an expert in the field can verify through statistical analysis, another to dismiss what is in front of your eyes.

For people on the inauguration stage, Trump included, most of what they could have seen was the packed parts of the Mall, making the crowd look as large as that at any previous event. The photographs offered, on the other hand, couldn't be clearer. The work fits with studies suggesting that for many people being exposed to facts that contradict their views actually causes them to harden their position, rather than become more open-minded.

Perhaps the strangest aspect of all this is how little the crowd sizes mattered. Obama not only took Washington DC in a landslide, but won all the nearest states. Trump lost the area around the capital badly. The lower turnout for his event could as easily have reflected the greater distance his supporters needed to travel as lower enthusiasm. Perhaps this was what most of the Trump supporters in the survey were thinking, while others may not have been aware of which photograph was which, or simply didn't care who had the bigger turnout.

Yet one in every seven Trump voters were so passionate about the topic they were literally willing to say white is black (or at least multicolored). The work suggests there are may be no facts that could change this subgroup's minds, raising the question whether anything can.