The Great Pyramid of Giza often gets the crown when talking about pyramids. But not far from Puebla City in Mexico, there’s a hidden temple that both towers over the Egyptian pyramids while also telling a fascinating story about the Spanish conquest of the Americas.

The Great Pyramid of Cholula, known to the locals as Tlachihualtepetl (man-made mountain), stands around 66 meters (216 feet) tall and 450 meters (1,475 feet) wide. It has a volume nearly twice the size of the Great Pyramid, the largest of the three famous pyramids of Giza. Although archaeologists can’t agree who built the mysterious complex, it’s believed to have been constructed at some point around 300 BCE.

As Zaria Gorvett reports for BBC Future, the story goes that the Aztec city of Cholula was ravaged by Spanish invaders in October 1519. The invasion killed 10 percent of the city's population, while much of the city was looted and burnt.  As a symbol of Spanish dominance and the arrival of Christianity, the Spaniards constructed "Iglesia de Nuestra Señora de los Remediosa", a Catholic parish church, on top of the city’s largest hill. At least, they thought it was a hill. 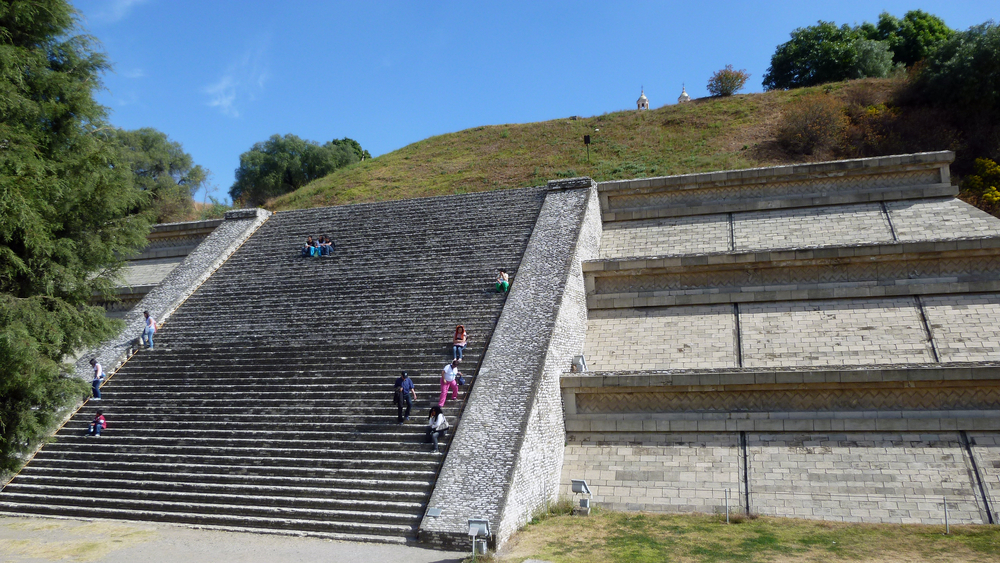 Tourists climbing the steps at the base of the Great Pyramid of Cholula, give an insight into its scale. Fabio Imhoff/Shutterstock

What looked like a giant mound of earth and grass was actually a colossal pyramid. In fact, according to reports, it is the largest monument ever built. Legend has it that the locals covered the monument with soil themselves when they heard about the Spanish invaders sweeping through the Americas.

However, the truth is more likely to do with the mud bricks. The humid environment of Mexico means that mud bricks can retain moisture and not dry out for years. This allows them to be a fertile environment for the tropical plant life to crawl up, around, and take over. This process means it was quickly covered by grass and plants, forcing them to abandon the temple.

As David Carballo, an archaeologist at Boston University, explained to BBC Future: “It was abandoned sometime in the 7th or 8th century CE. The Choluteca had a newer pyramid-temple located nearby, which the Spaniards destroyed.”

For now, the Tlachihualtepetl remains buried in the hill, just as it has for centuries. But now, its only inhabitants are the swarms of tourists, archaeologists, and curious travelers stomping around its miles and miles of excavated tunnels.