Apparently, most people think those that swear and curse and turn their air blue on a regular basis are untrustworthy. This always seemed like a strange connection to make, as if swearing somehow is equivalent to spouting prevarications. I hate to think what people subscribing to this theory think of our own site.

Evidence is beginning to surface, however, that the very opposite is true, and that sweary types are actually often more honest than their courteous counterparts. Now, a brand new study set to be published in the journal Social Psychological and Personality Science seems to back up this point – while revealing where the most curse-prone (and thereby honest) people in the US are.

As it turns out, those in Connecticut and New Jersey are the most prolific swearers, while those in Georgia, South Dakota, and Wyoming are the least likely to make your elderly relatives blush.

The swearing prevalence was calculated by looking at nearly 74,000 Facebook statuses of people from every single US state – simple enough. However, in order to link this to trustworthiness, the team needed to look to the State Integrity Investigation of 2012.

That’s right: Back in 2012, there was an enormous nationwide trustworthiness survey that ranked a huge number of individuals and governing bodies on 14 separate criteria, including personal and legislative transparency.

Iowa, Connecticut, Washington, California, and Nebraska ranked the most highly in this regard. Wyoming, Maine, South Dakota, North Dakota, and – worst of the worst – Georgia faired least well.

Using these rankings, the team realized that the most ethically uncompromised states also seemed to swear quite a lot, whereas the reverse was also true. 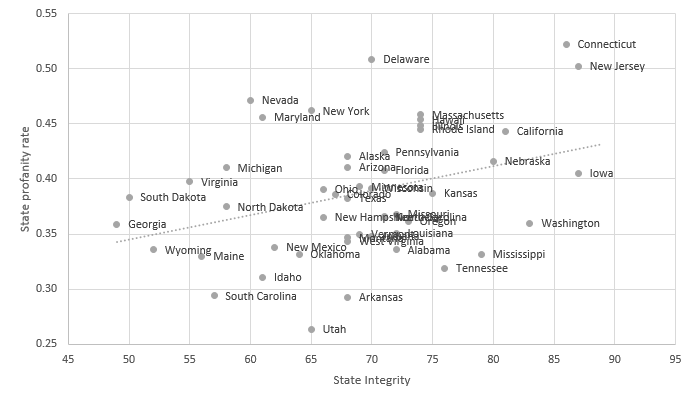 Of course, correlation isn’t always causation. Swearing a lot doesn’t make you automatically trustworthy, and being honest doesn’t necessarily mean you will drop a few shits or bollocks into the conversation all of a sudden.

Still, it’s an interesting correlation nonetheless. If it is in fact more than that, and more trustworthy people do actually swear more, well – thank f*ck for that, we suppose.

By the way, bonus points go to the researchers from Maastricht University and the University of Cambridge for naming their paper “Frankly, we do give a damn.”