This jarring scene was made by the famed 19th-century taxidermist Jules Verreaux, known for his vivid (read: insane) works of stuffed natural history specimens. Scientists restoring this piece recently discovered its realism is partially thanks to the fact that the human mannequin is made of real human remains.

Lion Attacking a Dromedary, formerly known as the Arab Courier Attacked by Lions, is a taxidermied diorama that has been at the Carnegie Museum of Natural History in Pittsburgh since 1898. This year will be the diorama's 150th anniversary since it was finished by Verreaux, so the museum decided to give it a renovation, beginning in April last year. As part of the preservation, they performed CT-Scans on the piece to assess the condition of the fragile taxidermied animals.

Unbelievably, the scans showed that the human mannequin's head actually has a real and complete human skull inside.

“The mannequin is purely a mannequin… except for the skull. It’s why the human face is as accurate as it is,” said the museum's conservator Gretchen Anderson, speaking to The Tribune Review.

Who’s head? Nobody knows. So far, the best theory going is that the skull was stolen from the Catacombs of Paris, an underground 18th-century ossuary, which contained the remains of millions of people. Although they doubt DNA will shed much light on the matter, the museum hopes to conduct some further research into the skull to trace its origins.

Lion Attacking a Dromedary depicts a merchant traveler trekking with his dromedary camel across North Africa, fighting off an attack by Barbary lions, a subspecies that went extinct in the early 20th century. The museum is also holding a free day-long symposium on Saturday, January 28 about the history and science of this remarkable work.

If you thought this was mad, Jules Verreaux’s work only gets more unethical. In the early 1980s, a student hitchhiking in Spain ended up in the natural history museum of a small Spanish town. In one of the unassuming exhibits, he found the stuffed body of an African Tswana warrior made by Verreaux. In 2000, the body was shipped to Botswana and given an official burial ceremony in Tsholofelo park aside a plaque reading "Son of Africa, Carried to Europe in Death, Returned Home to African Soil." 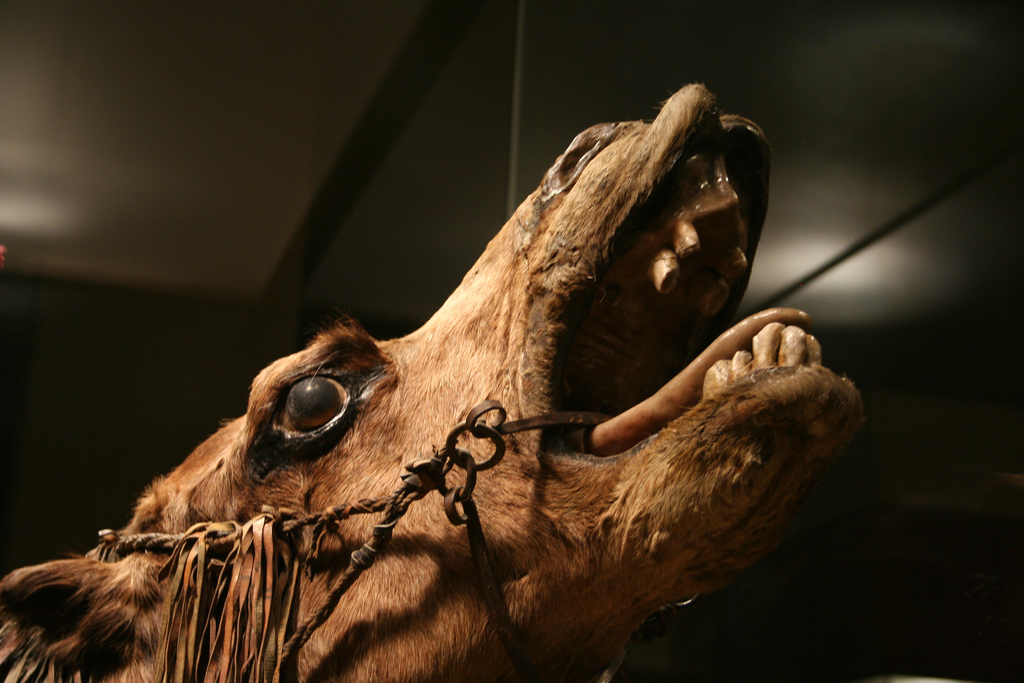 A close up of the camel in “Lion Attacking a Dromedary." Via Tsuji/Flickr (CC BY-NC-ND 2.0)