Be prepared to have your 6th-grade baking soda volcano project blown out the water because this kid from Denmark has potentially secured the most awesome school project of all time.

Daniel Rom Kristiansen, a 14-year-old from Birkelse in northern Denmark, was given homework about World War Two and ended up discovering a German fighter plane with the pilot's skeleton still inside the cockpit, BBC News reports.

Daniel's grandfather once told him about a German Luftwaffe plane that crashed near the family farm sometime in November or December, 1944. Although they kind of brushed this off as one of grandpa's “tall tales” from the war, Daniel and his father scoured the nearby land with a metal detector on the off chance.

"I hoped we might find some old plates or something for Daniel to show in school," his father, Klaus Kristiansen, told CNN.

Eventually, they hit something. A first glance showed some innocent looking scraps but it quickly became apparent there was something bigger lying even deeper within the boggy land.

After hours of digging using farming equipment, they eventually revealed an ME 109 Messerschmitt Luftwaffe fighter plane, papers, books, a wallet, three unused condoms, and the bones of a crew member. 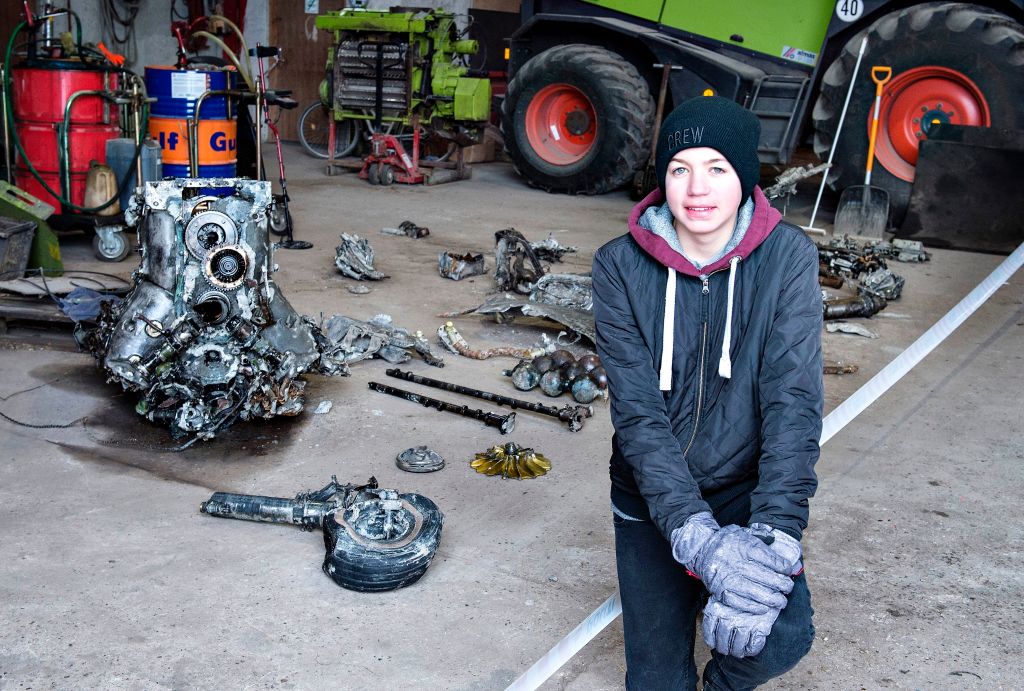 14-year-old Danish boy Daniel Rom Kristiansen stands proudly in front of his findings, quietly thinking "This better get be an A." Henning Bagger/AFP Photo via Getty Images

"It was maybe 2,000 to 5,000 pieces of a plane. And we found a motor... then suddenly we found parts of bones, and parts from [the pilot's] clothes,” his father told BBC News. "And then we found some personal things – books, a wallet with money... Either it was a little Bible or it was Mein Kampf – a book in his pocket. We didn't touch it, we just put it in some bags. A museum is now taking care of it. I think there's a lot of information in those papers."

The remains and scraps have now made their way to the Historical Museum of Northern Jutland, where they will study the findings and hope to confirm the lost pilot's identity. Historians at the museum currently suspect the plane came from the training base for German pilots in the nearby Danish city of Aalborg.

As for Daniel, if this guy doesn’t get an A, we will angrily head over to Denmark ourselves.