Two enormous Dutch-owned warships that sunk into the waters off the Java Sea in 1942 have completely disappeared, along with an American submarine and three British naval vessels.

An international investigation is underway to find out how this remarkable conjuring trick was performed, but at the moment, it’s likely that they were quickly salvaged by an unknown party for scrap metal.

“An investigation has been launched to see what has happened to the wrecks, while the cabinet has been informed,” the Dutch defense ministry said, as reported by the Guardian. “The desecration of a war grave is a serious offence.”

Next year will be the 75th anniversary of the Battle of the Java Sea, which ended in a humiliating and devastating defeat for the British, Dutch, American, and Australian forces in the region, and a huge territorial gain for the Japanese.

Three Dutch boats – HNLMS De Ruyter, Java, and Kortenaer – were among those to have sunk beneath the waves. Back in 2002, amateur divers came across the wrecks, and several professional expeditions to the site have sought to document and protect them ever since.

This year’s expedition blasted the seabed with sonar, and although the imprints of the three wrecks were there, two of the ships had completely vanished. HNLMS Kortenaer is still present, but a huge chunk of it has been stripped away.

Scrap salvaging is a common practice in the region, thanks to its reputation as a warship graveyard. Until now, however, only smaller ships have fallen victim to the scrappers. This is theft on a far larger scale, the likes of which haven’t really been seen before. 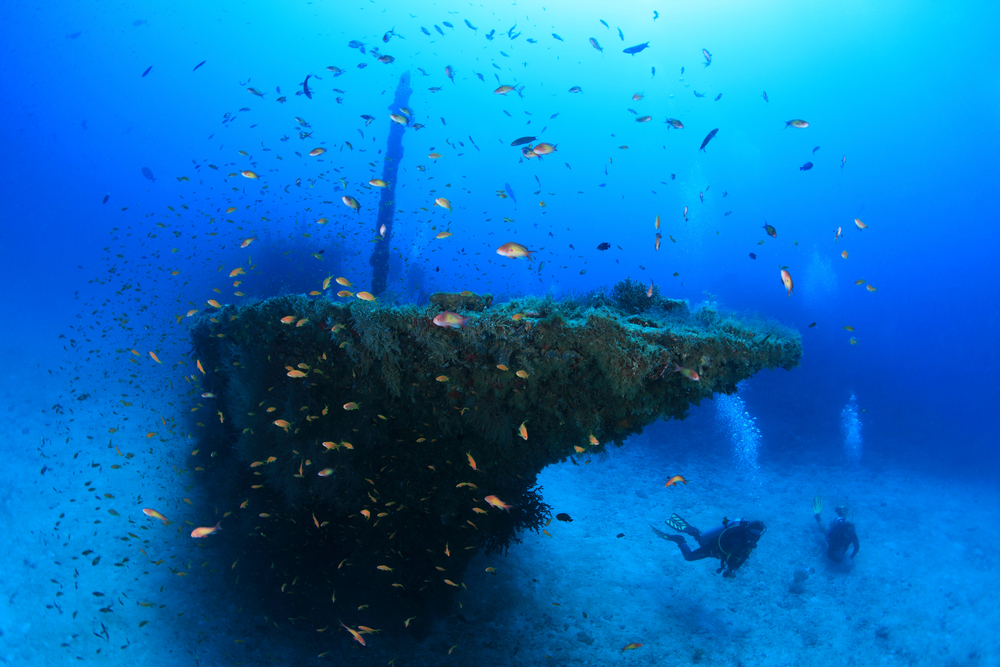 Dynamite-wielding scuba divers wouldn't have been enough to remove the entirety of these battleships. aquapix/Shutterstock

Additional reporting by the Guardian has also revealed that three British ships have disappeared as well, along with an entire US submarine. The HMS Exeter, Encounter, and Electra also sunk in 1942 by the Japanese, and was found in the mid-2000s. Now, it appears they have been thieved along with the Dutch vessels.

It’s safe to say that this isn’t the magic tricks of amateurs at play here. In order to remove these vast, hulking metal masses, an unprecedentedly large and efficient operation by scrappers would have to have taken place.

According to a report by the New Straits Time Online, people posing as fishermen are using dynamite to initially fragment the wrecks into more easily manageable pieces. Far from just removing literal pieces of history, this activity also threatens the welfare of local marine life.

Experts have also told BBC News that large cranes would have been required for an extended period of time, and it’s unlikely that it did not go unseen. The plot thickens!

As it stands, the culprits are still at large. Ideas on a postcard, dear readers.