You probably haven’t thought about it much before, but on the big screen, baddies are often depicted with skin conditions and traits – warts, bulbous noses, dark circles under their eyes, even albinism and alopecia – as an effective way to immediately indicate their villainy.

A team of US dermatologists say that depicting characters with dubious morals as having these skin conditions is damaging to people who actually suffer from them by negative association, and Hollywood needs to update its thinking.

In their study, published in the Journal of the American Medical Association Dermatology, researchers looked at the all-time top 10 heroes and villains from the American Film Institute’s (AFI) "100 Greatest Heroes and Villains List" to evaluate dermatological traits and the frequency with which they appear.

Their findings showed that skin conditions appeared significantly more frequently in villains than heroes. They found six out of the top 10 villains had some form of dermatologic condition, while only two of the heroes did, and they were incidental and not part of the character.

"The results of this study demonstrate Hollywood's tendency to depict skin disease in an evil context, the implications of which extend beyond the theater,” the authors write in their study. “Specifically, unfairly targeting dermatologic minorities may contribute to a tendency toward prejudice in our culture and facilitate misunderstanding of particular disease entities among the general public." 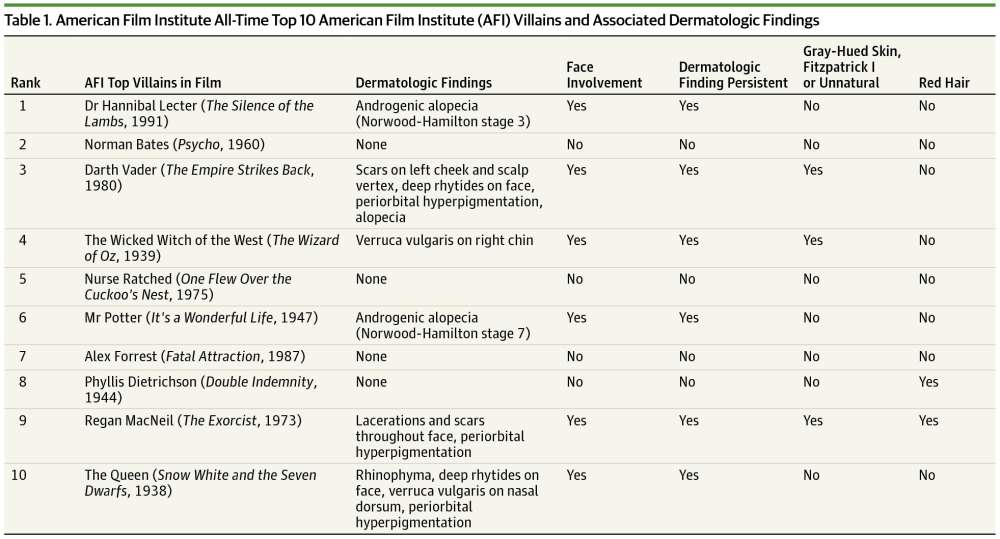 Often the baddies had more than one of these traits. Darth Vader demonstrates alopecia and multiple scars, Regan from The Exorcist has dark circles under her eyes and scars, the Evil Queen in Snow White and the Wicked Witch of the West from the Wizard of Oz both have facial warts. The authors also discussed the high frequency of albinism, or very pale skin, in film as a way of communicating evil quickly and effectively – think Voldermort in Harry Potter, Dr Evil in Austin Powers, Silas in The Da Vinci Code, or The Albino in The Princess Bride.

Of the top 10 heroes, only Indiana Jones and Rick Blaine from Casablanca had facial scars and that is because the actors portraying them, Harrison Ford and Humphrey Bogart respectively, already had them.

“It is something that has been perpetuated in film, sometimes maybe even unintentionally, but it is something that has become more and more prevalent over the years,” Julie Amthor Croley, co-author of the research from the University of Texas, told the Guardian. “It is not only perpetuating this tendency towards discrimination towards people with skin disease but it also does affect the person on an individual basis.”

She makes a good point. Imagine If you have a condition that is beyond your control, like alopecia or albinism, and you repeatedly see these traits represented on screen as reinforcing someone's villainy.

Although this type of visual shorthand has been used for hundreds of years, in fairy tales, books, and films, the authors suggest it's about time Hollywood recognizes how this may affect the lives of real people with these traits and try to challenge these stereotypes.