Brain scans conducted on patients who died shortly after contracting COVID-19 indicate that the virus may trigger inflammation in the brain, ultimately damaging blood vessels and causing them to leak. Interestingly, the SARS-CoV-2 virus itself was not detected in the tissue surrounding these damaged blood vessels, indicating that it is the body’s immune response, rather than the pathogen itself, that generates these harmful effects.

A number of recent studies have hinted at the ability of COVID-19 to disrupt and cross the blood-brain barrier, yet scientists have yet to determine if the virus actually enters the brain. What seems clear, however, is that infected patients regularly experience neurological symptoms such as headaches, dizziness, cognitive dysfunction and a loss of the sense of smell.

To learn more about how the illness affects the brain, a team of researchers used an ultra-sensitive magnetic resonance imaging (MRI) scanner to peer inside the skulls of 19 recently-deceased COVID patients. Publishing their findings in the New England Journal of Medicine, the study authors reveal the presence of several abnormalities within certain key brain regions.

Within the olfactory bulb, which controls the sense of smell, and the brainstem, which coordinates automatic processes such as breathing and heart rate, the researchers noted a large number of light and dark spots. The light areas represent hyperintensities, and are a hallmark of inflammation, while the dark spots, called hypointensities, typically indicate bleeding.

A closer inspection of these features under a microscope revealed that blood vessels in the lighter regions had become thinner and leaky, allowing certain blood proteins to escape. This, in turn, triggered an immune response, indicated by the presence of immune cells such as microglia and T cells in the surrounding tissue. 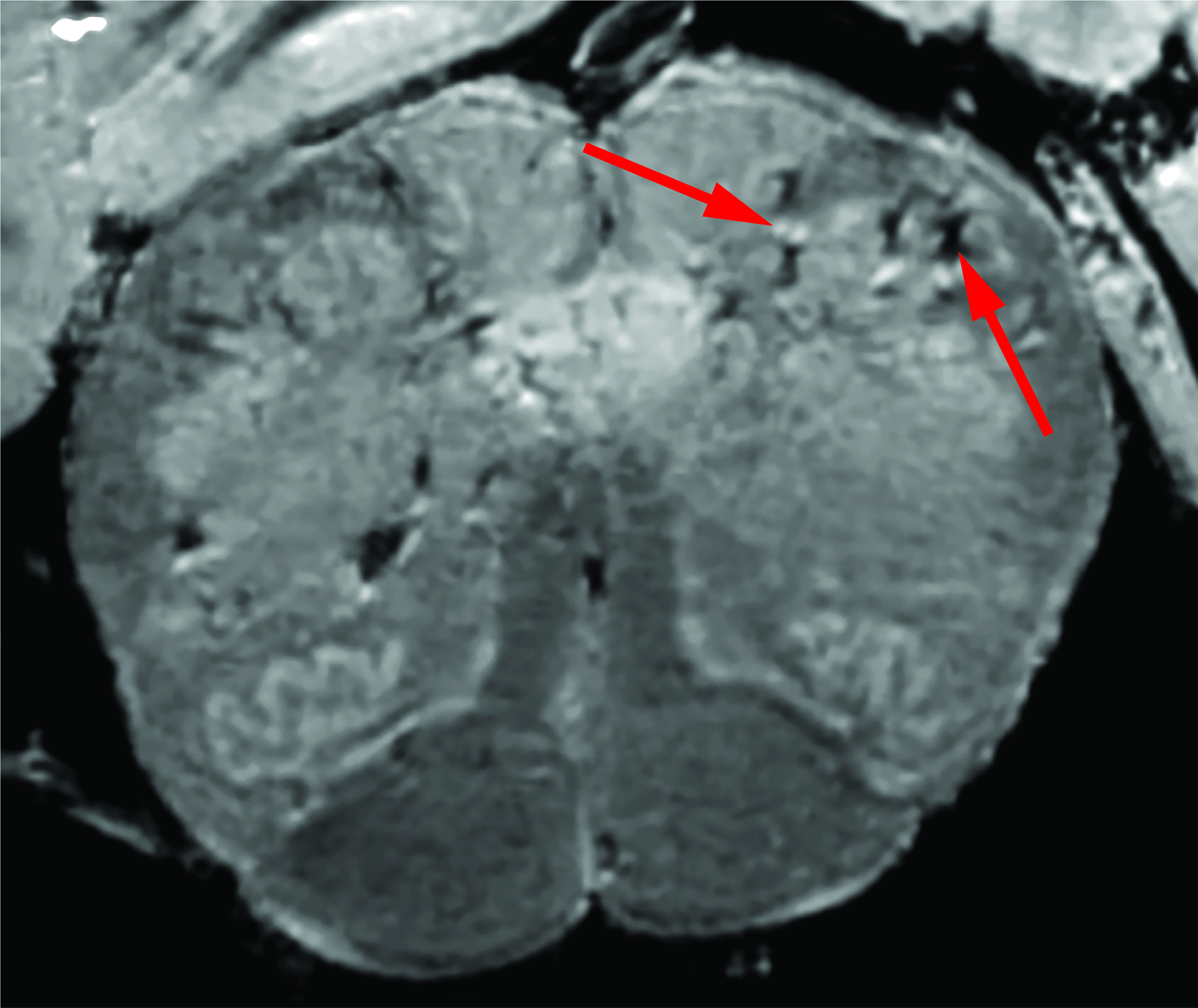 Arrows point to light and dark spots that are indicative of blood vessel damage observed in the study. Image courtesy of NIH/NINDS

In a statement, study author Avindra Nath explained that “the brains of patients who contract infection from SARS-CoV-2 may be susceptible to microvascular blood vessel damage. Our results suggest that this may be caused by the body's inflammatory response to the virus."

“Originally, we expected to see damage that is caused by a lack of oxygen. Instead, we saw multifocal areas of damage that is usually associated with strokes and neuroinflammatory diseases," he continued.

The patients involved in the study had an average age of 50 years old, and many suffered from underlying health issues such as obesity, diabetes, or cardiovascular disease. All died between March and July 2020, having survived for a maximum of two months after becoming infected.

While many questions still remain as to how the virus affects vital organs and systems in different patients, Nath concludes that "our results suggest that the damage we saw may not have been not caused by the SARS-CoV-2 virus directly infecting the brain."

For more information about COVID-19, check out the IFLScience Covid-19 hub where you can follow the current state of the pandemic, the progress of vaccine development, and further insights into the disease.