It’s thought up to 40 percent of retired NFL superstars could be suffering from traumatic brain injury (TBI). This figure is likely to be just as high among certain military personnel and athletes such as boxers, wrestlers, and ice hockey players. Despite this, we still know very little about how repeated blows to the head can cause severe long-term health problems.

So, scientists at Imperial College London have created a 3D model to show what happens to an American footballer’s brain when it collides forcefully with another player. The study, funded by the Imperial College Research Fellowship Scheme, the National Institute of Health Research, and the Medical Research Council, was published in the journal Brain.

The researchers hope to further the understanding of how TBI is linked to chronic traumatic encephalopathy (CTE). CTE is a degenerative disease of the brain found in people with a history of repetitive brain trauma, resulting in memory loss, confusion, impaired judgment, aggression, depression, and progressive dementia. It used to be known as “punch drunk” as it was first associated with boxers who appeared intoxicated due to the symptoms of CTE. The disease also causes a long-term build-up of proteins called tau that is associated with the degeneration of brain tissue and declining health.

"In TBI, the force of the blow shakes the brain, which is similar in texture to jelly,” Dr Mazdak Ghajari, an engineer who co-led the study at Imperial College London, said in a statement. “This shaking process deforms the brain tissue and can cause ruptured blood vessels and damaged nerve cells, and more severe complications later on."

"We've been able to replicate those initial moments when the 'jelly' brain is first deformed on impact, by combining engineering principles and medical knowledge," he added. "This is providing us with new insights." 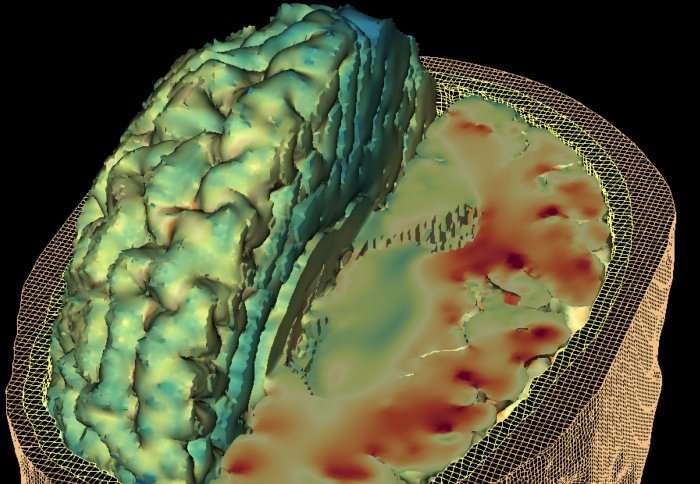 The image above shows the 3D model of an American footballer's brain after a heavy impact. The red areas represent the parts most damaged from the trauma. Interestingly, just as they had suspected, these areas were also the locations where you can find high concentrations of tau deposition in the brains of footballers with dementia.

The data for the model was gathered from a wide variety of real-life sources, including information about actual collisions that occurred during NFL games, postmortems of footballers with CTE, physical specimens of brains with CTE, MRI brain scan data of 97 patients with TBI, collision reconstructions with dummies, and the medical records of a people who sustained head trauma during accidents. This was then fed into the MRI scans of a healthy 34-year-old male’s brain to understand the mechanical forces at the time of collision.