The Denisovans are a mysterious species of humans who once lived across Siberia and East Asia. Only known from a handful of bone fragments and the DNA they left behind in living humans, there is not much for researchers to go on. But the discovery of two ancient human skulls in China might just change this.

In 2007, researchers uncovered a haul of flint tools dating to between 105,000 and 125,000 years ago, and nestled among the same layer of sediment, the fragments of two partial skulls were unearthed. Now, a new paper detailing this find, and published in Science, has suggested that they don’t fit with any of the currently known fossils of archaic human species from that region.

When the discovery of Denisovans was first announced in 2010, it stunned the archaeological world, not least because while we have their DNA, no physical evidence larger than a piece of finger bone exists. The new partial skulls seem to show a mix of features, leaving some to speculate that they could indeed be the first skulls ever discovered of this puzzling species. It has to be pointed out that, at the current time, this is just speculation, but if it can be proven, would be a massive revelation. 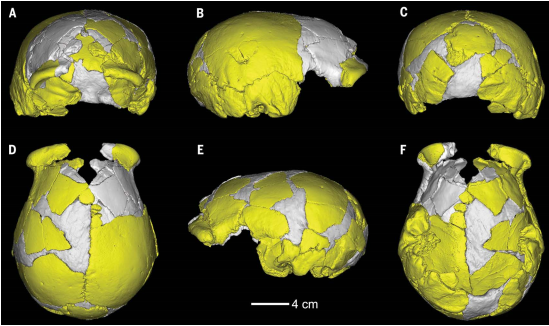 The first, and most complete cranium of what may have been a Denisovan, discovered in China. Zhan-Yang Li et al. 2017

Curiously, the two fossil crania also bear resemblances to another early archaic human skull that was discovered 850 kilometers (530 miles) north of this latest find, also dating to roughly 100,000 years ago. It suggests that they may have all been regional members of an ancient human species, but what that the species looks like is a bit of a mystery.

The mix of features, somewhere between modern humans and Neanderthals, as well as the dates intriguingly point towards the possibility that we could be looking at skulls of the enigmatic Denisovans. We know the species existed in East Asia sometime between 100,000 and 50,000 years ago, and that they mated with both humans and Neanderthals over this period, but to date, we have scant physical evidence for them, just a few small bones from the hand.

The authors of this latest paper are careful not to make this claim, however, and confirmation will have to wait until further genetic tests have been carried out, or fossils found. Researchers have already tried to extract DNA from the skulls, but unfortunately to no success. Despite them being significantly different from Neanderthal skulls found in both Western Europe and the Middle East, it could still transpire that the skulls simply represent a regional difference in the species, or perhaps yet another unknown species of archaic human who once roamed across Asia.